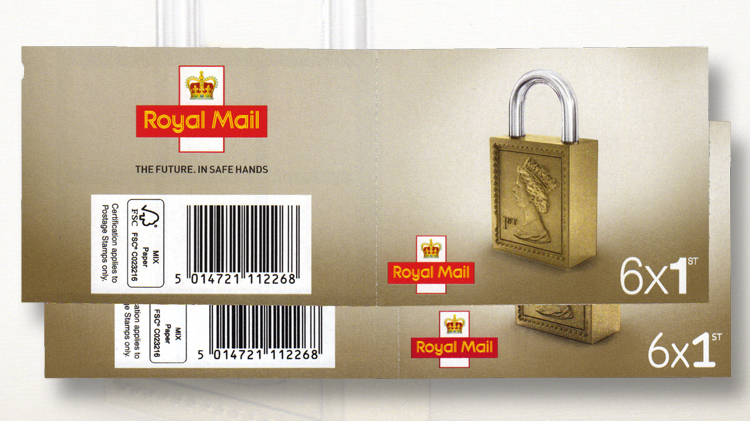 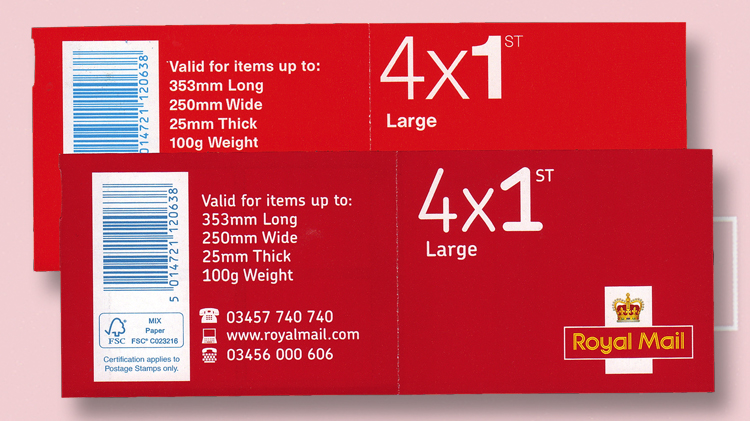 The top booklet cover shows the Helvetica font and the original Royal Mail red color in use since 2013. The bottom cover has the corporate Chevin font and the darker shade of red introduced in October 2016. 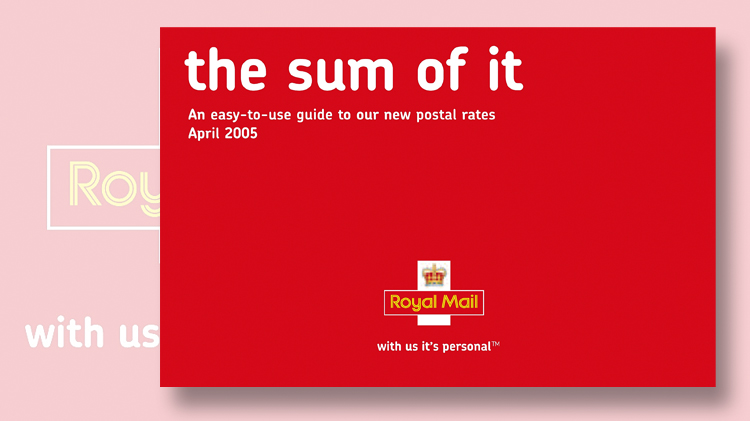 Royal Mail has been using the Chevin font for many years. Shown here is part of the cover to the rate guide from April 2005. 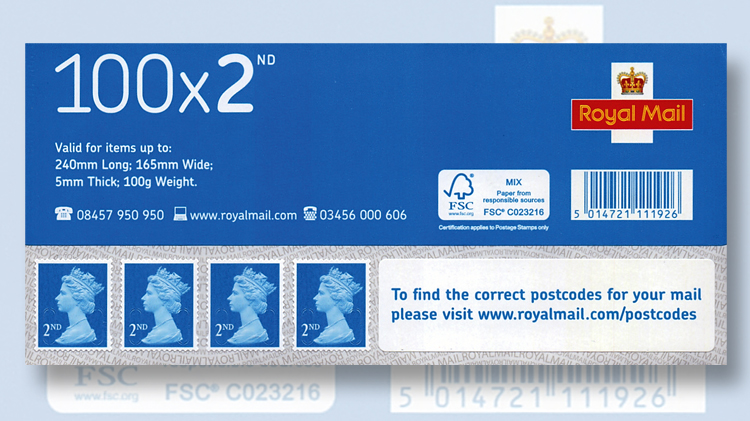 Business sheets are a convenience for businesses that use a lot of postage stamps. The top panel, shown here with the new Chevin font, contains descriptive information and four Machin definitive stamps. Four panels of 24 stamps each are attached at the bo 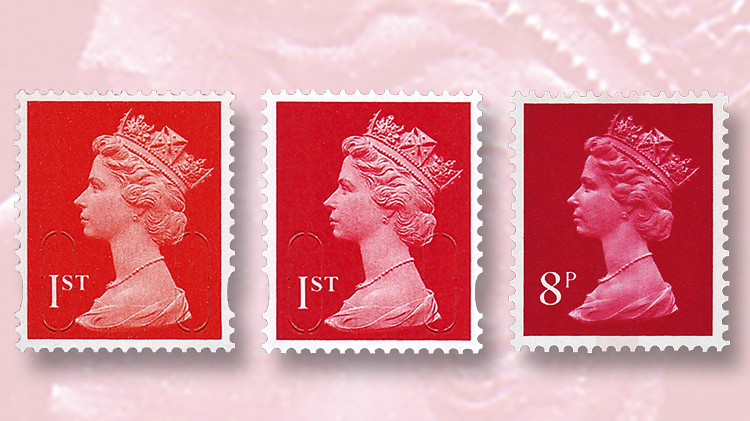 At left is the Royal Mail red first-class Machin issued in 2013. In the center is the revised shade that better matches Royal Mail’s branding. This new color is close to the shade of red first used for the 8-penny Machin issued in 1973, shown at right.
Previous
Next

In 2016, Royal Mail decided to update several of its products to better reflect its corporate branding. The result was a new design for one of the stamp booklets, a change of typeface on booklets and business sheets, and a slight change of color for the first-class Machin definitive stamp.

The first change came on July 28, 2016, when a new cover was introduced for the booklet containing six first-class Queen Elizabeth II definitive stamps, known as Machins.

The former plain red cover was replaced by a gold cover featuring a padlock with the image of a Machin stamp on its front.

The phrase “The Future. In Safe Hands” appears on the back cover.

Royal Mail said: “Its padlock design is part of a wider Royal Mail brand campaign to highlight the concept of security and trust. The stamp book image aligns with similar new messages carried on Royal Mail vehicles and brochures.”

In Great Britain, the postal system competes with many firms vying for customers. This emphasis on security is an attempt by the privately owned Royal Mail to differentiate itself from competitors.

The Machins inside the booklet of six reverted to Royal Mail red, Royal Mail’s name for the color introduced in January 2013 and temporarily replaced in 2015 with lilac. The lilac stamps (Scott MH457) were part of the “Long to Reign Over Us” celebration of Queen Elizabeth II becoming the longest-reigning British monarch on Sept. 9, 2015.

The sheets have five Z-folded panels and are designed for businesses that use a large quantity of stamps. The top panel has the necessary information and four or five stamps, with the remaining stamps evenly distributed over the other panels.

Royal Mail determined that the color introduced for some stamp products four years ago was not a good match for the color on its vehicles, mailboxes, and publications.

In October, the Machin stamps in booklets and business sheets were converted to a new shade of red, darker and less yellow than the previous one. The color of the booklet covers and business sheet top panels was changed to match the stamps.

The self-adhesive counter sheets of first-class stamps have not yet been changed to the new shade, but presumably they will be.

The editors of the Scott Standard Postage Stamp Catalogue have not yet decided whether to give these new stamps a separate listing.

Observant collectors who compare the new stamps with the earlier ones might notice that the new first-class stamp is close to the color of the 8-penny Machin issued in 1973 (Scott MH64) and the 26p Machin issued in 1987 (MH131), both of which are described as red. The 2013 version of the first-class stamp (MH426, MH440) is described as bright red.

The other major change introduced Oct. 20 was a new font for booklet covers and business sheet panels. The angular Helvetica font that was used for many years was replaced with Chevin, a rounded font that has been Royal Mail’s corporate font since 2007 and was used for a few years before then.

Chevin was developed by Nick Cooke in 2003 and is named after the hill that overlooks the town of Otley, near Leeds in north-central England. The font was not specifically designed for Royal Mail, which is now its most prominent user.

It seems a bit odd that the official postal service is a brand, but in a competitive environment it needs to make itself known in a positive and consistent manner. These changes reinforce the branding that Royal Mail has been developing for many years.