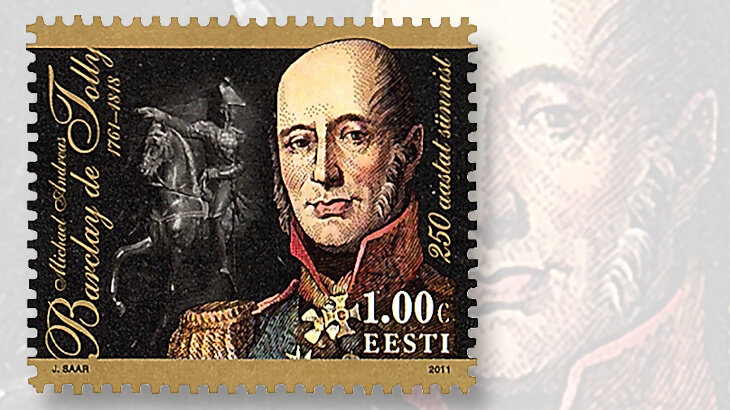 It’s Friday afternoon, and the editors are winding down another busy week of philatelic reporting. The presses, however, are cranking up to print the June 26 issue Linn’s Stamp News that goes in the mail Monday, June 12 to subscribers. Here we present a few teasers of exclusive content to whet your philatelic appetite.

Why is a Russian born in Lithuania depicted on an Estonian stamp?

Rick Miller, In Stamps of Eastern Europe, answers this intriguing question via his engaging review of the fascinating, multifaceted life of Field Marshal Michael Andreas Barclay de Tolly (1761-1818), who is depicted on a handsome €1 stamp issued by Estonia in 2011.

Do you have United States cacheted first-day covers in your collection? Are you curious about who produced the artwork on your covers? In this month’s First-Day Covers column, Lloyd de Vries points readers to resources that will give them a fuller appreciation of the beauty captured on these compact works of art.

Ancient Palmyra: preserved forever on a Syrian stamp issued in 1940

Middle East Stamps columnist Ghassan Riachi showcases the stamp portraying the ruins of the ancient city. “At the height of its glory,” Riachi explains, “Palmyra had more than 200,000 inhabitants. It was home to Arabs, Jews, Greeks, and various other clans.”