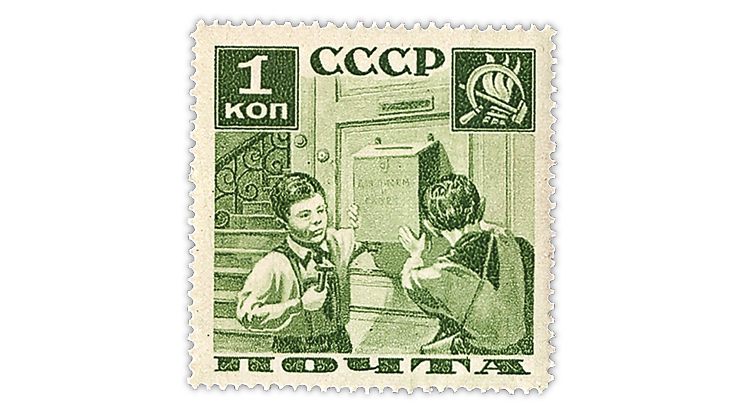 The 1936 Soviet Union set of six Pioneers stamps (Russia Scott 583-588) is of interest to some Scouting topical collectors.

The market for stamps of the Union of Soviet Socialist Republics is down from its high-water mark of a dozen years or so ago. Prices have generally dropped, but demand remains strong for some issues.

Scouting is a popular topical collecting area. While the Soviet Union did not participate in the world Scouting movement, it had its own scouting organization: the Vladimir Lenin All-Union Pioneer Organization or Young Pioneers or just Pioneers for short.

The Pioneers mirrored Scouting in other countries in many ways, including its motto “Always Prepared.” The uniform was the children’s school uniform with the addition of a red neckerchief. Some Scouting topical collectors extend their interests to include the Pioneers.

In April 1936, the Soviet Union issued a set of six stamps commemorating the Pioneers (Russia Scott 583-588). The designs show Pioneers preventing theft from a mailbox, preventing destruction of property, recovering a stranded kite, and a girl Pioneer saluting.

The Scott Classic Specialized Catalogue of Stamps and Covers 1840-1940 values the set at $58.50 in unused, hinged condition; $16 in used condition; and $135 in mint never-hinged, condition.

Most of the sets offered for sale as used are actually canceled-to-order. You can find a CTO set for about $10 or less.