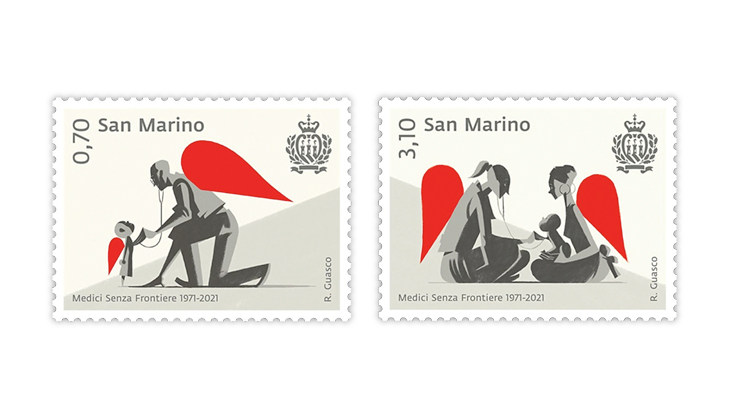 A pair of San Marino stamps commemorating the 50th anniversary of Doctors Without Borders won the Asiago international award for philatelic art for stamps issued in 2021.

The Asiago awards also have been called the Oscars of philately.

“The Asiago Philatelic Award for the most beautiful form of philatelic art is one of the most renowned philatelic competitions in Europe and in the world,” said Mariusz Dawid of Poland’s postal administration (Poczta Polska), who spoke at the award ceremony.

The Asiago award jury was almost unanimous in selecting this pair of stamps as the best issue of 2021, saying that the social meaning was well expressed and emphasized by the designs “centered on human beings and on the wings of their heart.”

Guasco, the designer, said: “I have chosen to focus on what for 50 years has been the mission of this International Humanitarian Organization — human beings and their loving care, choosing to bring help and intervention where it is more difficult by simply listening … a heart that beats “.

In receiving the city of Asiago trophy for the stamps, Gian Luca Amici, general manager of the San Marino postal administration (Poste San Marino) said he was honored by the “recognition that confirms the goodness of the choices of our Republic and that, in this specific case, gives visibility to the commendable work of Doctors Without Borders for the care of people.” The trophy was designed by Italian sculptor Gio Pomodoro.