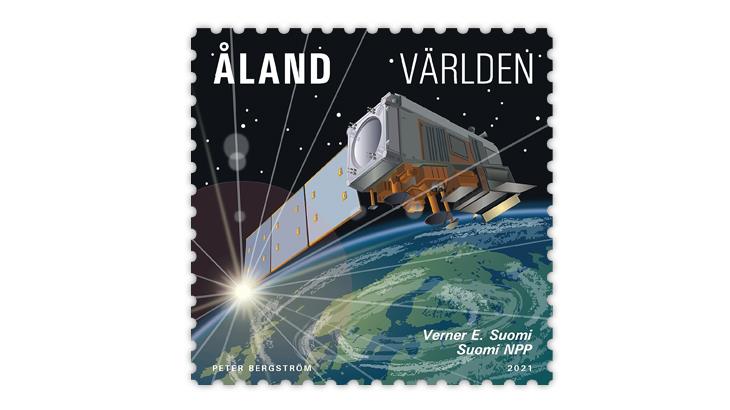 Aland will issue a stamp March 25 featuring the satellite named after Verner E. Suomi. Known as “the father of satellite meteorology,” Suomi was born in the United States to parents who had emigrated from Aland. 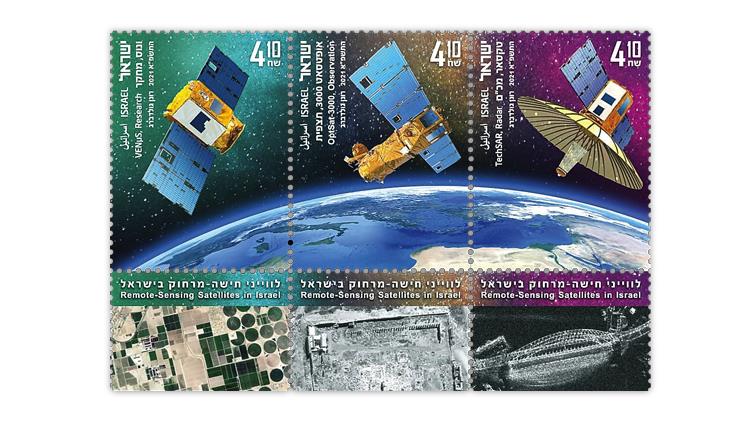 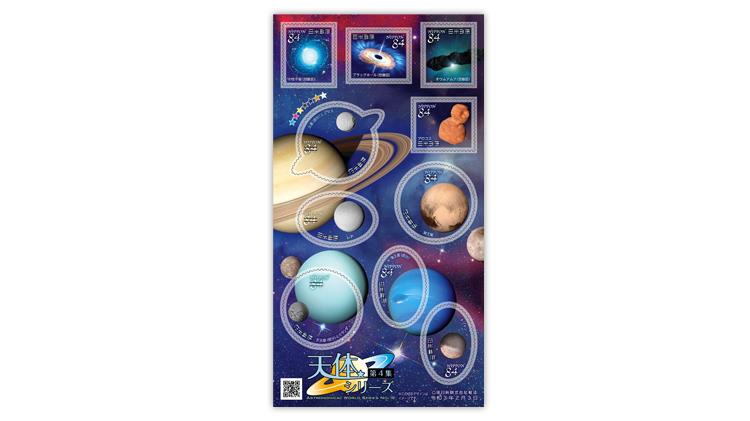 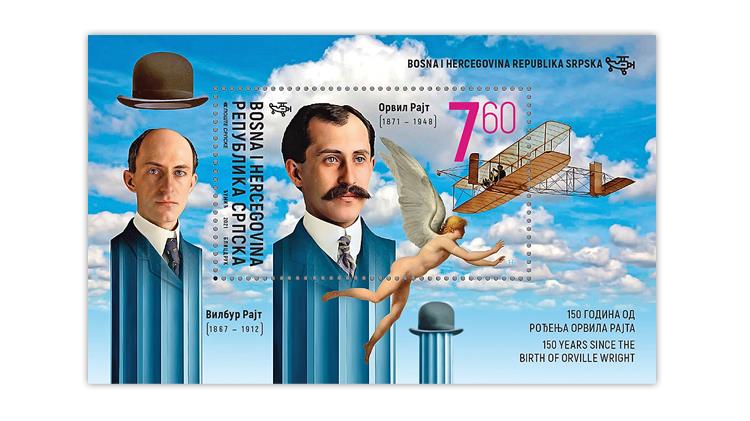 Bosnia and Herzegovina (Serb Administration) honored aviation pioneer Orville Wright on this souvenir sheet marking his 150th birth anniversary. Orville is shown on the stamp, and his brother, Wilbur, is pictured in the selvage.
Previous
Next

An upcoming stamp from Aland commemorates a weather satellite named after an American of Aland descent, Verner E. Suomi (1915-95). Aland Post will issue the stamp March 25.

In announcing the new issue, Aland Post said that Suomi, known as “the father of satellite meteorology,” contributed “to laying the foundations for today’s weather satellites, essential for providing weather forecasts.”

Born in Minnesota to parents who had emigrated from Aland, Suomi was an educator, inventor and scientist.

In Suomi’s obituary in the Aug. 1, 1995, The New York Times, David Stout wrote: “His most important invention may have been the spin-scan camera, which he developed in 1964. Mounted on satellites, spin-scan cameras transmit images back to earth from 25,000 miles above the Equator and have revolutionized weather forecasting and studies of the earth’s atmosphere.”

Among the honors and recognition Suomi received for his work was NASA’s renaming of the NPP (National Polar-orbiting Partnership) Earth-monitoring satellite after him, Suomi NPP, in 2012. The satellite was launched Oct. 28, 2011.

Aland’s stamp shows Peter Bergstrom’s illustration of the satellite in orbit over Earth.

Inscribed in two lines in the lower right of the design are “Verner E. Suomi” and “Suomi NPP.” In the upper right is “Varlden,” the Swedish word for “world.” This indicates that the stamp pays the international rate, currently €2.20.

Southern Colour Print of New Zealand printed the stamp by four-color offset in sheets of 30.

The online Merriam-Webster dictionary defines remote sensing as “the use of satellites to collect information about and take photographs of the Earth.”

The three 4.10-shekel stamps are se-tenant (side-by-side) in a composite image showing the satellites above Earth.

Starting on the left, the first stamp depicts an OptSat 3000 satellite built by Israel Aerospace Industries. According to the new-issue announcement from the Israel Philatelic Service, such satellites “are utilized by Israeli security forces and produce very high-resolution images to fulfill Israel’s national needs.”

Illustrated on the middle stamp is TechSAR, Israel’s first satellite to use synthetic aperture radar. According to the Israel Philatelic Service, this type of radar system can “illuminate” the ground, enabling it to produce images in the day or night and “penetrate blocking factors such as clouds or vegetation.”

The last stamp pictures Venus, a small observational satellite that was a joint project of the Israel Space Agency and the French National Centre for Space Studies (CNES).

Shortly before the satellite’s launch in August 2017, Judy Siegel-Itzkovich wrote in the Jerusalem Post: “The Venus, the world’s smallest satellite of its kind, was built in the last few years by Israel Aerospace Industries. It will observe fields and nature from space for environmental research, monitoring land conditions, forestry, agriculture, the quality of water sources and more.”

The stamps are in a pane of nine with attached tabs (labels) showing images taken by the satellites. Cartor Security Printing printed the issue by offset.

The stamps in the new pane all bear the same denomination, 84 yen, but are in various shapes, including rectangles, circles and ovals. One stamp, shaped like the rings of Saturn, shows Mimas, the smallest of Saturn’s more than 80 moons.

The other stamps depict various planets, stars and a black hole. Also, like the other panes in this series, the new pane includes holographic foil.

The 150th birth anniversary of Orville Wright is remembered on a souvenir sheet issued Jan. 29 by Poste Srpske for Bosnia and Herzegovina (Serb Administration).

Orville was born Aug. 19, 1871, in Dayton, Ohio. He and his brother, Wilbur, made history Dec. 17, 1903, by making the first successful flight in a powered, heavier-than-air aircraft. Orville piloted the Wright Flyer on this 12-second flight.

The souvenir sheet contains a 7.60-mark stamp showing Orville, the Wright Flyer and a winged figure, perhaps the Greek mythological character Icarus who tried to fly with artificial wings. The selvage shows Wilbur and the Bowler hats the brothers wore.