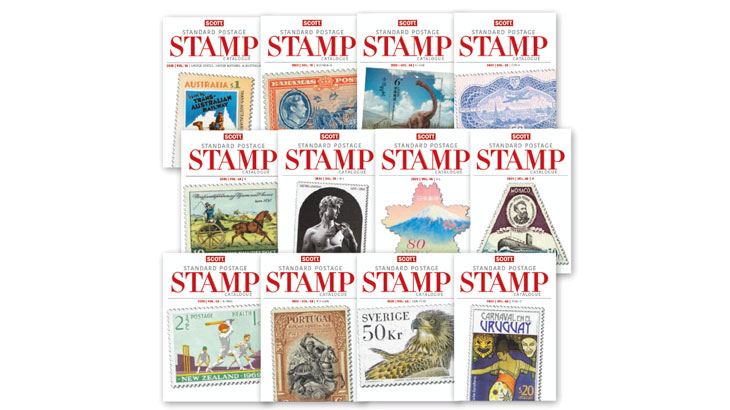 The covers of the 12 volumes that make up the Scott Standard Postage Stamp Catalogue. For the 2020 catalogs the covers highlight one stamp issue for a stamp-issuing entity included within each volume. Preorders are being accepted for the 2020 catalogs via www.amosadvantage.com. 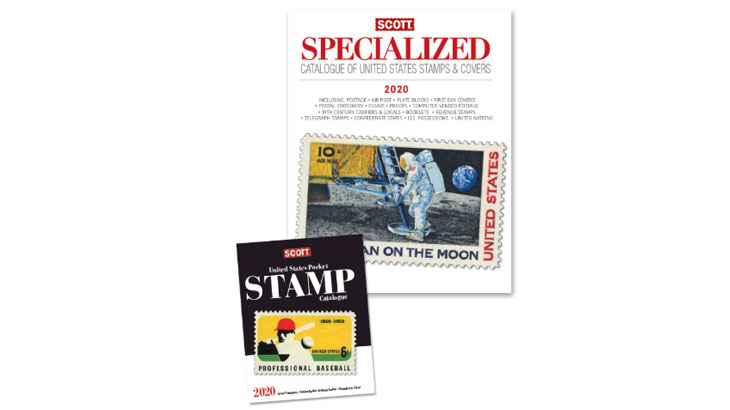 The cover designs for the 2020 Scott Specialized Catalogue of United States Stamps and Covers and the United States Pocket Stamp Catalogue feature the 1969 United States 10¢ First Man on the Moon airmail stamp (Scott C76) and the 1969 6¢ Professional Baseball stamp (1381), respectively.
Previous
Next

Another catalog season is upon us. We continue the journey of the 151-year history of the Scott catalogs, with the 2020 volumes being the 176th edition of the Scott Standard Postage Stamp Catalogue, and this year we introduce a new look for the covers of each volume.

Highlighted on the covers are single stamps from a stamp-issuing entity found in that volume. Each stamp is set with a light shadow on a white background with red and gray typography used for the text.

The two stamps shown for Vols. 5A and 5B appear to be battling each other. That was unintentional but a fun dynamic. The Vol. 5A cover shows the 1969 New Zealand 2½¢+1¢ Boys Playing Cricket stamp (Scott B77) and the Vol. 5B cover features the 1927 Portugal 2-centimo Goncalo Mendes da Maia stamp (422). Vols. 5A and 5B will be published in August.

The cover design for the 2020 Scott Specialized Catalog of United States Stamps and Covers highlights the iconic 1969 10¢ First Man on the Moon airmail stamp (Scott C76). The Scott U.S. Specialized catalog will go on sale in early October.

The U.S. 1969 6¢ Professional Baseball stamp (Scott 1381) is pictured on the cover of the 2020 Scott United States Pocket Stamp Catalogue that will be published in November.

The cover of the 2020 Scott Classic Specialized Catalogue of Stamps and Covers 1840-1940 will be announced later this spring.

For more information on how to preorder the 2020 Scott catalogs, visit online at www.
amosadvantage.com/scottcatalogue or call Amos Media at 800-572-6885.