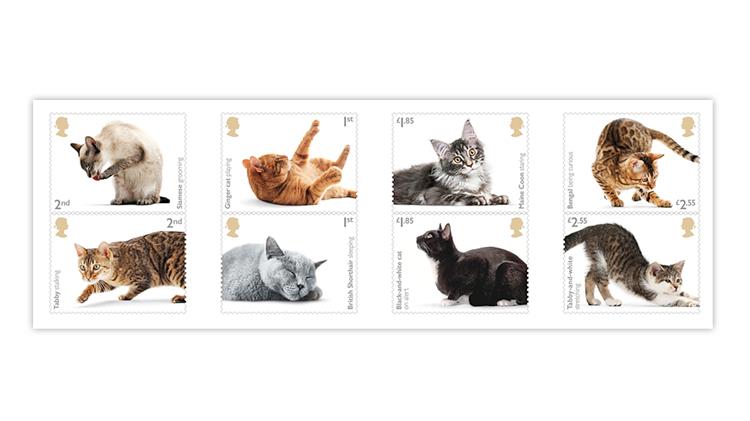 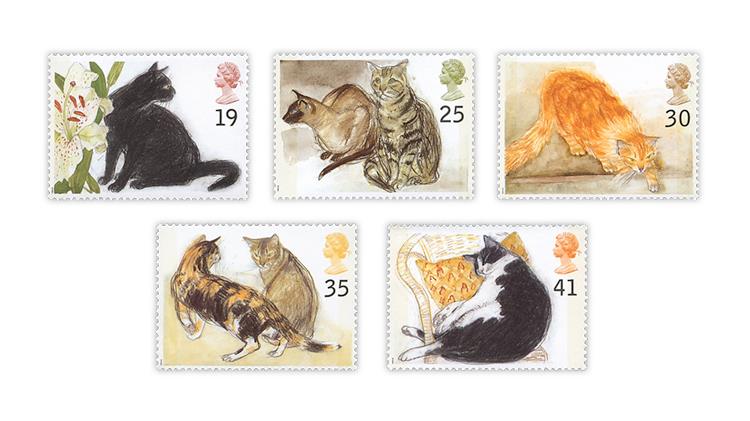 Among the many examples of cats on stamps from Great Britain is this 1995 set of five dedicated to house cats.
Previous
Next

Royal Mail said in a press release that the stamps “are sure to melt the hearts of stamp and cat enthusiasts everywhere.”

The designs consist of photographs of cats in action against a white background. Text on either the left or right side of each stamp gives the name of the breed or type of cat and the activity being performed.

The £1.85 stamps feature a Maine coon staring and a black-and-white cat on alert, respectively. On the £2.55 stamps, a Bengal cat is shown being curious, and a tabby-and-white is pictured stretching.

A presentation pack offered by Royal Mail contains a guide to some cat breeds in addition to information on the history of the human-cat relationship and the meanings behind different tail positions for cats.

The Siamese cat, according to the presentation pack, does not like to be left alone due to its highly charismatic and demanding personality. Almond-shaped eyes and a graceful appearance identify this ancient oriental breed.

In contrast, the presentation pack notes the undemanding nature of the British shorthair, calling the breed quiet and dignified.

The Maine coon has a longer coat and is known for its large size and long tail. The presentation pack says this breed “has a sweet, affectionate and playful personality.”

The presentation pack also labels the Bengal cat as playful. This breed, characterized by its spotted or marbled coat, was developed by crossing the domestic cat with the wild Asian leopard cat.

Cats have appeared on several stamps from Great Britain. One of the many examples includes a 1995 set of five stamps (Scott 1586-1590) dedicated to house cats, similar to the stamps in this June 9 issue.