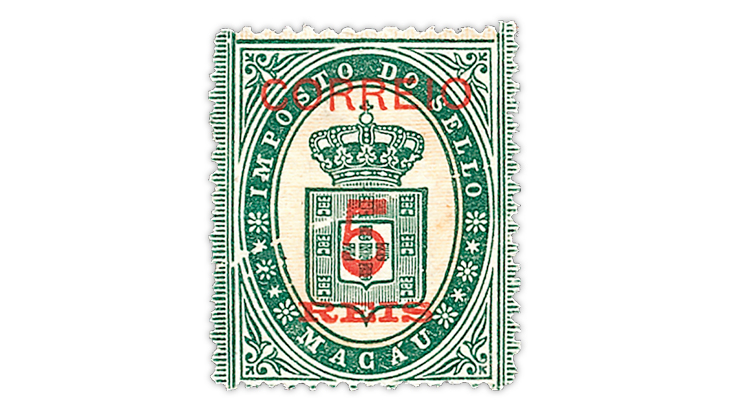 Macao was a Portuguese colony on the western Pearl River delta on the coast of China. It included the small islands of Coloane and Taipa and comprised 44.5 total square miles of densely populated territory.

The Portuguese arrived in 1513 and received a permanent lease on Macao in 1557. In 1976, Portugal changed Macao’s status from an overseas province of Portugal to Chinese territory under Portuguese administration. Portugal transferred Macao to China on Dec. 20, 1999. Today, it is a special administrative region of the People’s Republic of China.

The stamps of Macao are of interest to collectors of both Portugal and area and China.

The stamps were locally produced provisionals created by perforating Coat of Arms revenue stamps between the vignette and the value plate and overprinting new values and “Correio” (post office) and “Reis” over the central design portion of the stamps.

The unused portion of the stamp below the new perforations was usually removed before the stamps were used. The Scott Classic Specialized Catalogue of Stamps and Covers 1840-1940 refers to these redundant portions as “labels.”

Stamps with the labels still attached are listed as minor number varieties and are much more valuable than examples without the labels.

The Scott Classic Specialized catalog values the set of three unused stamps without gum as issued at $70. A set of used stamps is valued at $37.

This is not a particularly difficult set to find; however, it is difficult to find in very fine grade with nice, even perforations.

The perforating job was done rather slapdash, especially on the 10r and 40r stamps, and ragged, uneven perforation teeth are the norm.

A set of the three stamps with moderately clean perforations is a good buy at full Scott catalog value. Sets with ragged perforations sell for less, depending on how unsightly the perforations are.