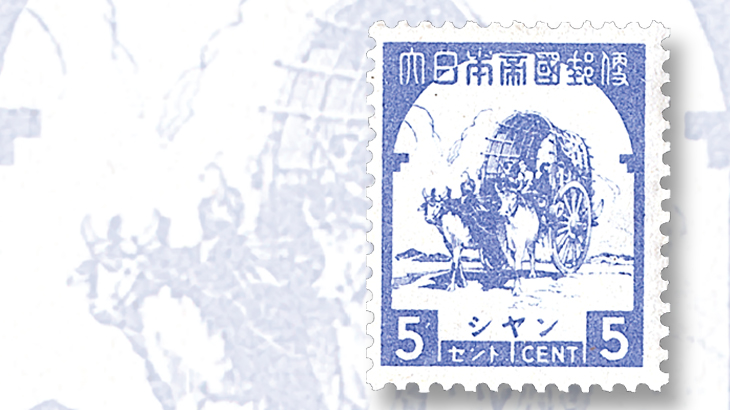 The 1943 set of seven Japanese occupation stamps for use in the Shan provinces of Burma (Scott 2N51-2N57) is in demand in mint never-hinged, unused hinged, and used condition.

Officially known as the Republic of Myanmar, Burma has been in the news of late as it attempts a difficult transition to civilian rule after more than 50 years of repressive military government.

Located in Southeast Asia, it borders Bangladesh, India, China, Laos, and Thailand and has extensive coastland along the Andaman Sea and the Bay of Bengal. An independent empire from the 11th century, it became part of the British Raj after a series of three wars in the 19th century.

Conquered and occupied by the Japanese in World War II, Burma gained its independence in 1948. Inhabited by seven major and several minor ethnic groups, the country has been in a constant state of strife since gaining independence.

On Oct 1, 1943, Japan issued a set of seven occupation stamps for use only in the Shan provinces of Burma (Scott 2N51-2N57). This set is in demand from Burma specialists, British Empire collectors and collectors of Japan in both unused hinged condition and used condition.

The 2016 Scott Standard Postage Stamp Catalogue values the set at $182.75 in unused hinged condition and $237.50 in used condition, with the values for used in italics. It also notes that canceled-to-order examples are valued at half the value for used stamps.

We think it is a good buy at around $100 in unused hinged condition. Sets in mint never-hinged condition bring about $50 more. The set is worth full catalog value in used condition, but unless you are expert enough to tell the difference between postal use and canceled-to-order, you should have them expertized.