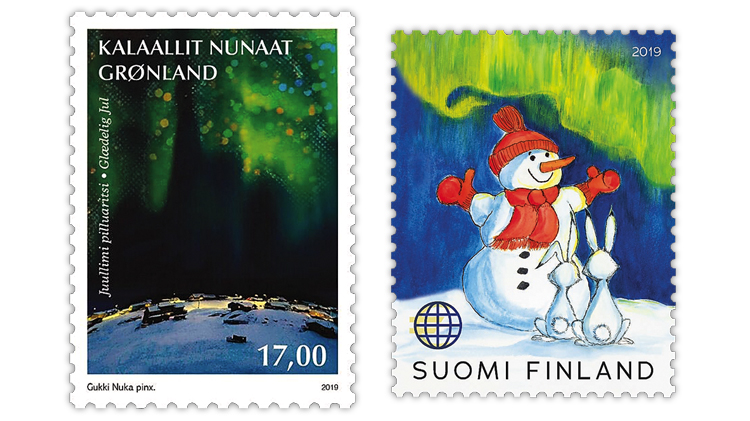 The northern lights provide an extra glow on these Christmas stamps from Greenland and Finland. 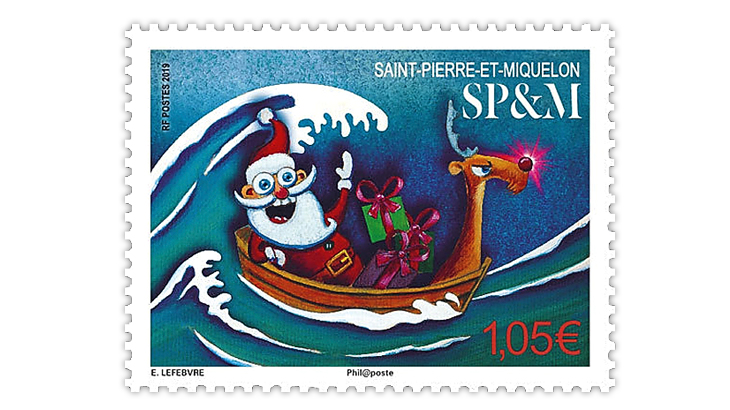 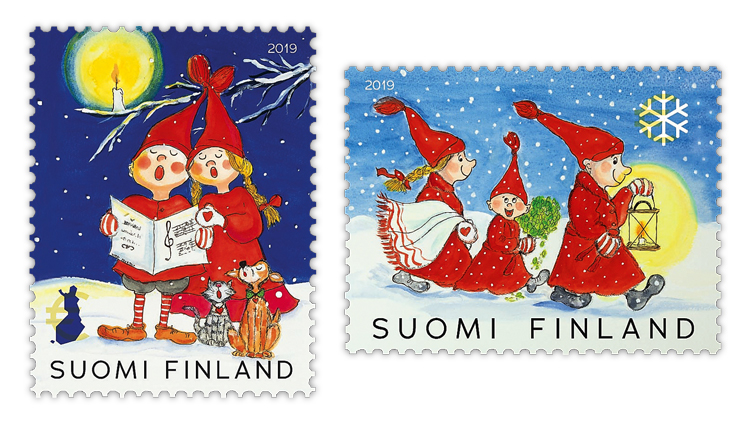 Two Finnish stamps feature elves caroling by candlelight and walking to the sauna by the light of a lantern. 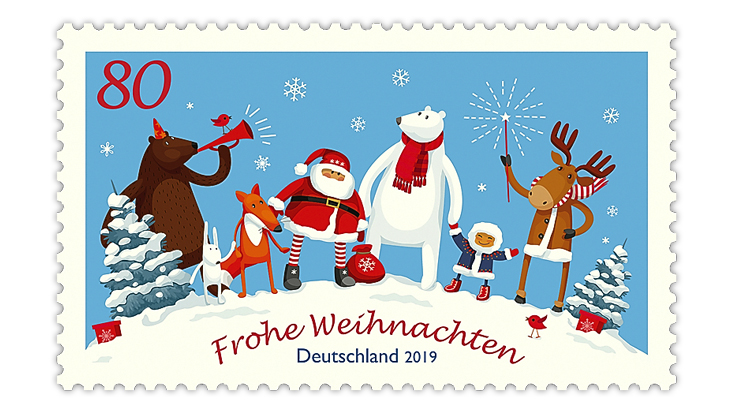 An elk holds a sparkler on a German Christmas stamp showing Santa Claus and some of his friends. 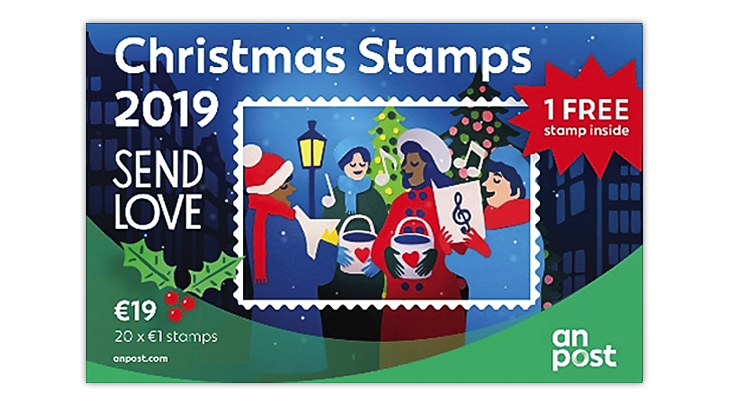 A €1 stamp from Ireland depicts carolers singing under a street lamp. One stamp is free when customers buy the booklet of 20. 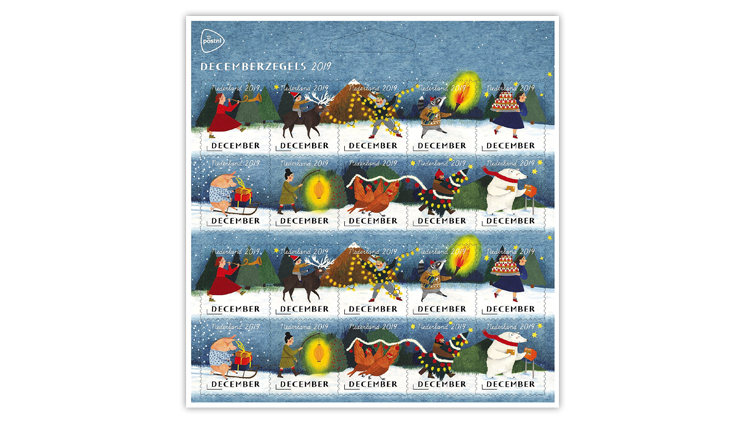 On the Netherlands’ pane of 20 December stamps, 10 characters (both human and animal) parade through the night carrying Christmas tree lights, a torch and a lantern. 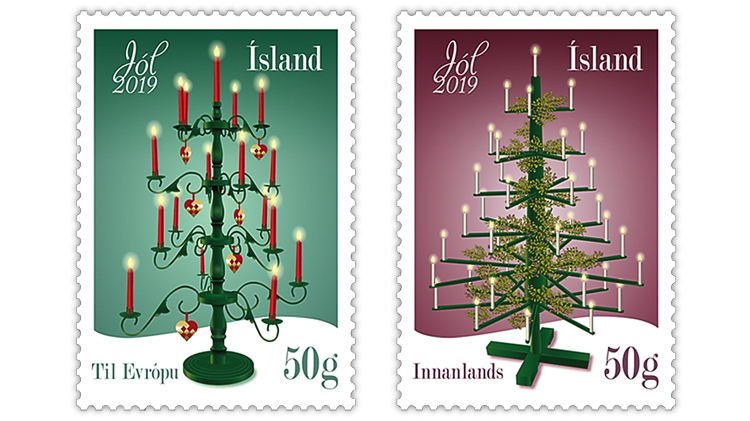 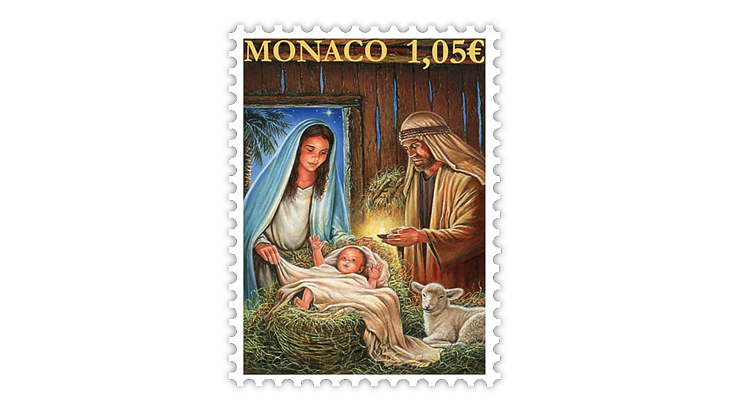 Candlelight is included in this depiction of the Nativity on Monaco’s Christmas stamp issued Nov. 4. 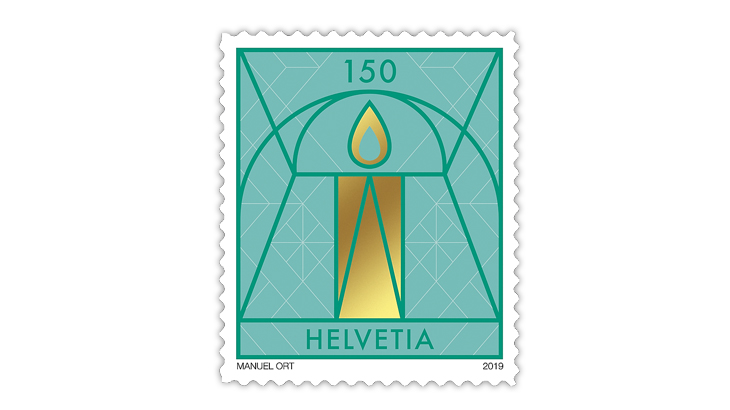 New Stamps of The World by Denise McCarty

The aurora borealis, also known as the northern lights, dances across the sky on two of this year’s Christmas stamps.

A 17-krone stamp issued Oct. 21 by Greenland shows the northern lights sparkling over houses in a snowy landscape. A 15kr stamp released at the same time depicts a red star in a window.

In the September issue of Greenland Post’s Greenland Collector, Nuka said of the inspiration behind his designs: “The magical feeling of my childhood Christmases was when we’d go on house to house visits for sweets and Christmas biscuits. The town, which was pretty much illuminated only by the northern lights and the Christmas stars in people’s windows, was a gigantic world for a child with a very creative imagination. I’d often imagine that my Danish grandparents (who lived in Denmark) were right on the other side of the horizon, where they could see the same northern lights that I was looking at.”

A snowman, rabbits and the northern lights are featured on the nondenominated international-rate Christmas stamp issued Nov. 6 by Finland.

According to Virpi Pekkala, who designed the stamp, the two rabbits are intentionally ignoring the natural light show.

She said of the scene illustrated on the stamp: “It is so cold that even the snowman has a knit cap, scarf and mittens. The bunnies are not admiring the Northern Lights but staring at the snowman’s carrot nose.”

In the designs of Finland’s two new domestic-rate Christmas stamps, artificial lights help to illuminate the night. Two elves, a dog and a cat carol in the candlelight on one stamp, while an elf family uses a lantern to light the path to the sauna on the other.

The designs of the Christmas stamps from St. Pierre and Miquelon, Germany, Ireland, and the Netherlands illustrate different methods that people and animal characters use to add some light to a winter’s night.

For example, Rudolph’s red nose helps Santa to navigate his boat on the €1.05 stamp issued Nov. 7 by St. Pierre and Miquelon.

On a German Christmas stamp, a cartoon elk holds a sparkler in one of its hooves. The elk is also wearing a coat and a red and white striped scarf on this €0.80 stamp issued Nov. 2.

In the new-issue announcement, Deutsche Post calls the stamp “Christmas with Friends” and says of the design, “Santa Claus, the polar bear and the Eskimo child celebrate Christmas together with the animals of the forest.”

On Oct. 10, Germany issued a Christmas semipostal stamp, €0.80+ €0.40, showing a Nativity scene from a stained glass window on the west facade of Notre Dame Cathedral in Chartres, France.

Ireland’s An Post issued six Christmas stamps Oct. 17. On one of the four €1 denominations, carolers are singing under a street lamp to raise money for charity. Decorated trees are also pictured in this design.

The stamp is sold in booklets of 20 for €19, meaning that one stamp is free. An Post also will make a donation to a homeless charity fund for every booklet sold.

A mix of people and animals parade across a wintry landscape on the 10 stamps issued by the Netherlands Nov. 14 in a pane of 20. The stamps are known as December stamps and are valid for a reduced rate from Nov. 4 through Jan. 3.

In addition to starlight, the illustrations by Lieke van der Vorst include a strand of Christmas lights that extends across three of the se-tenant (side-by-side) stamps, a raccoon holding a burning torch, a woman with a paper lantern, and a man carrying a tree decorated with round, red ornaments and yellow lights.

Iceland, Monaco and Switzerland feature candlelight on their Christmas stamps.

On the two stamps issued Oct. 31 by Iceland, homemade trees are adorned with candles. A tree from the middle of the 20th century is pictured on the stamp paying the rate for mail to Europe The tree on the domestic- rate stamp dates back to 1873, according to information from Iceland Post.

On the four stamps issued Nov. 14 by Switzerland, traditional Christmas motifs are shown in a style reminiscent of the leaded stained glass windows of Gothic cathedrals.

A single candle is pictured on the 1.50-franc stamp and a star on the 2fr. The other designs depict a wrapped present (85 centimes) and a snowflake (1fr).