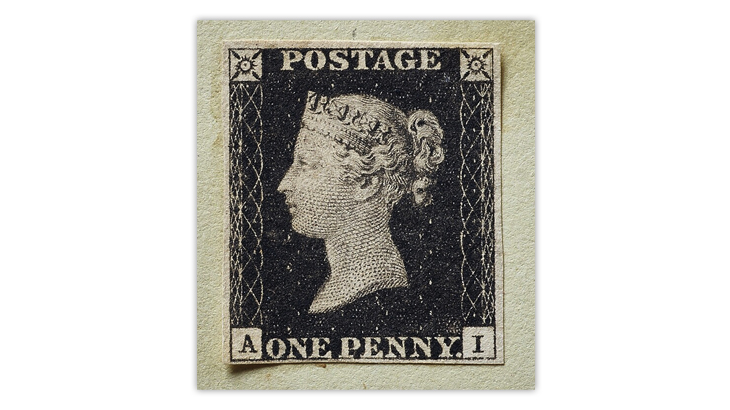 On Dec. 7 in London, Sotheby’s will auction the earliest verifiably dated example of Great Britain’s iconic 1840 Penny Black. The stamp is affixed to a document dated April 10, 1840, that once resided in an album assembled by Robert Wallace, a member of P

The earliest verifiably dated example of Great Britain’s 1840 Penny Black, the world’s first adhesive postage stamp, is set to be auctioned Dec. 7 as part of Sotheby’s Treasures sale in London.

“Rediscovered nearly three decades ago but not fully recognised until much more recently, the stamp’s identification began when British businessman and philatelist Alan Holyoake came into the possession of The Wallace Document, to which the stamp is attached, almost ten years ago,” Sotheby’s announced in an Oct. 26 press release.

The Penny Black affixed to the famed document, which is dated April 10, 1840, is shown here.

According to Sotheby’s, the Wallace document was once part of Robert Wallace’s personal album, which was dispersed years ago. Wallace (1773-1855) was a Scottish politician and a member of Parliament who vigorously advocated for postal reform.

Wallace wrote the following notes on the document named for him:

“Universal Penny Postage Fly or Loose Stamp, presented to me Mr. Wallace as above.”

“These come into public use on the 6th of May.”

The “Penny Postage Stamp Cover” that Wallace refers to shows the design of the Mulready envelope “that had been commissioned by the government as an alternative means to prepay postage,” Sotheby’s said.

At the time, Mulready envelopes were viewed as the primary method for prepaying postage.

According to Sotheby’s, “the Penny Black was seen as secondary to the stationery — as simply a means of paying excess postage on the Mulready envelopes and wrappers.”

The first Mulready envelopes went on sale May 1, 1840, five days before the May 6 first day of issue for the Penny Black. Unfortunately the Mulreadys were not well received by the public and were quickly eclipsed by the now-famous 1d black stamp picturing a left-facing profile of a young Queen Victoria.

Sotheby’s describes the Penny Black on the Wallace document as having “a pristine impression, unused, and from plate 1a (the very first printed sheet) and lettered A-I” in the bottom corners of the stamp.

Sotheby’s is offering the Wallace document with an estimate of £4 million to £6 million, approximately $5.5 million to $8.3 million in late October.