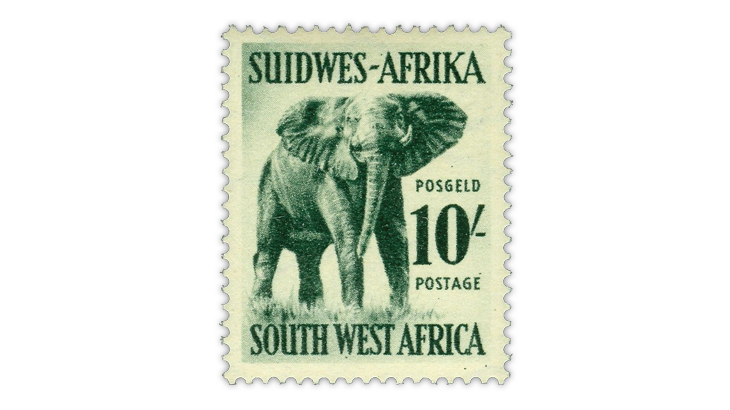 Located on the southwest coast of Africa with 976 miles of seacoast along the Atlantic Ocean, the present-day country of Namibia was claimed by the German Empire as a colony in 1884.

During World War I, German South West Africa was invaded and occupied by Allied troops from South Africa. After the war, the colony was awarded as a League of Nations mandate to the Union of South Africa.

The mandate was revoked in 1966, but South Africa refused to surrender the territory. In 1978 South Africa began allowing limited self-government. The country became independent as the Republic of Namibia in 1990, although South Africa continued to occupy some of its territory until final withdrawal in 1994.

The stamps of South West Africa were designed and produced by South Africa, and they share design and production values and bilingual inscriptions in English and Afrikaans with South African stamps.

This set is popular with topical collectors, particularly the three high denominations that depict a lioness, a Cape oryx and an elephant, respectively.

The Scott Standard Postage Stamp Catalogue values the set in mint, never-hinged condition at $60.90 with most of the value coming from the 10-shilling green Elephant stamp (Scott 260) at $35.

If you can get the top three denominations of this set (Scott 258-260) at or below Scott catalog value, you can easily fill in the rest of the set for considerably less than catalog value.