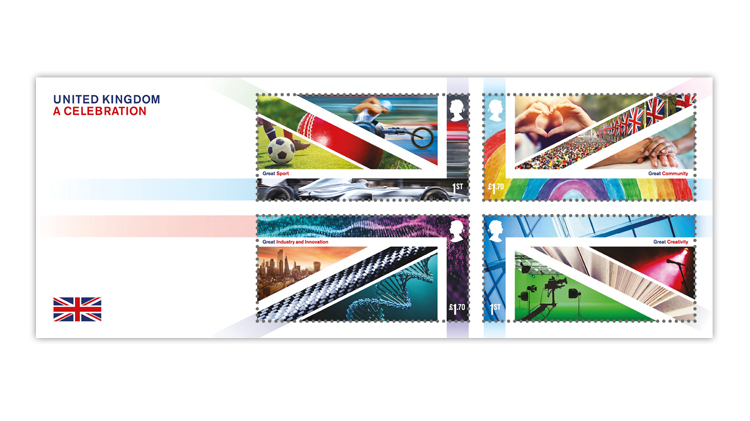 A new souvenir sheet from Royal Mail celebrates the strengths and accomplishments of the United Kingdom.

Royal Mail unveiled the design of this sheet Jan. 15. The issue date is Jan. 26.

Philip Parker of Royal Mail added that the stamps are “a celebration of these islands and the people who call them home.”

The four stamps are shown against an illustration described by Royal Mail as a “colourful interpretation of the Union Flag.” The United Kingdom’s national flag, also known as the Union Jack, is depicted in its traditional white, red and blue colors in the lower left corner in the selvage.

Included in the upper left is “United Kingdom” in blue and “A Celebration” in red.

Each stamp also bears an inscription with one word in blue and a word or phrase in red. For example, on the nondenominated first-class stamp in the upper left, “Great” is in blue and “Sport” is in red. The stamp design features parts of four photographs of a soccer ball, a cricket ball, a wheelchair athlete, and a race car in motion.

In the press release announcing the souvenir sheet, Royal Mail said of this stamp: “Britain is a proud and passionate sporting nation. It is the birthplace of football [known as soccer in the United States] and cricket, and, in 1948, hosted the first organised competition for disabled athletes. The UK has also produced 10 Formula 1 champions — more than any other country.”

The £1.70 stamp in the upper right, inscribed “Great Community,” showcases the United Kingdom’s “long-held held sense of community spirit,” according to Royal Mail.

The photo in the center of the design was taken at the 2011 Virgin London Marathon. Also included in the design are two photos of hands: one with hands making a heart shape and the other of the hands of a nurse who is reassuring a patient. Completing the design is a rainbow illustration by Daisy James.

The second £1.70 stamp (lower left) features “Great Industry and Innovation,” according to the inscription. The design joins photos of the London skyline and carbon fiber material with three-dimensional illustrations of DNA molecules and the rendering of binary code.

In the press release, Royal Mail said that “DNA fingerprinting was perfected in the UK and Britain played a central role in the sequencing of the first draft of the human genome,” adding that the nation is a “leading light in the digital technology sector” and “also a world leading centre for financial services.”

The creative industries of music, film and television production, literature and architecture are represented on the first-class stamp inscribed “Great Creativity.”

The photos in the stamp’s design picture a television studio, book panes, a microphone in a spotlight, and the glass facade of an office building.

The first-class rate currently is 85 pence. The £1.70 stamps meet the rates for all international mail weighing up to 20 grams and for mail to European countries weighing up to 100 grams.

The souvenir sheet was designed by Hat-Trick Design and printed by International Security Printers using lithography.

In addition to the stamps, Royal Mail is offering postmarks, a first-day cover, a presentation pack, and five postcards reproducing the designs of the stamps and the souvenir sheet.