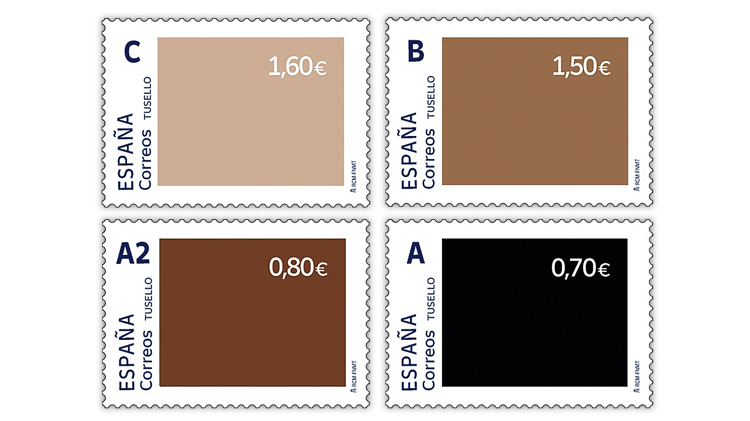 Spain’s Correos issued a set of four personalized stamps May 25 to bring attention to racial discrimination. In announcing the stamps, Correos said that “we launched a collection of stamps that reflects an unjust and painful reality to which millions of p

Spain’s philatelic attempt to draw attention to racial inequality has backfired, drawing widespread criticism from a variety of news media.

This apparently also led to Spain’s Correos withdrawing the stamps from sale only a few days after they were issued.

The premise behind the stamps is summed up this headline from a story on the website of The New York Times: “Spain Issued ‘Equality Stamps’ in Skin Tones. The Darker Ones Were Worth Less.”

Correos unveiled the stamps on its Facebook page May 24, one day before the issue date.

As Correos pointed out in its Facebook posts, May 25 was selected as the issue date to coincide with the first anniversary of the murder of George Floyd in Minneapolis. Derek Chauvin, who was a police officer at the time of Floyd’s death, was found guilty of second-degree unintentional murder, third-degree murder and second-degree manslaughter, on April 21.

The stamps’ release also coincided with European Diversity Month in May.

The four stamps, as they were shown on Correos’ website, are in four different shades that reflect “an unjust and painful reality to which millions of people face every day. The darker the color of the stamp, the less value it will have.”

Whether the denominations appear on the stamps or they are nondenominated with the letters, and one letter and numeral — A, A2, B and C — is not known. Linn’s has not seen actual examples of the stamps, but all publicity images include the denominations.

There are two possible reasons why no images of actual stamps could be found: They are personalized stamps not easily available to people outside of Spain and they were produced in extremely limited quantities.

The “Tusello” inscription on the left side of each stamp refers to Correos’ personalized stamp service.

Like many other postal administrations, Correos issues a variety of stamps with designs that cannot be customized as part of its personalized stamp program. For example, in late 2019, Correos released a pack of 10 Protest stamps “with 10 different designs with messages that portray the voices of a generation aware of climate change.”

According to the listing on Correos’ website (https://tienda.correos.es), the quantity produced of the 2019 Protest issue was 1,100 packs.

The listing for the “Equality Stamps” collection has been removed from the website, but when Linn’s visited that page on May 25 the quantity given was 600.

That listing also said (translated into English): “The collection aims to help raise awareness about diversity, inclusion and equal rights.

“At the Post Office, we do not remain on the sidelines in the face of racial discrimination, therefore, in the European Month of Diversity and coinciding with the first anniversary of the murder of George Floyd, we launched a collection of stamps that reflects an unjust and painful reality to which millions of people face every day. The darker the color of the stamp, the less value it will have.

“In this way, we turn each letter and each shipment into a reflection of the inequality that racism creates, and one more step towards its definitive disappearance.”

Correos spelled it out even more clearly in a May 25 press release saying that the stamps will have a different value “depending on the color of the skin they represent: the darker the stamp, the less value it will have, therefore, when making a shipment, it will be necessary to use more black stamps than white ones. In this way, each letter and each shipment will become a reflection of the inequality created by racism.”

The complaints about the stamps came quickly and with them calls to remove the stamps from sale.

A May 27 report by Barry Hatton and Alicia Leon for the Associated Press said that “Antumi Toasije, a historian who heads the government’s Council for the Elimination of Racial or Ethnic Discrimination, urged the postal service to stop selling the stamps.”

The report also mentions his tweet, which says in part (translated from Spanish), “A campaign that outrages those it claims to defend is always a mistake.”

CNN reported May 28 that the stamps had been withdrawn from sale.

This report by Al Goodman, Scottie Andrew and Nicole Chavez said: “Sales of the stamps ended Friday morning, a spokesman for Correos told CNN. He said the postal service ‘will not make comments’ about the criticism the campaign received.

“Asked if the end to the campaign was a reaction to that criticism, he told CNN, ‘It’s not like that.’

“ ‘Correos is an anti-racist company,” said the spokesman who noted that the postal service does not usually specify when a campaign will end.”

In a May 25 press release, Correos said that the stamps were a collaboration with SOS Racismo, and that the “initiative has had the participation of El Chojin, a Spanish rapper and composer who has given voice to the launch campaign for ‘Equality Stamps.’ ”