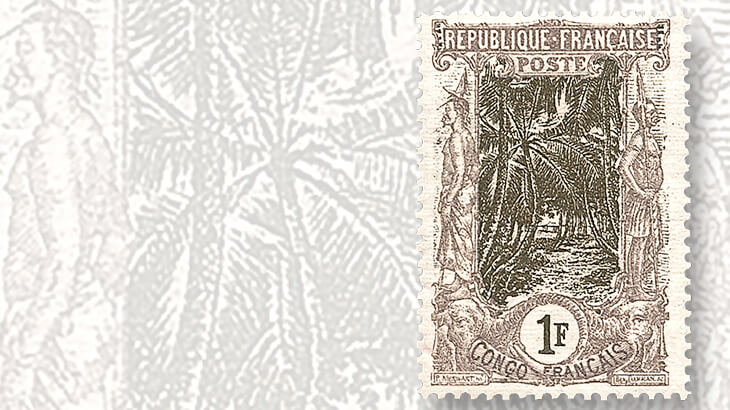 The French Congo high face-value stamps from the pictorial set of 1900-04 (Scott 47-49) are in demand and hard to find in unused hinged condition and in grades of very fine or better.

French Congo was a colonial territory in central Africa comprising most of what is today the Republic of Congo, Gabon, and the Central African Republic. It began as a protectorate in 1880 and was formally established as a colony in 1882.

Most of the administration of the colony was done by French concessionaires who exploited its ivory, timber, and rubber resources. The colony’s name was changed to Middle Congo in 1903 and to French Equatorial Africa in 1910. Its constituent nations gained independence from France in 1960.

French colonial issues are known for long sets of attractive bicolor pictorial stamps, and French Congo is no exception.

In 1900-04, a set of 15 stamps was issued (Scott 25-49). The subjects include a leopard, a Bakalois woman, and a coconut grove. The set is of interest to collectors of French colonies, classic stamps, and some topical collectors.

The 2017 Scott Classic Specialized Catalogue of Stamps and Covers 1840-1940 values the set at $222.75 in unused hinged condition. You won’t often find the whole set offered, especially with all the stamps in grades of very fine or better.

You can often find the centime face-value stamps at below catalog value. But the 1-franc, 2fr, and 5fr denominations (Scott 47-49) are harder to find, especially well centered.

The Scott Classic Specialized catalog values the 1fr stamp at $24, the 2fr stamp at $47.50, and the 5fr stamp at $87.50 in used hinged condition. These stamps are in demand and are a good buy in the grade of very fine at up to full Scott catalog value.