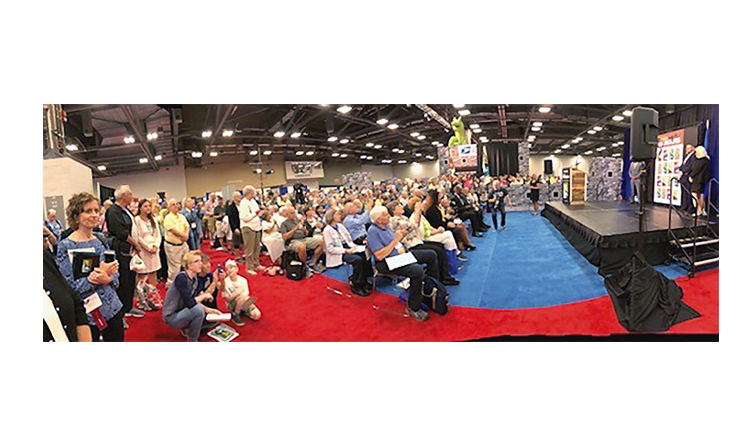 Panoramic photograph of the crowd at the APS Stampshow 2018 in Columbus, Ohio, gathered for the issuance of the United States Dragons forever stamps (Scott 5307-5310). Photo by Jay Bigalke.

The year 2021 is not even here yet, but in regards to in-person stamp shows, it looks like more of what 2020 brought the hobby: COVID-19-related cancellations.

So far a number of major World Series of Philately shows that are typically held in January and February have been canceled, including Florida’s Sarasota National Stamp Exhibition, Georgia’s Southeastern Stamp Expo and Arizona’s Aripex show.

The next WSP on the radar after that is Ohio’s March Party stamp show, which is scheduled for April, specifically April 9-11, instead of March. Linn’s has not heard any updates on that show, but it is still a little early to know what April next year will bring.

That said, our Events Calendar listing in each issue of Linn’s has included paid placements promoting a number of smaller shows in Connecticut, Florida, Missouri, Oklahoma, Oregon and other states that generally have bourses with from four to 15 in-state dealers.

But, even with that in mind, it still might be a while before the return of the full WSP show circuit.

Faced with that prospect, how are collectors and dealers adapting to what seems to be a marketplace driven by both the mail and the internet to conduct business? Perhaps a few of the replies to that question could be used in the Letters to Linn’s column.

During this time, I continue to work on the monumental task of organizing my various collections.

In a previous column, I asked about tips for online selling, and I am continuing to compile the wonderful comments received into a future editorial.