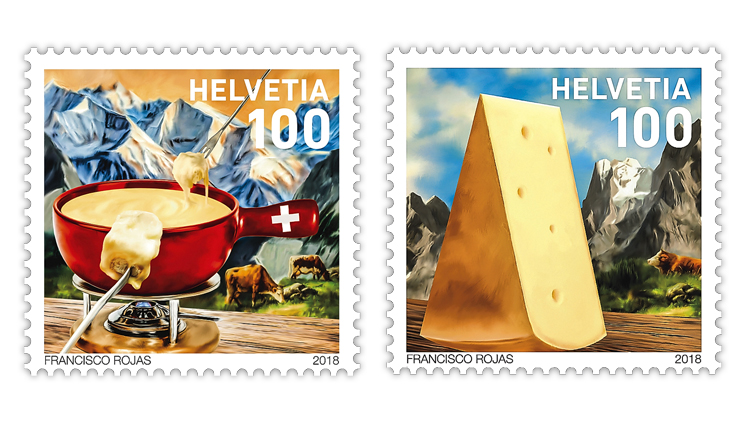 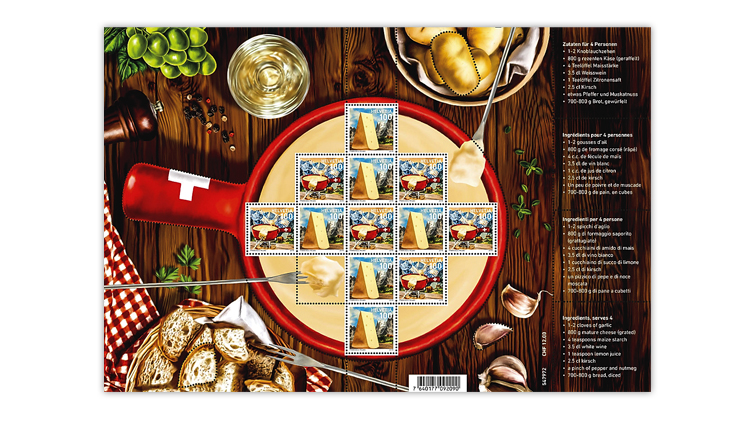 Switzerland’s two Fondue stamps are se-tenant (side-by-side) in an unusual pane of 12 stamps, which includes a large fondue pot surrounded by perforations and labels listing the ingredients for the melted cheese dish. 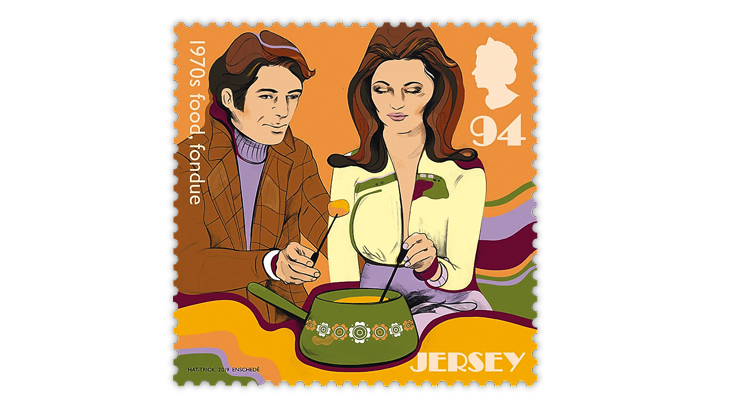 Fondue is remembered as a food craze of the 1970s on a stamp to be issued Jan. 18 by Jersey. 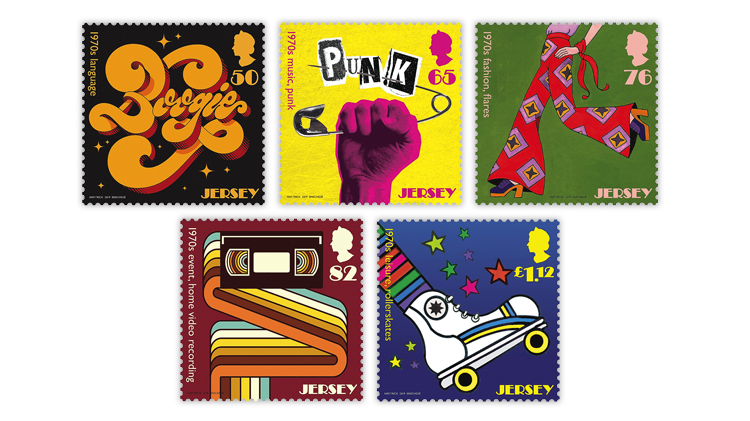 Popular culture trends of the 1970s are illustrated on an upcoming stamp set from Jersey. The stamps continue a series that began in 2016.
Previous
Next

The melted cheese dish fondue is featured on recent stamps from two countries.

Switzerland honors fondue as its national dish on two stamps issued Nov. 15, 2018, and Jersey commemorates it as a fad of the 1970s on a stamp released Jan. 18.

One stamp depicts a fondue pot resembling the Swiss national flag; the pot is red with a white cross on the handle.

The other stamp shows a wedge of cheese.

Pictured in the background of each design is an alpine scene with mountains and cows.

The two stamps are se-tenant (side-by-side) in a pane of 12 that continues the fondue and alpine themes.

A fondue pot in the center of the pane is surrounded by perforations. Also, perforated labels on the right side of the pane list the ingredients for fondue for four people in English and three other languages.

In Swiss Post’s bulletin for collectors, Focus on Stamps, Jurg Freudiger describes the stamp pane: “The scene is reminiscent of the terrace of an Alpine hut: a wooden table, perfect mountain surroundings in the background, the dishes, the ingredients — everything rustically displayed in warm colours. Viewers feel momentarily transported to a cosy atmosphere and are even convinced they can smell the homely scents.”

How many centuries ago people first started melting cheese and dipping stale bread in it is not known, but recipes for the dish first appeared in cookbooks in the late 17th century.

In 1930, the Swiss Cheese Union declared fondue the national dish. It was served at the Swiss alpine restaurant at the 1964 New York World’s Fair, and by the 1970s, it had developed into a full-blown food fad.

This fondue craze is remembered on a 94-penny stamp from Jersey showing a man and woman with an avocado green fondue pot.

A souvenir sheet with a single £2 stamp shows an artistic representation of a Jersey shopping district in the 1970s.

Joh. Enschede of the Netherlands printed the stamps and souvenir sheet by offset lithography.”