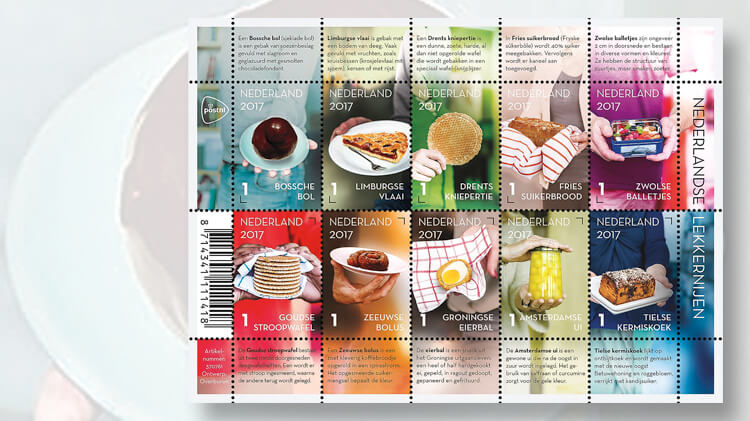 The Netherlands’ Dutch Treats pane of 10 features delicacies from different towns and regions.

The Netherlands highlights regional delicacies on a pane of 10 stamps issued June 19. The Netherlands’ PostNL calls this issue “Dutch Treats.”

The treats pictured were selected in consultation with the Dutch Center for Intangible Cultural Heritage in Utrecht. The labels attached to the stamps describe the items.

All but two of these Dutch treats are sweet. The two nonsweet items are pictured in the bottom row, with Groningse eierbal (Scotch egg in English) displayed on the middle stamp, and a jar of Amsterdamse ui (pickled onions) featured on the next stamp.

The pane includes two pastries: the chocolate-covered, cream-filled Bossche bol in the upper left; and the spiral-shaped cinnamon bun, Zeeuwse bolus, second from the left in the bottom row. Also, two thin waffle treats are pictured. Drents kniepertie is shown on the stamp in the center of the top row, and a stack of the syrup-filled Goudse stroopwafel is depicted in the lower left.

Remaining in the upper row are a slice of the fruit tart known as Limburgse vlaai, second from the left; Fries suikerbrood (Fresian sweet bread), second from the righ; and a tin of candy called Zwolse balletjes on the far right. Shown below the candy is the carnival cake of Tiel (Tielse kermiskoek).

The stamps are nondenominated. The “1” in the lower left indicates that they pay the basic domestic rate for letters weighing up to 20 grams.

Joost Overbeek, Ayla Maagdenberg, and Maarten Geurink of Studio Overburen in Amsterdam designed the stamps. All three also are featured as models holding one of the Dutch treats in the photographs reproduced on the stamps. Overbeek said that the models on the other stamps were people who just happened to visit the studio during the photo shoot.

In the PostNL press release, Overbeek compared the design of the Dutch Treat pane, especially the colors used, with his favorite stamps from childhood: “When I collected stamps as a boy, I preferred Polish and Hungarian stamps. That was mainly because they were so wonderfully colourful. These have a similar feel to them.”

Joh. Enschede of the Netherlands printed the stamps by offset in a quantity of 130,000 panes.