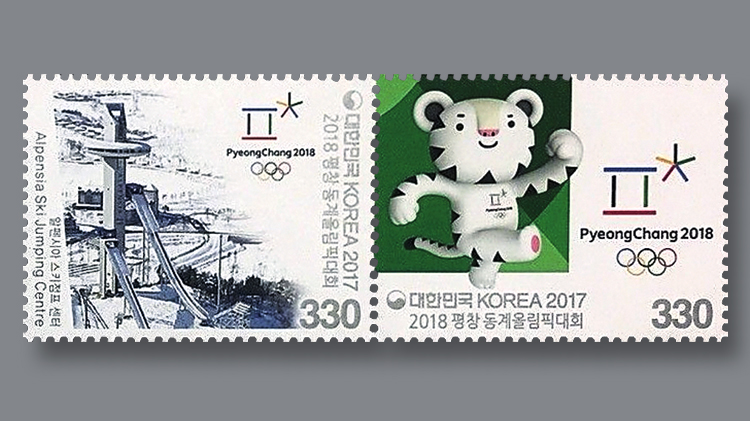 Sooharang, the white tiger mascot of the Pyeongchang Olympics, is featured on one stamp in this se-tenant pair from South Korea. The other shows the Alpensia Ski Jumping Center.

Recent stamps from South Korea depict the mascots of the Pyeongchang 2018 Olympic and Paralympic Winter Games.

South Korea will host the Winter Olympics from Feb. 9-25, and the Paralympics from March 9-18.

Soohorang, the white tiger mascot of the Pyeongchang Olympics, is shown participating in different winter sports on stamps issued Nov. 1, 2017, in two panes of 10.

The Olympic website reports that the white tiger is considered Korea’s guardian animal.

The website also explains the mascot’s name: “ ‘Sooho,’ meaning protection in Korean, symbolises the protection offered to the athletes, spectators and other participants of the 2018 Games. ‘Rang’ comes from the middle letter of ‘Ho-rang-i”,’ the Korean word for ‘tiger,’ and is also the last letter of ‘Jeong-seon A-ri-rang,’ a cherished traditional folk song of Gangwon Province, where the Games will be held.”

Not all of the stamps depict Soohorang. One pane includes a stamp showing the Alpensia Ski Jumping Center and another picturing the Pyeongchang Olympics emblem. The selvage of this pane depicts the Gangneung Ice Arena, the site of figure skating and short-track speed skating events.

The other pane includes only one non-Soohorang stamp; it depicts the Pyeongchang Olympic Stadium. Pictured in the selvage of this pane is the Gangneung Oval, where the speed skating competitions will be held.

Bandabi, the Asiatic black bear that serves as the mascot for the Paralympics, is featured on 10 stamps issued Jan. 18.

Like the Soohorang stamps, they are denominated 330w, but instead of being rectangular, they are hexagonal.

In addition to depicting the mascot playing different sports, the stamps show the emblem and flame of the Paralympics.

The stamps are se-tenant in a single pane with a winter scene of frosty trees in the background.

The website said of the mascot: “The Asiatic black bear or ‘ban-dal-ga-seum-gom’ (the bear with a half-moon mark on the chest) symbolises strong willpower and courage in the Korean folklore … ‘Banda’ is derived from ‘ban-dal,’ the Korean word for the half-moon. ‘Bi’ stands for celebration of the Games.”

On the Feb. 9 opening day of the Games, Korea Post will release a se-tenant pair of 330w commemoratives. One shows the gold, silver and bronze medals, and the other depicts the Olympic torch and fireworks above the stadium.