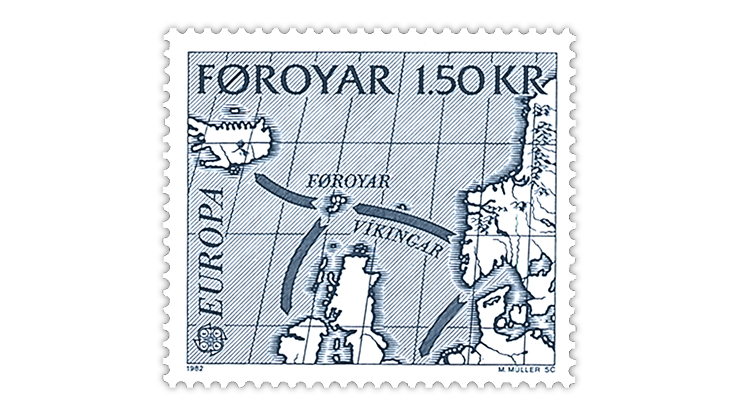 A 1982 stamp shows the location of Faroe Island in the North Atlantic Ocean. The stamp maps the routes taken by the Vikings.

The May 6 issue of Linn’s Stamp News just landed on the presses and goes in the mail to subscribers Monday, April 22. And if you subscribe to Linn’s digital edition, you’re at the head of the line with early access Saturday, April 20. Here are three stories you'll want to check out.

Stamps reveal much about the remote Faroe Islands

In the previous Stamp Excursions column (Linn’s, April 15, page 36) we explored the Isle of Man and some of the birds represented on its stamps, including puffins.

Some 500 miles mostly north of the Isle of Man are the remote Faroe Islands, which have a fully active puffin population and other attractions. See the full story by Janet Klug.

The New Hampshire Postal History Society is one of many groups that focus on studying and collecting philatelic material primarily associated with one of the 50 states. Michael Baadke shares more information in this week’s Linn’s.

Columnist by William F. Sharpe searches for podcasts available to stamp collectors and shares his findings this week.