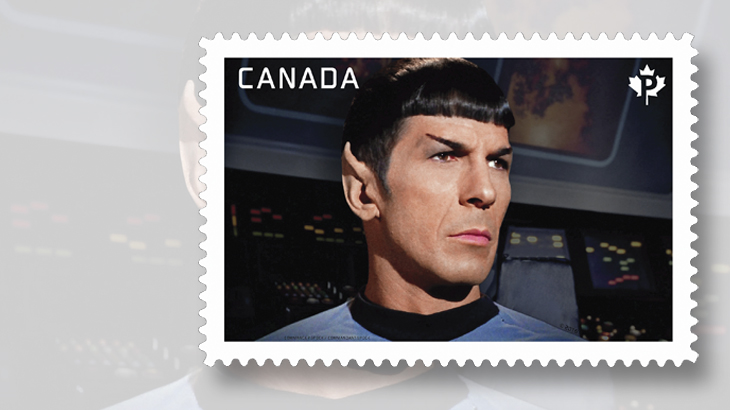 Actor Leonard Nimoy is featured in his role as Spock from the Star Trek television series, on a permanent-rate stamp revealed by Canada Post.

The new stamp shows actor Leonard Nimoy in character as first officer Spock, the role he originated on the original Star Trek television series in 1966.

Nimoy continued in the role of Spock throughout the three-year run of the landmark science fiction series and in several feature films, beginning with Star Trek: The Motion Picture in 1979, and including Star Trek in 2009, and Star Trek Into Darkness in 2013, where he and actor Zachary Quinto each portrayed a version of Spock from a different timeline.

The Spock stamp from Canada Post shows the character with control panels from the Enterprise bridge in the background. The stamp is a horizontal commemorative shape similar to the Capt. Kirk stamp shown previously. The Starship Enterprise stamp appears to be in a smaller coil format.

All three stamps carry permanent-rate denominations for first-class letters, currently 85¢ for up to 30 grams (roughly 1 ounce).

The Spock stamp was revealed by Canada Post April 8 at the Trek Station tourist center in the town of Vulcan, Alberta. Among those participating in the unveiling event were Vulcan Mayor Tom Grant and Tourism Administrator Devan Daniels.