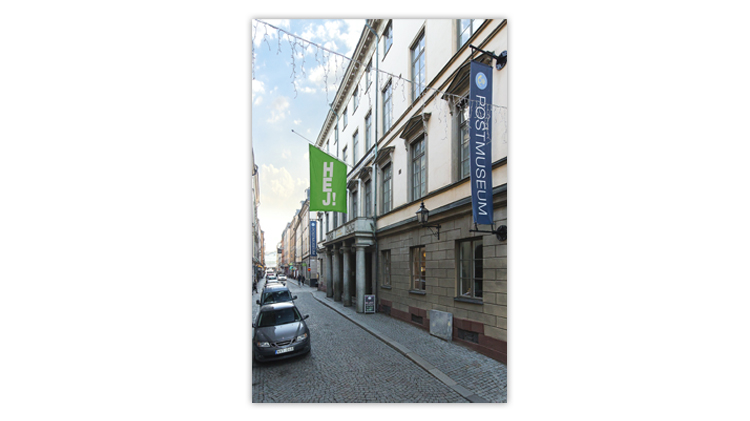 Sweden’s Postmuseum is located in Old Town, Stockholm, near where the Stockholmia stamp show is taking place. Photo courtesy of Postmuseum.

While visiting the international philatelic show Stockholmia, you have an opportunity to feast on a smorgasbord of Swedish philately.

Stockholmia will take place from May 29 to June 2 at the Waterfront Congress Centre, Nils Ericsons Plan 4, in Stockholm, Sweden. The Royal Philatelic Society London, celebrating its 150th anniversary this year, is being honored at the international exhibition.

Not far away in Stockholm’s Old Town is Postmuseum, where you can learn all about Swedish philately and the country’s postal history. By walking or taking the bus, you can reach the Postmuseum in less than 10 minutes from the Stockholmia show, according to Google Maps.

The museum structure itself is part of postal history. Postmuseum is housed in the oldest building in the Swedish postal organization. Dating back to the 17th century, it was purchased by Posten, Sweden’s postal service, in 1720. It housed Stockholm’s only post office until 1869. The museum opened in 1906 and is currently owned by PostNord, the combined postal administration of Sweden and Denmark.

Its first collections consisted of horse carriages, sleighs, an ice boat, letter boxes and uniforms. It now has nearly 18,000 such objects.

The philatelic collections consist of almost 4 million stamps, as well as originals and printing proofs for Swedish stamps, and also include 90,000 postal items such as envelopes and letters.

During Stockholmia, “Rarely Seen Rarities,” a temporary exhibit with philatelic objects from the museum’s collections, will be on display at the museum.

Swedish items found in this exhibit include the earliest known letter from Stockholm to London, sent in 1591; a 1686 letter with a “B-cancellation,” the first Swedish cancellation; and imperforate examples of the 6-skilling banco and 8sk stamps canceled 1856 and 1858. These rare errors missed being perforated because too many sheets were placed into the perforating machine.

Also found in the exhibit are two full sheets of the 55-ore and 80-ore Gustav V in Medallion stamps (Scott 90, 92). These stamps were issued in 1918 and distributed to the post offices, but shortly afterward were recalled because of increases in postal rates. These full sheets are the only ones remaining.

The “Treasure Chamber” is a can’t-miss, high-level exhibit that traces the development of Swedish stamps from 1855 to 1936 and includes rarities, such as covers franked with Sweden’s earliest skilling banco stamps, which show Sweden’s coat of arms, and a unique stamp sheet with a 4sk.

The collection also includes the only known letter franked with six 6sk stamps. Mailed from Stockholm to London in 1858, it arrived after five days. The museum says that the postage on this letter was the equivalent of the wages paid for one day’s hard industrial labor.

The museum describes its greatest treasure as the two 1847 Post Office Mauritius stamps, the world’s first colonial stamps. These are among the world’s rarest stamps.

“Your Post” presents a history of Sweden’s postal system since the 17th century. As part of visiting the past, you can try on old-style postal uniforms and have your picture taken. Postal transportation on display ranges from a 1920s postal wagon to an electric car.

“Hello!” is a hands-on area described as a “playful exhibition on communication,” where you can fold envelopes to make your own picture postcards, do mirror writing, create secret codes and learn more about the process of making a stamp today.

“The Little Post Office” is a youth area where young visitors can make their own postcards and sort mail, load it into a van and deliver mail to residents of winding alleyways.

A temporary exhibit, inspired by a visit to Canada’s national postal museum, features mail and stamp-inspired art from two groups: Gerlesborgsskolan, a two-year foundation art school, and Creative Embroidery Stockholm. Also, you will find objects from “Simultaneous Souvenirs,” a mail-art project that has been ongoing for three years.

The museum also has an archive with 100,000 photographs, as well as art, picture postcards and posters. The library, which opened in 1946, houses 60,000 books and journals.

Reviewers on travel websites offer positive comments to the museum and especially note that it is a good museum for families, with plenty of hands-on activities for children.

Location: 6 Lilla Nygatan, in Gamla stan, the Old Town of Stockholm, near the underground station

Special events: Temporary exhibit “Rarely Seen Rarities.” Also, a short introduction to the permanent exhibition, the “Treasure Chamber,” will be offered at 1 p.m. May 29 through June 1.