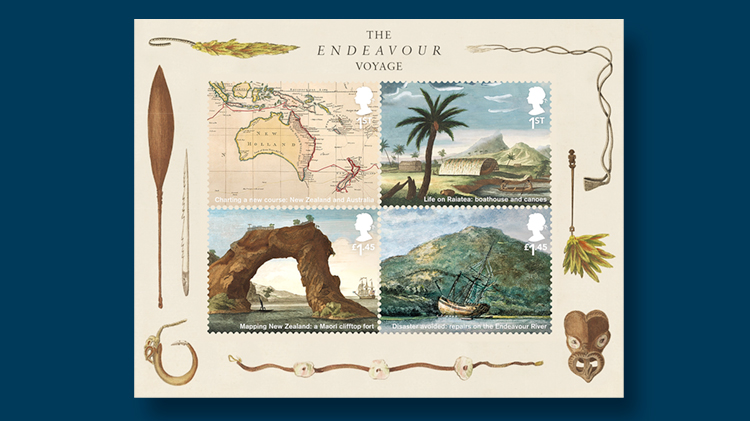 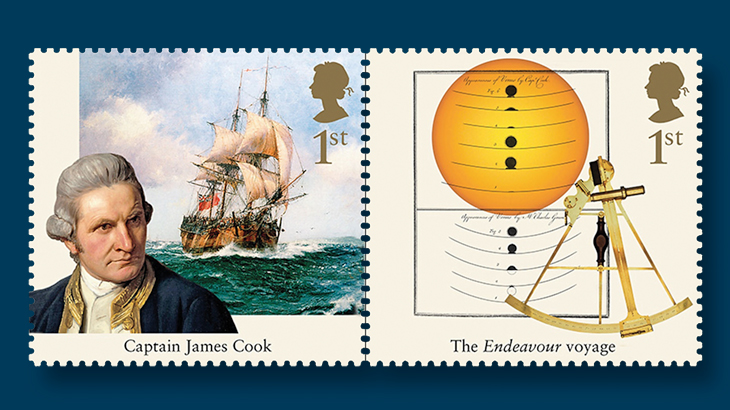 The se-tenant pair of two nondenominated first-class stamps in Great Britain’s Aug. 16 issue honoring the 250th anniversary of Capt. James Cook’s Endeavour voyage of 1768-71 show paintings of Cook and the ship, and a photograph of a sextant and a 1769 dra 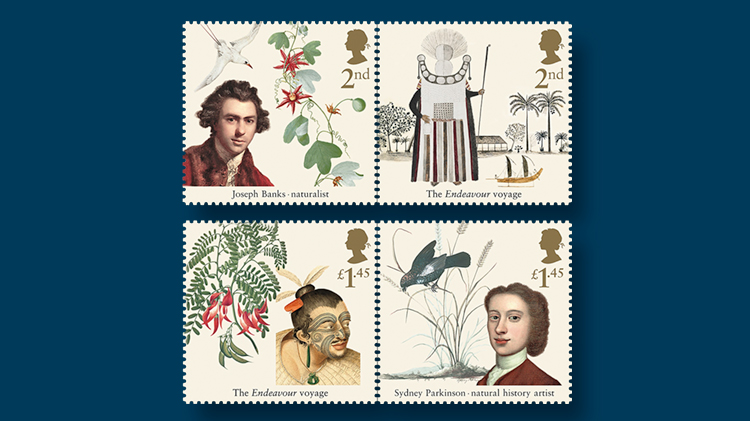 Botanist Joseph Banks and natural history artist Sydney Parkinson are honored on nondenominated second-class and £1.45 stamps in Great Britain’s new Endeavour set. Illustrations by Parkinson and Tupaia (a Polynesian priest who joined the voyage as a navig
Previous
Next

Six of the stamps are in three se-tenant (side-by-side) pairs, and four are in a souvenir sheet.

Under the command of Cook (then a lieutenant), HMS Endeavour departed from Deptford, England, on July 30, 1768 — the start of a three-year journey. Endeavour returned July 13, 1771.

Key achievements included contact with eastern Australia (a first for Europe), a detailed mapping of New Zealand and an accurate observation of the transit of Venus.

In addition to the crew, on board were a group of scientists, botanists and artist led by botanist Joseph Banks.

“Banks’s party brought home tens of thousands of specimens, many new to Europe,” Royal Mail explained on the informational card placed inside its first-day covers for the issue. “The Pacific’s exotic plants, fauna, fish and customs grabbed public attention in Britain as much as Cook’s extraordinarily detailed charts.”

The stamp designs show a “selection of the original drawings and paintings of the indigenous peoples, landscapes of the Pacific and flora and fauna,” according to Royal Mail. Also pictured are Cook, Banks and two other men from the Endeavour’s voyage.

One of the nondenominated first-class stamps depicts a portrait of Cook by Nathaniel Dance in the foreground, and Robin Brooks’ marine painting Triumph of the Navigators in the background.

The other first-class stamp shows drawings of the observations of the transit of Venus by Charles Green and Cook (1769) and a photograph of a sextant.

The first stamp in the nondenominated second-class pair features a portrait of Banks by Joshua Reynolds and two illustrations by Sydney Parkinson, a botanical draftsman hired by Banks to sketch the plants found on the voyage.

Shown in the upper left of the design is Parkinson’s drawing of a red-tailed tropicbird (Phaethon rubricauda). Pictured on the right is a red passion flower (Passiflora aurantia) outline by Parkinson (finished by Fred Polydore Nodder).

The second stamp in this pair shows chief mourner of Tahiti and a canoe scene, both drawn by Tupaia, a Tahitian high priest and navigator who accompanied the travelers on their way back to Britain. He died on the ship, but his knowledge was crucial to the accomplishments of the crew.

The two £1.45 stamps feature more artwork by Parkinson: the flowering plant scarlet clianthus (Clianthus puniceus) and a portrait of a Maori chief with full facial moko (the skin art form of the Maori) on one; and a blue-black grassquit and a self-portrait on the second. Maori are the indigenous people of New Zealand.

Howard Brown designed the stamps, and International Security Printers printed them by lithography in sheets of 60 (sold in panes of 30 at most postal outlets). The stamps are 37 millimeters by 35mm each, perforated gauge 14 by 14.5.

The souvenir sheet includes two nondenominated first-class stamps and two £1.45 stamps with hand-colored engravings from A Journal of a Voyage to the South Seas, 1794, in the background.

The first-class stamp in the upper left is inscribed “Charting a new course: New Zealand and Australia” and shows a chart by Lt. Henry Roberts exhibiting Cook’s discoveries. Roberts served with Cook on his second and third voyages.

The second stamp depicts a scene titled “Life on Raiatea: boathouse and canoes” from an engraving based on a drawing by Parkinson.

In the bottom left of the souvenir sheet, the first £1.45 shows another illustration by Parkinson. The inscription reads “Mapping New Zealand: a Maori clifftop fort.”

The inscription on the final stamp explains what is pictured, “Disaster Avoided: repairs on the Endeavor River.”

The souvenir sheet measures 115mm by 89mm, and its stamps are 41mm by 30mm and perforated gauge 14.5 by 14. Webb & Webb Design Ltd. designed the souvenir sheet, and International Security Printers printed it by lithography.

Additional products for the set include FDCs, a presentation pack that explores the Endeavour voyage in more detail, and 11 postcards that reproduce the designs of each of the 10 stamps and the souvenir sheet.

Cook and his voyages of discovery have been honored on other stamps of Great Britain, as well as on stamps from numerous countries around the world.