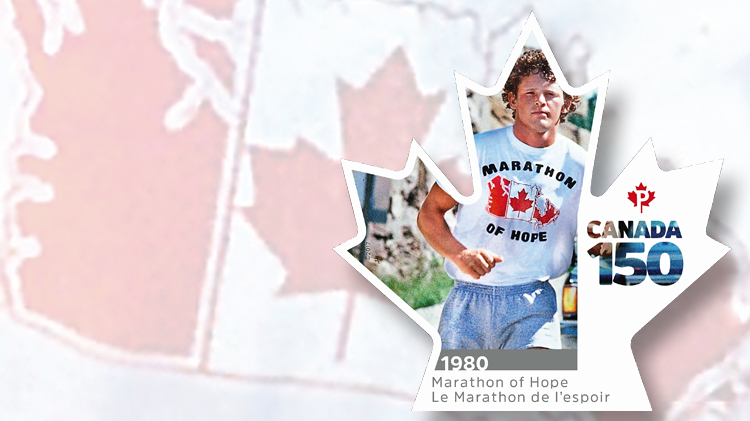 The sixth stamp announced in the Canada 150 series honors 22-year-old cancer survivor and amputee Terry Fox on his cross-Canada Marathon of Hope. It was unveiled May 25 for Fox’s sister Judith in St. John’s, Newfoundland, where Terry began his epic odyssey in 1980.

Terry Fox, a 22-year-old Canadian cancer victim whose indomitable spirit and resolution won the admiration and support of countrymen from coast to coast, will be honored by the sixth stamp in the Canada 150 series of 10 stamps.

Terry’s younger sister, Judith Fox, unveiled the maple-leaf-shaped stamp May 25 at a ceremony at City Hall in St. John’s, the capital of Newfoundland. It’s not far from where Terry took the first step in his epic Marathon of Hope on April 12, 1980, with his artificial leg in the Atlantic Ocean.

The Canada 150 stamps commemorate people, places and events that made a difference in that nation since 1967, Canada’s centennial year. The stamps will be issued June 1.

While recovering in the hospital after being diagnosed with bone cancer at age 18 and having most of his right leg amputated, Terry saw the suffering of other cancer patients, especially children, and wanted to do something about it. His answer was his personal Marathon of Hope.

Canada Post said of the Canada 150 Marathon of Hope stamp: “On April 12, 1980, Terry Fox embarked on a quest to run across Canada to raise money for cancer research. He ran nearly a full marathon a day before he was forced to abandon his run in Thunder Bay, Ont., when his cancer spread. Fox died at age 22 in 1981 but his legacy lives on; the annual Terry Fox run has raised more than $700 million worldwide. The stamp shows Fox running in his iconic Marathon of Hope T-shirt.”

This and the other nine stamps in the Canada 150 set will be available in self-adhesive form in booklets of 10, and in gummed panes of 10 stamps. The stamps can be preordered from Canada Post.