The Cape of Good Hope triangle stamps: Inside Linn’s 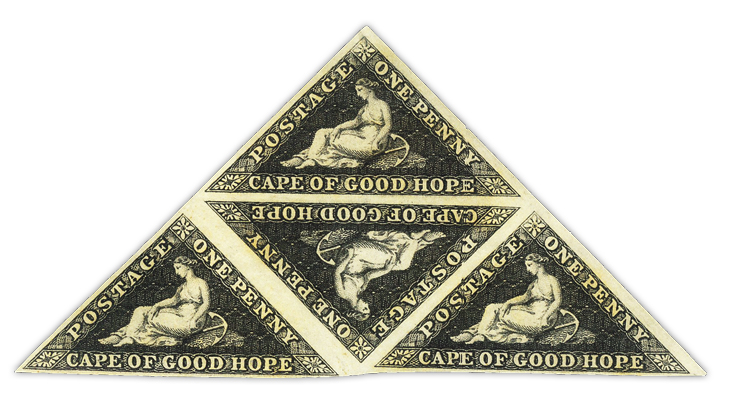 If you're curious about the triangle stamps of the Cape of Good Hope, you won't want to miss Sergio Sismondo's Unveiling Classic Stamps column in the July 15 issue of Linn's Stamp News.

The July 15 monthly issue of Linn’s Stamp News just landed on the presses and goes in the mail to subscribers Monday, July 1. And if you subscribe to Linn’s digital edition, you’re at the head of the line with early access Saturday, June 29. Here are three stories you won’t want to miss.

Cape of Good Hope: postal reform and its 1853 triangle stamps

In this month’s installment of Unveiling Classic Stamps, Sergio Sismondo leads a detailed and fascinating exploration of the philatelic history of the Cape of Good Hope. Among the many highlights, of course, is his discussion of the famous triangle stamps of 1853. There’s much to learn, so dig in and enjoy.

Moving from the majors to the minors

Don’t let the headline of Michael Baadke’s Stamp Collecting Basics column lead you astray: He isn’t talking about a baseball player’s prospects. Instead, he provides a splendid review of the differences between major and minor listings in the Scott postage stamp catalogs. This is one you’ll want to bookmark for future reference.

There are myriad philatelic oddities beyond typical postage stamps. Among the more unusual are the so-called ferry stamps of Denmark. As Christer Brunstrom explains in Nordic Stamp Scene, ferry stamps provided postal connections among Denmark’s 72 inhabited islands. Climb aboard and read the entire column to learn more.