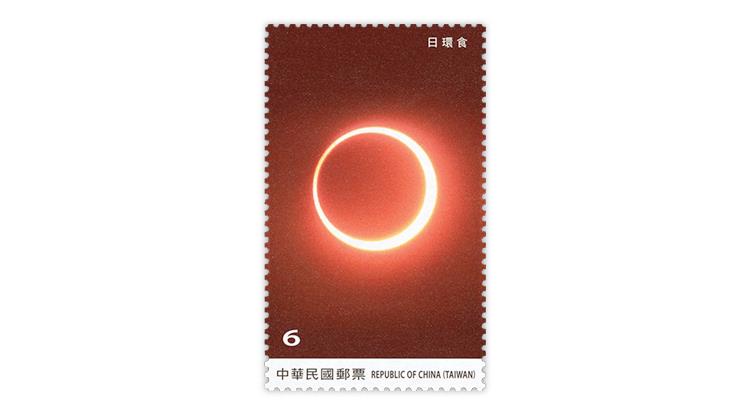 Taiwan issued four Astronomy stamps June 22. This NT$6 stamp shows an annular solar eclipse, during which the sun produces what looks like a ring of fire around the moon. 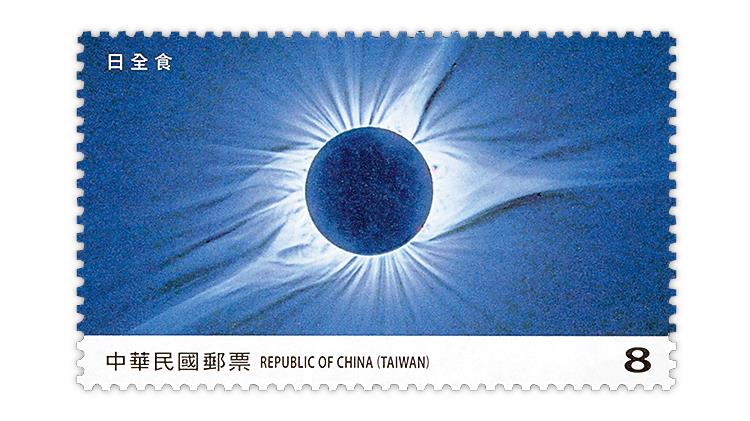 A complete solar eclipse is illustrated on an NT$8 stamp in Taiwan’s Astronomy set. 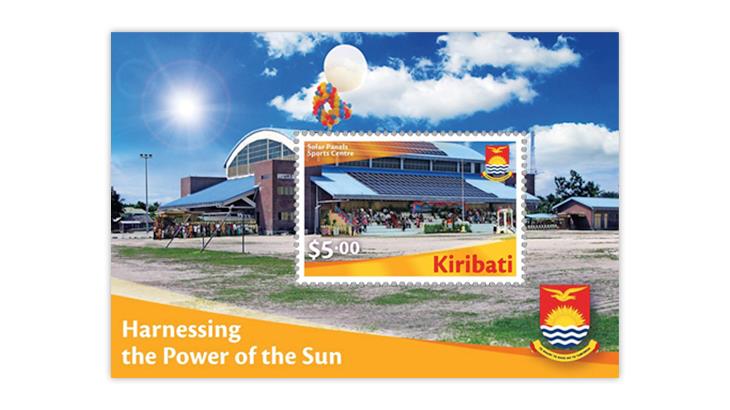 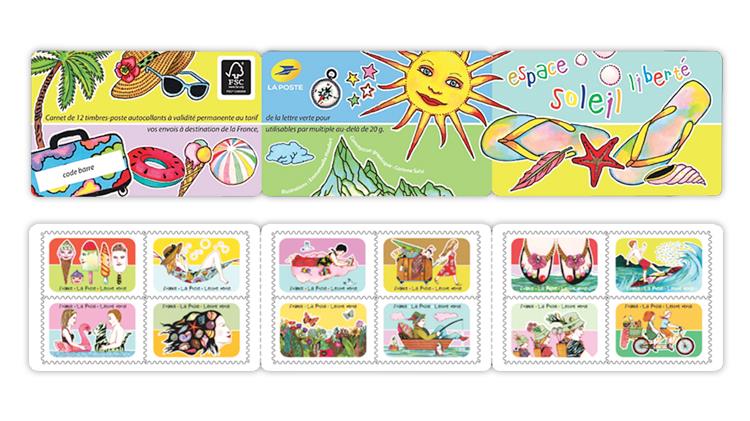 A booklet of 12 stamps from France celebrates space, sun and freedom during vacations. Blowing bubbles, surfing and watching butterflies are among the activities represented on the stamps. 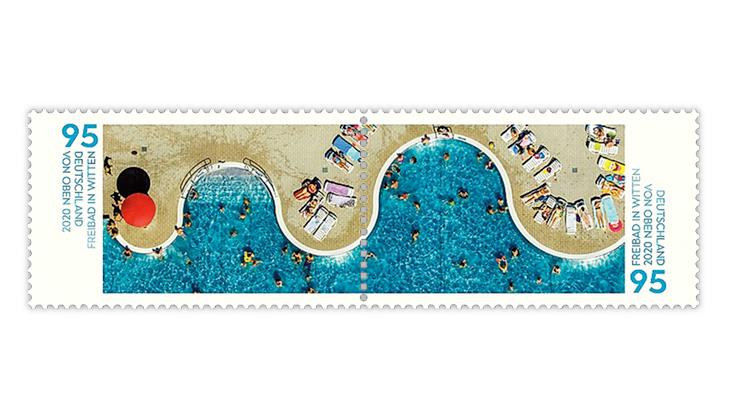 People in and around a wave-shaped pool soak up the sun on this pair of German stamps, the first issue in a new series called Germany From Above.
Previous
Next

Different aspects of the sun are presented on new stamps from Taiwan, Kiribati, France and Germany.

A NT$6 stamp depicts an annular solar eclipse. The new-issue announcement from Taiwan’s Chunghwa Post explains that this type of eclipse occurs “when the Sun, Moon and Earth are in near-perfect alignment and the Moon is relatively far from the Earth.” As a result the sun is seen “only as a halo of light like a golden ring.”

A total solar eclipse is illustrated on an NT$8 stamp. In this case, the moon completely blocks the sun.

The other two stamps in the Astronomy set feature a comet (NT$6) and a total lunar eclipse (NT$8).

Delta Design Corp. designed the stamps, and Taiwan’s Central Engraving and Printing Plant printed them in separate panes of 18 and a souvenir sheet with all four stamps.

Kiribati will focus on harnessing the power of the sun on stamps and a souvenir sheet scheduled to be issued Aug. 31.

In fact, those words are inscribed in the selvage of the souvenir sheet. The $5 stamp in this sheet reproduces a photograph of solar panels at the Betio Sports Complex.

According to a Sept. 23, 2016, press release from the World Bank, this sports complex was one of four government-owned facilities where large-scale solar panels were installed as “part of a new World Bank project designed to reduce Kiribati’s dependence on imported fuel.”

Kourabi Nenem, Kiribati’s vice president and minister for Kiribati Ministry of Public Works and Utilities at the time, said: “These solar panels take advantage of our plentiful supply of sun, and will provide a more reliable and sustainable source of energy for the future of our nation.”

The four stamps in the set also show photographs that feature solar panels.

The 50¢ denomination pictures a solar farm. Radar equipment and a solar panel at Betio Harbor are shown on the $1.50 stamp.

Fun in the sun

New issues from France and Germany emphasize fun in the sun.

France issued a booklet of 12 stamps June 22 called “Espace, Soleil, Liberte,” which translates to “Space, Sun, Freedom.” The stamps are intended for use by people on vacation on their postcards and letters to family and friends.

These self-adhesive booklet stamps are nondenominated, inscribed “lettre vetre” indicating that they are for the green, or second-class, rate (currently €0.97).

In announcing this booklet, France’s La Post said it allows “you to give news during the summer with colorful, sunny stamps: you work in tandem, you enjoy ice cream, you are on a cloud while reading, in your dreams by the sea, relaxing by angling, in the countryside among flowers and butterflies … ”

Artist and children’s book author Emmanuelle Houdart created the designs for the stamps. Her whimsical designs have appeared on previous French booklet stamps, including the 2014 booklet representing various smells (Scott 4682-4693) and the 2015 and 2016 booklets illustrating animal proverbs and idioms (4853-4864 and 5079-5090).

A se-tenant (side-by-side) pair of €0.95 German stamps issued July 2 shows an aerial view of swimmers and sunbathers enjoying an outdoor pool on a sunny day.

The stamps are the first in a series called Germany From Above. The pool shown on the two stamps is located in the Witten-Annen borough of the city of Witten.

According to information from Germany’s Deutsche Post, the pool dates back to a fishing pond created in 1903, which later was transformed into a bathing area and eventually a swimming pool. Among the many updates through the years include the reshaping of the pool with curved lines resembling waves.

Bettina Walter’s design for the pair of stamps is based on a photograph by Hans Blossey. Bagel Security-Print printed the stamps by offset in panes of 10 (five se-tenant pairs).