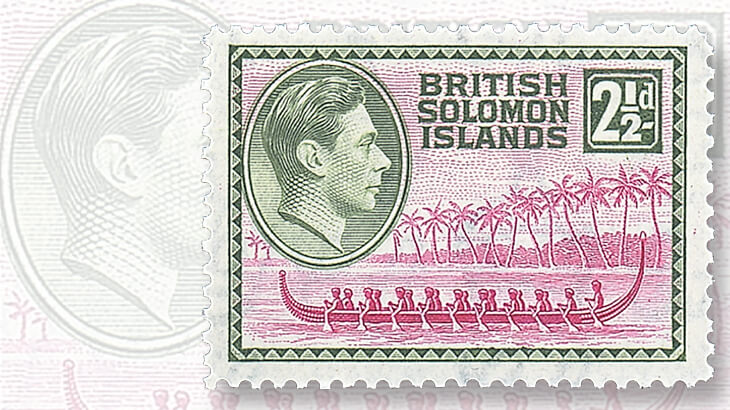 Solomon Islands — Collecting classic stamps of the world has gained greatly in popularity over recent years. Some collectors — exhausted by the deluge of new issues in unfamiliar subjects, outlandish shapes, and strange formats with unsoakable adhesive — have turned to classic stamps to recapture the joy of their youthful stamp collecting.

For the aficionado of classic stamps, few issues can rival the beautifully engraved and colorful bicolor definitive stamp sets of the British Empire. For collectors of a certain age, the scenes depicted often bring back fond memories of Frank Buck and Richard Halliburton, Saturday matinees and serial chapters. Ah youth! To return to those thrilling days of yesteryear, the 1939-1951 set of 13 King George VI and Local Scenes stamps (Scott 67-79) is hard to beat.

The subjects depicted include a smoking volcano, coconut plantation, spears and shield, a war canoe, and a policeman and native chief. The 2017 Scott Classic Specialized Catalogue of Stamps and Covers 1840-1940 values the set in unused hinged condition at just $57.25 and in used condition at just $60. That is an extraordinarily inexpensive ticket for a drink from the philatelic Fountain of Youth.