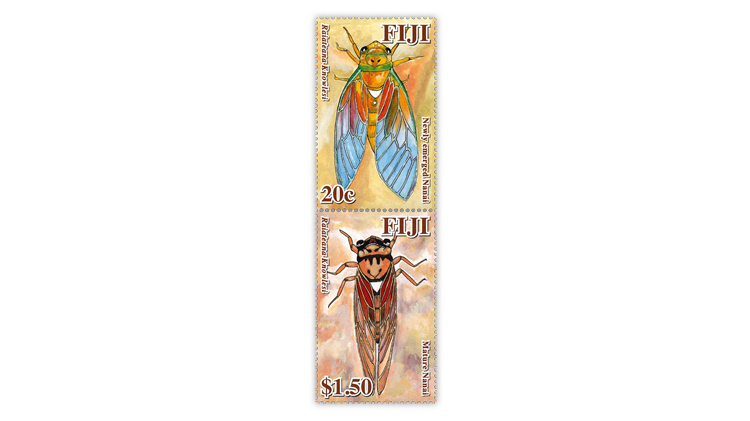 The vertical pair of Fiji’s 2010 Raiateana Knowlesi (Fijian cicada) stamps (Scott 1242) is in demand by topical collectors and hard to find.

The Republic of Fiji is comprised of more than 300 islands in Melanesia in the South Pacific Ocean. About 110 of the islands have permanent inhabitants. Most of the population lives on the two main islands, Viti Levu and Vanua Levu.

Indigenous Fijians are a mixture of Austronesian and Melanesian peoples. About 37 percent of the present population of almost 900,000 are the descendants of Indian workers imported by the British.

On June 30, 2010, Fiji issued a vertical pair of Raiateana Knowlesi stamps (Scott 1242). These insects, also known as Fijian cicadas, begin as eggs, live underground as nymphs and emerge after eight years to mature and breed and start the cycle over.

The upper 20¢ stamp in the pair shows the cicada as a newly emerged juvenile. The lower $1.50 stamp depicts a fully mature insect.

To the best of our knowledge, this is the only stamp issue that depicts this Fijian cicada, making the pair a must-have for insect topical collectors who collect cicadas.

The 2019 Scott Standard Postage Stamp Catalogue values the vertical pair at $2 in both mint never-hinged condition and used condition.

Despite being relatively inexpensive, this pair is not easy to find. If you see it offered at or near Scott catalog value, it is a very good buy.