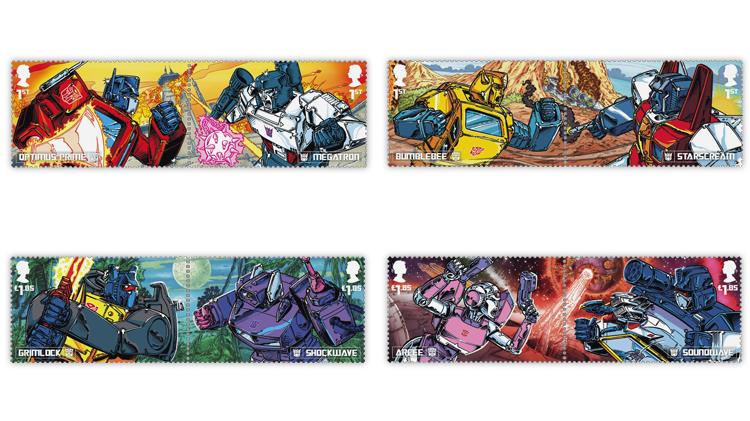 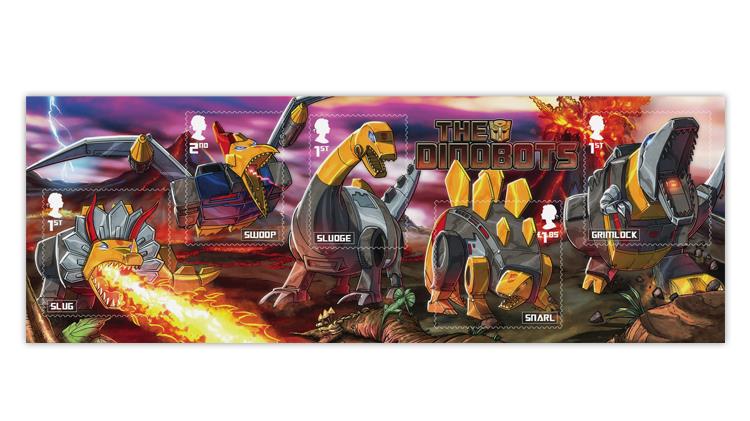 Great Britain’s Royal Mail celebrates the British contribution to The Transformers animated franchise on its Sept. 1 issue of 13 stamps.

“The Transformers — alien robots who can change into vehicles, machinery and weapons — first appeared in toy shops and on TV screens in 1984,” Royal Mail said. “Nearly 40 years on, thanks to the addition of comic books, computer games and movies, the likes of Optimus Prime and Megatron have become pop-culture titans.”

Four of these stamps are valued at the first-class rate (currently 95 pence). The stamps in the other two pairs are denominated at £1.85 (the rate for letters to Europe up to 100 grams and worldwide up to 20 grams).

Each pair shows two Transformers locked in battle. The first-class stamps show Optimus Prime against Megatron on one pair and Bumblebee versus Starscream on the other. The £1.85 stamps depict Grimlock fighting Shockwave and Arcee battling Soundwave.

These battles mirror the conflict in The Transformers animated television series, where the heroic Autobots and evil Decepticons fight in a civil war that makes its way from the distant planet of Cybertron to Earth.

Additional character groups, such as Insecticons (a group of insectoid troublemakers) and Dinobots (a rowdy band of warriors), added diversity to this core group of characters.

The Transformers media franchise was spawned by Transformers toys made by the Japanese company Takara (now known as Takara Tomy) and the American company Hasbro. In this century, seven films have been produced in The Transformers movie franchise, beginning in 2007.

To read the full story, subscribe to Linn’s Stamp News.