Trinidad Landing of Columbus stamp from 1898 in demand 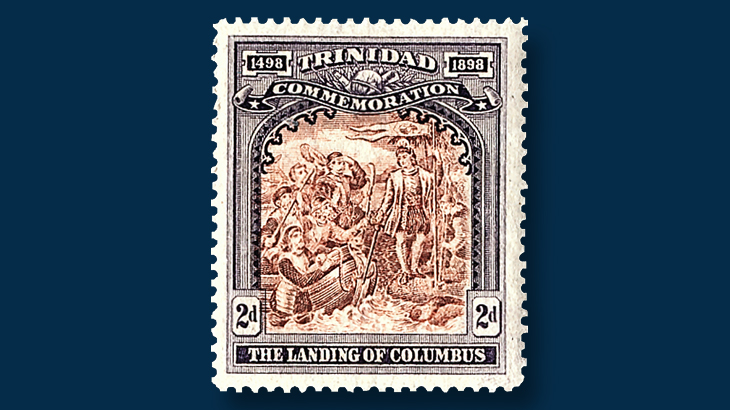 The 1898 Trinidad 2-penny Landing of Columbus stamp (Scott 91) is in demand and a good buy in mint never-hinged condition at $5.

There was a time when every school child in America was taught the importance and achievements of Christopher Columbus. Cities, counties, streets, a Canadian province and a Latin American country were all named for him. Heroic statues dotted the landscape and a national holiday was celebrated in his honor.

Because of some revisionist interpretations, Columbus has fallen on hard times. Some historians have even rebranded his exploits as genocide. Despite all of this, Columbus remains popular with topical stamp collectors.

Many commemorative stamps have been issued for Columbus. One of the earliest and most attractive was issued by Trinidad. Trinidad lies in the Caribbean Sea just 7 miles off the coast of Venezuela.

Columbus made landfall on the island during his third voyage in 1498. Trinidad became a British colony in 1797. Today it is part of the independent republic of Trinidad and Tobago.

The 2018 Scott Standard Postage Stamp Catalogue values the stamp at $3.25 in unused hinged condition. Although it is not a difficult stamp to find, there is steady demand for it.

The stamp is a good buy in unused hinged condition at Scott catalog value. Try spending a little extra and get a mint never-hinged example, which is a great buy at $5.