Turbulent history of Bulgaria’s peasants revealed through its stamps 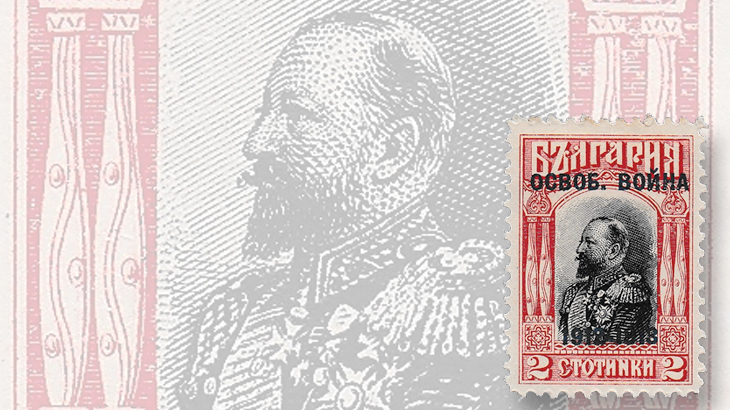 To commemorate its victory in the First Balkan War of 1912-13, Bulgaria overprinted seven stamps from its 1911 regular issue. These overprinted stamps were issued Aug. 6, 1913. Pictured is the overprinted 2-stotinki Czar Ferdinand stamp. 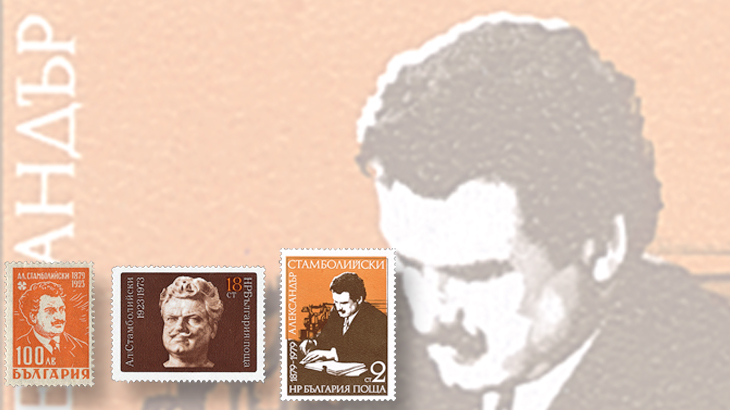 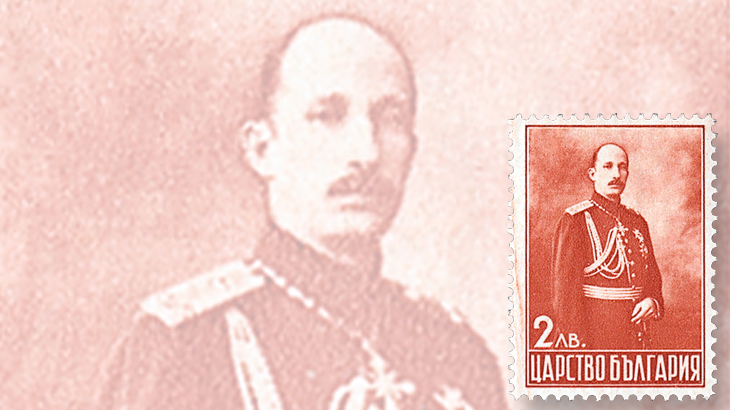 Czar Boris III, who pardoned Agrarian Union leader Aleksandar Stamboliski in 1919, is pictured on a 2-lev stamp issued in 1937. 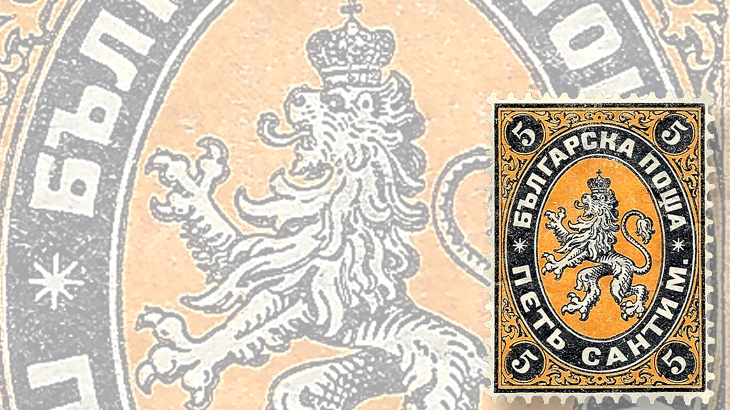 Bulgaria’s first postage stamps, issued May 1, 1879, depict the bold Lion of Bulgaria. Shown is the 5-centime black and orange stamp.
Previous
Next

I suspect that Bulgaria is a country whose stamps are not widely collected in the United States.

This is probably because Bulgaria is a relatively small country to start with, and it has never been one of the major sources of immigration to the United States.

A generous estimate is that there are about 250,000 people of Bulgarian ancestry in the United States, most of whom live in California, Illinois, New York, and Florida.

However, a great deal can be learned about Bulgaria’s history and culture from its stamps.

Bulgaria is located in the Balkan Peninsula on the Black Sea, bordering Turkey, Romania, Serbia, Macedonia, and Greece.

Like much of the rest of the Balkan population, Bulgarians are ethnically and linguistically Southern Slavs and religiously Eastern Orthodox Christians.

Bulgaria was a major empire from the ninth to the 14th centuries. Conquered by the Ottoman Empire in 1396, Bulgarians spent the next 500 years trying to oust the Muslim conquerors and regain their independence.

Bulgaria has close historical, cultural, linguistic, and religious ties to Russia. Bulgaria was one of the chief beneficiaries of Russian Slavophilism and Panslavism, because Russia was always eager to help the Bulgarians against the Ottoman Turks.

With Russian help, Bulgaria became an autonomous principality of the Ottoman Empire in 1878.

Bulgaria issued its first postage stamps May 1, 1879. Shown nearby is the 1879 5-centime black and orange Lion of Bulgaria (Scott 1).

As the various Christian nations in the Balkans shook off the Ottoman yoke in the late 19th and early 20th centuries, boundary disputes led to wars.

Bulgaria was on the winning side in the First Balkan War (1912-1913), virtually doubling its territory.

To commemorate this victory, Bulgaria overprinted seven stamps from its 1911 regular issue. These overprinted stamps were issued Aug. 6, 1913. Shown is the overprinted 2-stotinki Czar Ferdinand (Scott 105).

Attacking its erstwhile allies in the Second Balkan War (1913) proved disastrous, and Bulgaria lost much of the territory it had gained.

In an effort to recoup its losses, Bulgaria went with the Central Powers in World War I, which was another big mistake.

Aleksandar Stamboliski (1879-1923) was the leader of the Agrarian Union political party and the editor of its newspaper.

Like his American Socialist counterpart, Eugene V. Debs, Stamboliski was imprisoned for his anti-war efforts.

Court-martialed and sentenced to life in prison in 1915, he was eventually pardoned by Czar Boris III in 1919. Illustrated nearby is a 2-lev Czar Boris III stamp issued in 1937 (Scott 313).

The Agrarian Union was the political party representing Bulgaria’s peasants, who comprised roughly 80 percent of the population.

With the collapse of the old multinational empires and the emergence of new nationalist regimes, much hope was vested in the Eastern European peasant class.

Writers such as Leo Tolstoy and Ranier Maria Rilke had romanticized the peasantry as nature’s noblemen with an innately democratic and altruistic spirit. Time would tell that peasants were not much different from any other class of people.

Stamboliski’s Agrarian Union won a plurality of votes in the general election of 1919. He entered a coalition government with the socialists and communists.

Control of the government allowed him to fix the system so that he won more of the vote in the election of March 1920. He then ejected enough members of the Sobranie (parliament) from other parties to have an outright majority.

Stamboliski was an imposing figure, with his ferociously quivering mustachios and great leonine mass of black hair.

He also developed an intimidating scowl for public occasions that would later be matched by Benito Mussolini. He was personally brutal, violent, domineering and corrupt.

Although he had the near total support of the peasantry, he was cordially despised by much of the rest of the country. No great patriot, he saw himself more as a Southern Slav than as a Bulgarian.

He hoped to form a Slavic confederation with the other Balkan nations. This won him the enmity of the army.

He made peace with the Kingdom of Serbs, Croats, and Slovenes, which angered the Macedonian minority and its nationalist terrorist arm, the Internal Macedonian Revolutionary Organization (IMRO).

An anti-monarchist, he boasted that he “held the little Czar in the palm of his hand,” which did not endear him to supporters of the imperial family.

On the positive side, he reformed the tax code, extended education to the peasantry, carried out extensive land reform, and established an agricultural bank to provide credit to the peasant farmers. He also instituted a system of labor conscription to carry out public works.

Although he faithfully carried out the provisions of the Treaty of Neuilly, which imposed harsh conditions on Bulgaria for joining the Central Powers in World War I, he was little liked by the Western Allies.

Despite being well-educated for a peasant in his time, they found him to be uncouth, undiplomatic, and politically radical.

Stamboliski was not a democrat. In addition to his shenanigans in the Sobranie, he formed the Orange Guard, a paramilitary group of peasant thugs, who punished his political enemies.

An unfavorable newspaper article was likely to result in a smashed press and a cracked head for the editor.

Stamboliski generally allowed the Orange Guard to run roughshod over city dwellers and townsfolk, taking what they wanted and beating anyone who objected. Stamboliski said that for as long as he ruled, the peasant clubs of the Orange Guard were the real constitution of Bulgaria.

In 1923, confident in the support of the peasants and the power of the Orange Guard, Stamboliski launched a general repression of the Communist Party, the second largest party in the Sobranie. He expected to receive the support of the non-Communist elements in doing so.

Instead, on June 9, 1923, the Army, the IMRO, and the bourgeoisie political parties used it as a pretext to remove him from power by means of a coup.

Peasant clubs proved ineffective against machine guns, and there was only sporadic fighting in opposition to the coup.

Stamboliski was arrested and held in his hometown, Slavovitsa. Here, on June 14, the IMRO found and brutally tortured him before executing him.

After the Communists seized power in Bulgaria in 1946, they found Stamboliski, who could no longer speak for himself, an occasionally useful icon in worker-peasant solidarity. In that same year, a 100-lev stamp picturing the agrarian leader was issued (Scott 527).