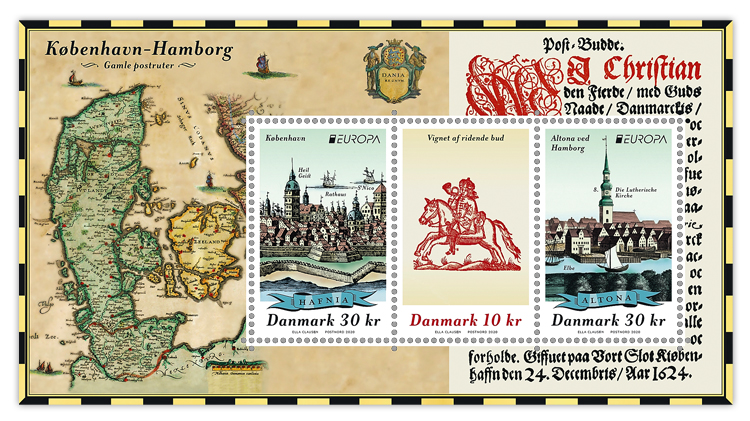 The theme for this year’s multination Europa series is ancient postal routes. A Danish souvenir sheet focusing on Denmark’s first post route between Copenhagen and Altona/Hamburg is scheduled to be issued May 11. 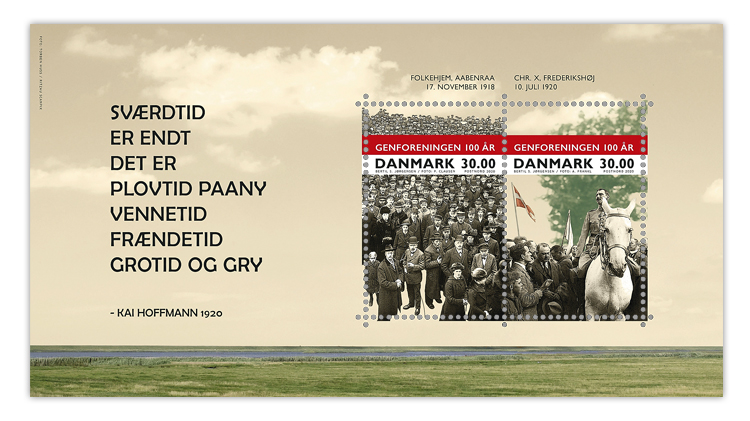 Denmark will also issue a souvenir sheet May 11 to celebrate the 100th anniversary of South Jutland’s reunification with Denmark.
Previous
Next

PostNord, the postal authority for Denmark, has announced that it will issue two souvenir sheets May 11. One illustrates this year’s Europa theme of ancient postal routes, and the other commemorates the 100th anniversary of South Jutland’s reunification with Denmark.

According to information from PostNord, the Europa souvenir sheet “focuses on Christian IV’s establishment of the post office in 1624 and Denmark’s first post route between Copenhagen and Altona/Hamburg.”

According to the history section of the PostNord website, the 1624 royal ordinance that created the post office also established nine mail routes.

The website said: “The most important route was the one between Copenhagen and Hamburg where letters, parcels and goods were transported by carriage whereas postmen who went by foot and only carried letters served the other routes.”

Shown in the selvage of the souvenir sheet are an old map and a representation of the 1624 ordnance.

The sheet includes three se-tenant (side-by-side) stamps, although only two of them include the Europa emblem; the middle stamp does not. Denominated 10 kroner, this stamp shows a postrider with a post horn. According to PostNord, postriders began to carry mail on the Hamburg route in 1640.

The other two stamps, each denominated 30k, show the skyline of Copenhagen in 1728 and Altona in 1742, respectively. At the time, Altona was not part of Hamburg because it was under Danish rule from 1640 to 1864.

The stamp on the left shows a photograph of the meeting at Folkehjem (the People’s Home) in Aabenraa on Nov. 17, 1918. At that meeting, the framework for the upcoming referendum was adopted to determine whether Schleswig would be part of Germany or Denmark.

The region was divided into different zones and referendums, or plebiscites, were held.

On Feb. 10, 1920, North Schleswig voted to return to Denmark, while on March 14, South Schleswig decided to stay with Germany.

A website for Kongea Path (Kongeastien) explained what happened next: “South Jutland’s [North Schleswig] incorporation into Denmark was done gradually. On 5 May, Danish troops moved into the area, and on 20 May Danish currency was introduced in the region. The Danish postal service was also introduced on the same day.

“On 15 June 1920 (Reunification Day) the Danish Government took over the control of South Jutland, and the German passport and customs controls officially moved from the river Kongea to the current border.

“The law on ‘The Southern Jutland areas incorporated in Denmark’ was signed by King Christian X on 9 July. The following day, Reunification was celebrated by King’s famous ride on the white horse over the erased Kongea border.”

The stamp on the right shows a photograph of the king’s ride.