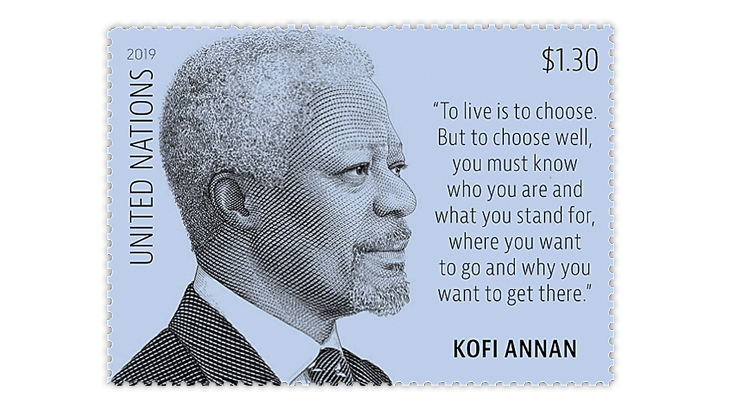 The United Nations Postal Administration is honoring former Secretary-General Kofi Annan on a stamp to be issued May 31.

The $1.30 definitive (regular-issue) stamp is for use from the post office at U.N. headquarters in New York City.

A first-day ceremony will take place at the American Stamp Dealers Association’s spring stamp show at the Watson Hotel, 440 W. 57th St., New York, N.Y. The ceremony will begin at noon. The show runs through June 2.

Designed by Rorie Katz of UNPA, the stamp depicts a portrait of Annan by artist and engraver Martin Morck. It also includes a quote from the diplomat: “To live is to choose. But to choose well, you must know who you are and what you stand for, where you want to go and why you want to get there.”

According to his biography on the U.N. website, he was the first secretary-general to emerge from the ranks of the U.N. staff, which he joined in 1962 as an administrative and budget officer with the World Health Organization.

The U.N. website also said: “One of Mr. Annan’s main priorities as Secretary-General was a comprehensive programme of reform aimed at revitalizing the United Nations and making the international system more effective. He was a constant advocate for human rights, the rule of law, the Millennium Development Goals and Africa, and sought to bring the Organization closer to the global public by forging ties with civil society, the private sector and other partners.”

He wrote about his 40 years with the United Nations in the memoir Interventions, A Life In War And Peace, published in 2012 by Penguin Press.

Among his many honors, Annan and the United Nations were jointly awarded the Nobel Peace Prize in 2001 “for having revitalized the UN and for having given priority to human rights,” according to the Norwegian Nobel Institute.

“The Nobel Committee also recognized his commitment to the struggle to contain the spreading of the HIV virus in Africa and his declared opposition to international terrorism.”

In 2007, he established the Kofi Annan Foundation “as a catalyst for lasting peace and inclusive governance by anticipating looming threats security, development and human rights,” according to the foundation’s website.

Joh. Enschede of the Netherlands printed the stamp by offset lithography in sheets of 20. The initial print quantity was 210,000 stamps.