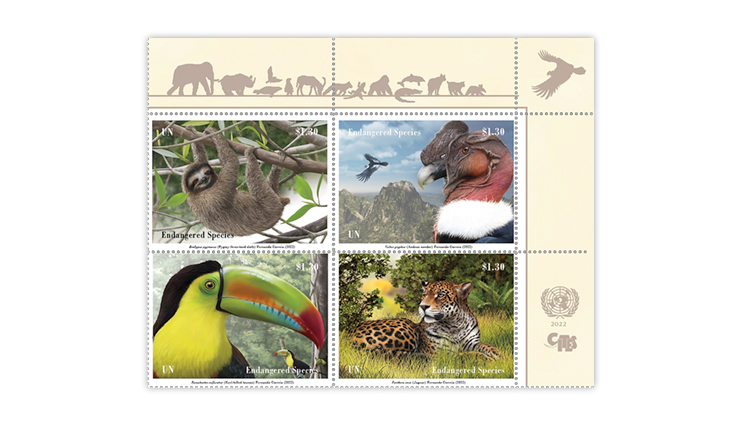 The United Nations Postal Administration will issue a new set of 12 Endangered Species stamps March 18, each with four se-tenant (side-by-side) designs. The four $1.30 stamps for use from the post office at U.N. headquarters in New York City show a pygmy

The stamps will be issued at the March Party stamp show to be held Friday, March 18, through Sunday, March 20, at the Best Western Plus Hotel, 15471 Royalton Road, Strongsville, Ohio.

A first-day ceremony is scheduled for March 18 at noon.

Since 1993, the Endangered Species stamp series has represented the need for protection of plants and animals listed on appendices of the Convention on International Trade in Endangered Species of Wild Fauna and Flora. Known as CITES, the convention is an international agreement among governments to safeguard trade in specimens of wild animals and plants.

Like previous stamps in this series, the new stamps are issued in panes of 16, each with four se-tenant (side-by-side) designs. There is a separate pane for each U.N. post office.

According to the UNPA’s Bulletin for collectors, the administration issues the Endangered Species stamps “to celebrate the many beautiful and varied forms of wild fauna and flora, and to raise awareness about the multitude of benefits that conservation provides to people.”

The pygmy three-toed sloth can only be found on the Isla Escudo de Veraguas, a small island off the coast of Panama. The smallest of the three-toed sloths, Bradypus pygmaeus has undergone island dwarfism, which is when a species limited to a small environment evolves to a smaller size over time.

The biggest threat to the pygmy three-toed sloth is the destruction of this already small habitat, according to a global conservation program launched by the Zoological Society of London.

The Andean condor can weigh up to 33 pounds, and it has a wingspan reaching over 10 feet. The Andean condor lives in mountainous, coastal and desert areas with strong air currents that help support its massive frame while it flies.

According to National Geographic, while Andean condors have lived to be over 75 years old in captivity, they are slow to reproduce. A mating pair produces one offspring every other year. The population is in decline, according to the website, but reintroduction programs are working to counter this trend.

A large, colorful bill makes the keel-billed toucan immediately recognizable, but this may be working against the species.

According to Animal Diversity Web, an online database operated by the University of Michigan, CITES lists and monitors this species not because it is immediately threatened by hunting and habitat loss, but because it looks similar enough to other species that are more severely threatened.

CITES groups jaguars on its list of species needing the greatest level of protection. According to Animal Diversity Web, while populations of jaguars remain stable, the large predatory cats are threatened by hunting, habitat destruction and persecution.

Part of the persecution results from the conflict between jaguars and the cattle ranching industry. Countries such as Brazil and Mexico limit jaguar hunting to the problem animals that repeatedly kill livestock, but ranchers will still shoot jaguars on sight, according to Animal Diversity Web.