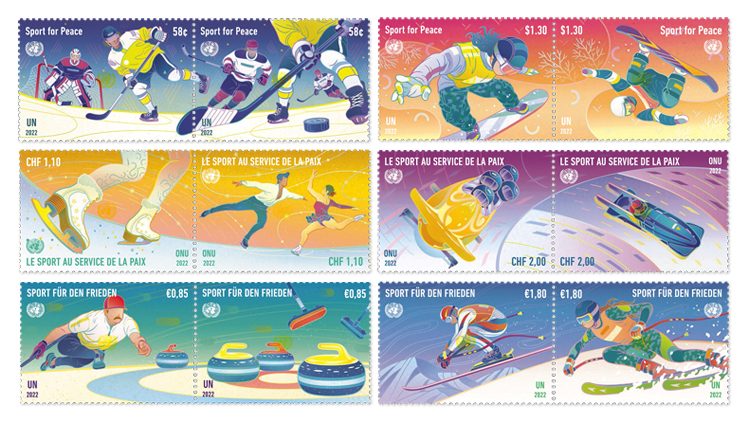 The United Nations Postal Administration issued Sport for Peace stamps Jan. 14 to commemorate the 2022 Beijing Winter Olympics. The Games are scheduled to run from Feb. 4-20.

This marks the first time that the UNPA has issued stamps for the Olympic Winter Games.

“The Olympic Games provides a meaningful opportunity to harness the power of sport to foster an atmosphere of peace, development, resilience, tolerance and understanding among nations,” the UNPA said in its new-issue announcement.

The two panes for the post office at U.N. headquarters in New York City represent hockey and snowboarding, respectively.

The hockey pane includes six 58¢ stamps with two different designs. The designs together show opposing teams in a hockey game.

On one design, a player in a yellow uniform protects the puck, while opposing players approach from behind. On the other design, the yellow player’s teammate appears to be ready for a pass, while the opposing goalie keeps a close eye on the action.

A translucent gold U.N. logo is imposed over the image in the center of the stamps, along with lines and dots on the blue gradient background.

Each stamp is inscribed “Sport for Peace” and includes the U.N. logo, the initials “UN,” the 2022 year date and the denomination.

The U.N. logo and the words “Sport for Peace” in English and Chinese appear in the selvage, or border, above the stamps.

The selvage also shows an illustration of the Great Wall of China, along with lines and concentric circles that represent the face-off circles in a hockey rink. Copyright information is in the bottom right of the selvage.

The two designs in the pane of six $1.30 stamps show snowboarders both right side up and upside down against a background of various shades of red and orange.

The background also shows a translucent gold U.N. logo, blotches that resemble snowflakes, lines forming what looks to be branches of trees, and small half circles. The snowflakes and half circles continue into the selvage, replacing the face-off circles on the Hockey pane.

The other panes follow the same basic selvage format, each showing an illustration of the Great Wall in the selvage. However, each pane pulls something specific from the stamps into the selvage, such as the face-off circles and snowflakes.

The stamps for use from the Palais des Nations are denominated in Swiss francs. Figure skating is featured on the 1.10-franc stamps and bobsleigh on the 2fr.

On a background of yellow tones, the Figure Skating stamps show a skater’s leg on one design, and two skaters performing a routine on the other.

The 2fr Bobsleigh stamps show two different events on a purple background. A yellow sled with a crew of four represents the four-man competition, while the single pilot in the blue sled portrays the women’s monobob.

Women’s monobob will be a new event for the 2022 Winter Games. There will be no men’s monobob, nor four-woman bobsleigh competition.

The €0.85 and €1.80 stamps for use from the Vienna International Center feature curling and alpine skiing, respectively. One curling design shows a player delivering a stone, and the other shows stones and brushes.

One €1.80 stamp depicts an illustration of an airborne skier. The other shows a skier doing the kind of carved turn seen in slalom events.

Cartor Security Printer printed the stamps by offset lithography plus hexachrome, according to the UNPA. The panes of six measure 122 millimeters by 145mm. The stamps are 50mm by 35mm.