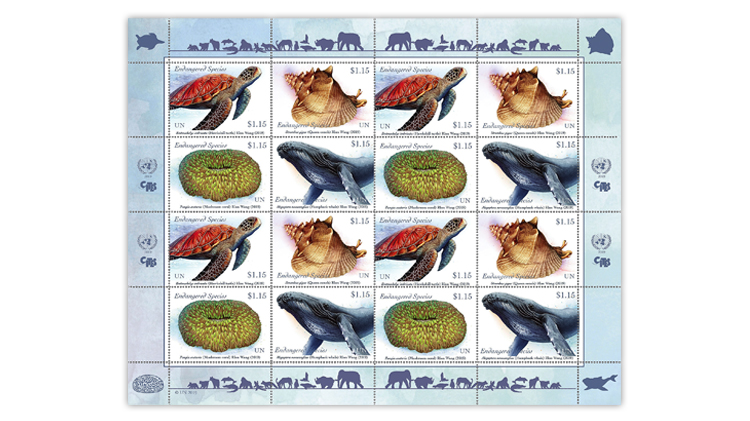 The United Nations Postal Administration will issue three panes of 16 stamps each April 26 as part of the ongoing Endangered Species series. Illustrations in the selvage include silhouettes of different endangered species at the top and the four species s 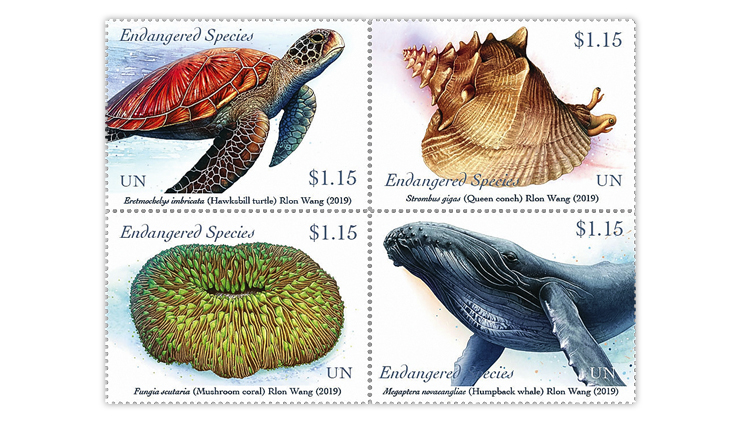 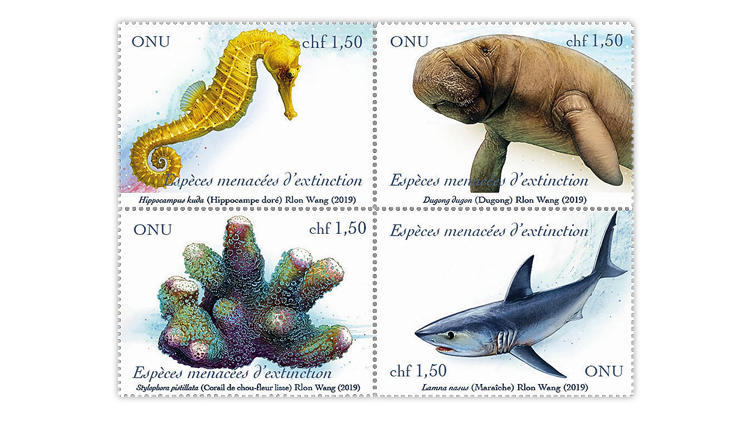 Shown on the four 1.50-franc U.N. Endangered Species stamps for use from the post office at the Palais des Nations in Geneva, Switzerland, are the common seahorse, dugong, smooth cauliflower coral and porbeagle shark. 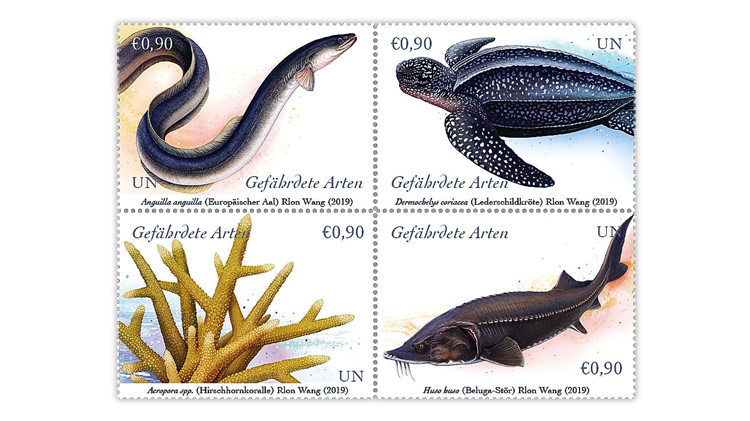 The European eel, leatherback turtle, staghorn coral and beluga sturgeon are featured on the United Nations €0.90 Endangered Species stamps for use from the post office at the Vienna International Center in Vienna, Austria.
Previous
Next

A dozen water-based species are found on the next set of stamps in the United Nations Postal Administration’s Endangered Species series.

The stamps will be issued April 26 at Westpex. This stamp show will take place April 26-28 at the San Francisco Airport Marriott Waterfront Hotel in Burlingame, Calif.

A first-day ceremony is scheduled for 1 p.m. April 26.

The new stamps will be issued in panes of 16, each with four se-tenant (side-by-side) designs. The set includes three panes, one each for the U.N. post offices in New York City; the Palais des Nations in Geneva, Switzerland; and the Vienna International Center in Austria.

Since 1993, the Endangered Species stamp series has represented the need for protection of plants and animals listed on appendices of the Convention on International Trade in Endangered Species of Wild Fauna and Flora. Known as CITES, the convention is an agreement among more than 180 governments to safeguard trade in specimens of wild animals and plants.

A sea turtle with a hawklike beak and a colorful shell that has been used to make jewelry and other decorative items, the hawksbill turtle ranges from tropical and subtropical waters of the Indian to Pacific and Atlantic oceans.

The hawksbill turtle is considered to be critically endangered. Although international trade of its shell is now illegal, a black market still exists. Pollution and corruption of nesting sites are among the reasons that have led to an 80 percent decline in hawksbill population over the past 125 years.

Among the largest water mammals, humpback whales grow as long as 52 feet, weighing up to 30 tons or more. They are known to migrate 16,000 miles per year and have regained a once-thinning population to about 80,000 individuals since strict protection measures were created in the second half of the 20th century.

The queen conch, a large edible sea snail, is native to the Caribbean and tropical northwestern Atlantic. It is not endangered, but is threatened because of overfishing and ocean acidification.

Mushroom corals — which look and act more like plants but are classified animals because they do not make their own food — received their name because they resemble mushrooms. They are often commonly called razor corals. Unlike most other coral, these corals can move and are integral to the expansion of a reef.

The stamps feature illustrations created by Rlon Wang of China.

The stamp designs eliminate any flora or fauna in the background, instead presenting a singular representation of the species. The images are sharp, clear and colorful, similar to the artist’s original work.

United Nations designers contacted the artist after viewing his work on the website Behance (www.behance.net).

Wang was born in Tianshui, Gansu. China, in 1985 and graduated from the Department of Fine Arts in Tianshui Normal University, majoring in Chinese painting, according to his website (www.rlonart.com). He has been an independent illustrator since 2014.

As with other stamps in the series that use original photos or artwork, the artist’s name is inscribed at the bottom of each stamp.

On the panes of 16, the U.N. and CITES logos with a "2019" year date appear on each side of the middle two rows of stamps. Each corner of every pane includes a single silhouette depicting one of the four species shown on the stamps of that pane.

Shown in the selvage across the top and bottom rows is a line of animals in silhouette. The silhouettes appeared on the Endangered Species issues through 2014, disappeared for a few years, reappearing in 2017 with a different vibrant color for each pane. The tone for this year is a more conservative dark, dull blue that coordinates well with the selvage background.

In addition to the panes and blocks of the stamps, the UNPA is offering maximum cards with a block of canceled stamps, and first-day covers franked with individual stamps or blocks.

A special first-day cancellation for each of the three U.N. post offices uses a swimming animal as its main design: a humpback whale (New York), a porbeagle shark (Geneva) and a beluga sturgeon (Vienna).