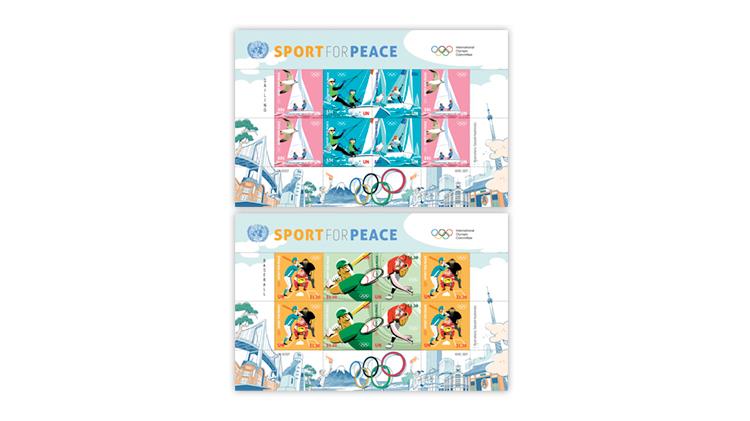 The sports of sailing and baseball are highlighted on the stamps for use from the U.N. post office in New York City. These 55¢ and $1.20 stamps are se-tenant (side-by-side) in two panes of eight. 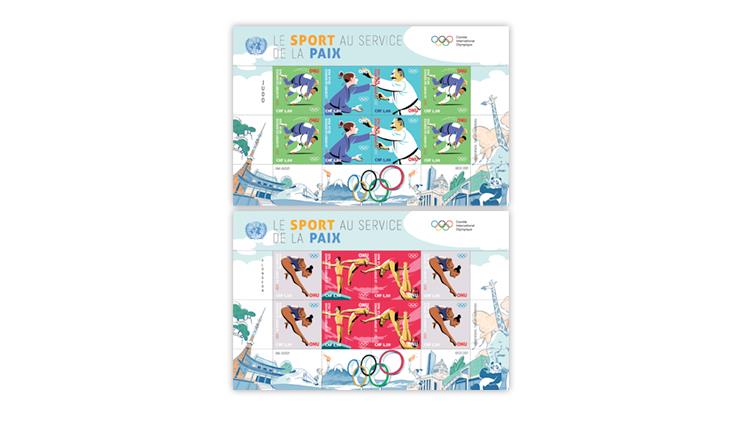 The Sport for Peace stamps for use from the U.N. post office in Geneva, Switzerland, show scenes of Olympic judo and diving. 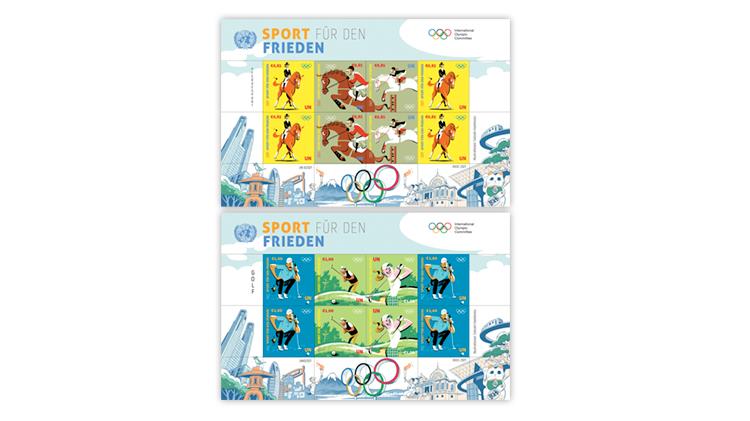 The two panes of eight stamps each for the U.N. post office in Vienna, Austria, feature equestrian events and golf, respectively. 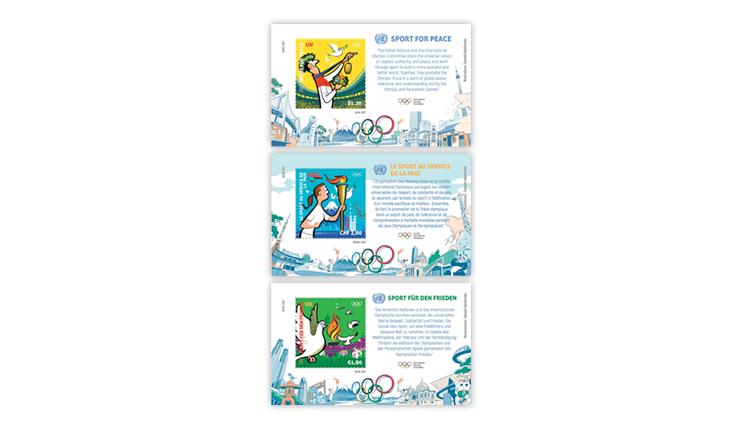 The United Nations Sports for Peace issue includes three souvenir sheets (one shown), each with one stamp and a message about the United Nations and the International Olympic Committee sharing the “values of respect, solidarity and peace and work through
Previous
Next

The United Nations Postal Administration is issuing Sport for Peace stamps and souvenir sheets July 23 to mark the start of the Summer Olympics, Tokyo 2020.

The UNPA reports that it worked closely with the International Olympic Committee in issuing these stamps.

The UNPA said in its new-issue announcement, “We aim to promote the positive influence that sport has on humankind, as we strive for peace and international understanding.”

The UNPA said of the Olympics, “One of the objectives of this great international sporting event is to promote peace, respect, mutual understanding, and goodwill — goals it shares with the United Nations.”

The Sport for Peace issue includes 21 stamps. Three stamps are in separate souvenir sheets, one for each U.N. post office. The other 18 are in six panes of eight, two for each post office. Each pane includes three different se-tenant (side-by-side) designs.

The two panes for the post office at U.N. headquarters in New York City represent sailing and baseball, respectively.

The Sailing pane includes eight 55¢ stamps with three different designs. The design with a pink background shows a bird flying past two men sailing a small boat. The two stamps on a cerulean blue background form a continuous design featuring two teams of two women each in the foreground. A bird sits on the bow of one of the boats. Other sailboats are in the background.

Each stamp is inscribed “Sport For Peace” and includes the 2021 year date, five interlocking rings, the initials “UN” and the denomination. The five Olympic rings are not shown in color on the stamps, but they do appear in five colors (blue, yellow, black, green and red) in the upper right of the selvage, or border, above the stamps.

Also in the selvage above the stamps is the U.N. emblem on the left, with the words “Sport For Peace” beside it and “International Olympic Committee” to the right of the rings.

An article on Lagom Design's website (www.lagomdesign.co.uk) describes the artwork of this Yokohama-based illustrator: “Satoshi has been heavily influenced and inspired by the line styles of the 1950s and 60s, including old children’s illustrated dictionaries and colour prints of that period, as well as craft objects and travelling. He continues to develop his clear and distinctive drawing style and his work regularly appears in Monocle magazine.”

In addition to creating illustrations for the stamps, Hashimoto drew the images for the border, which include buildings, a bridge, a statue of a dog (probably Hachiko) and two runners carrying Olympic torches and approaching Mount Fuji from different directions.

Completing the pane is an additional image of the Olympic rings in color in the lower selvage and two copyright emblems and 2021 year dates (with the initials UN in the lower left and IOC in the lower right).

The stamps for use from the Palais des Nations are denominated in Swiss francs. Judo is featured on the 1-franc stamps and diving on the 1.50fr. The images in the border show buildings; a high-speed train; and a panda, elephant and giraffe.

All of the panes include the border image of Mount Fuji and the two runners with torches.

The €0.85 and €1 stamps for use from the Vienna International Center show equestrian events and golf, respectively. Illustrated in the border are buildings, an elevated monorail, a bird singing and a figurine of a cat with its paw raised. Such figurines are called maneki-neko, which means beckoning or welcoming cat.

Each souvenir sheet includes a single stamp on the left, an inscription on the right, and border images that match those of the panes of eight for that post office.

The $1.20 stamp in the souvenir sheet for use from the New York office pictures an Olympic athlete standing in the center of a stadium. He is wearing a laurel leaf crown and admiring his gold medal. White doves, one with an olive branch, also are shown.

The inscription reads: “The United Nations and the International Olympic Committee share the universal values of respect, solidarity and peace, and work through sport to build a more peaceful and better world. Together, they promote the Olympic Truce in a spirit of global peace, tolerance, and understanding during the Olympic and Paralympic Games.”

The 2fr stamp in the souvenir sheet for the U.N. post office in Geneva depicts a woman running with an Olympic torch while white doves fly beside her. Shown in the background are Mount Fuji, the Tokyo Tower and various other buildings.

Doves, irises and a cauldron with the Olympic flame are featured on the €1.80 stamp in the souvenir sheet for the post office at the Vienna International Center.

Cartor Security Printer printed the stamps and souvenir sheets by hexachrome, according to the UNPA. The souvenir sheets measure 114 millimeters by 70mm each, and the panes of eight are 196mm by 127mm. The stamps are 35mm by 35mm.