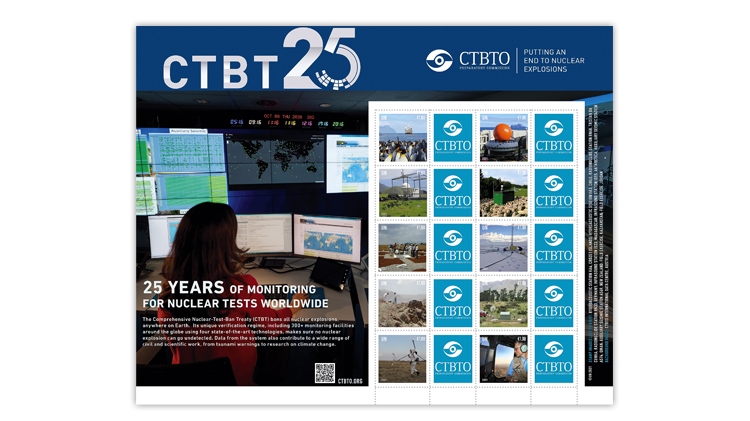 The United Nations Postal Administration marks the 25th anniversary of the Comprehensive Nuclear Test Ban Treaty on a pane of 10 €1 stamps and se-tenant labels being issued Aug. 27.

The stamps are for use from the U.N. post office at the Vienna International Center in Vienna, Austria. The Comprehensive Nuclear Test Ban Treaty Organization is headquartered in Vienna.

The purpose of the treaty is to ban “nuclear explosions by everyone, everywhere: on the Earth’s surface, in the atmosphere, underwater and underground,” according to the Comprehensive Nuclear Test Ban Treaty Organization.

A fact sheet about the treaty states that it “is almost universal but has yet to become law.”

The fact sheet further states that “44 specific nuclear technology holder countries must sign and ratify before the CTBT can enter into force. Of these, eight are still missing: China, Egypt, India, Iran, Israel, North Korea, Pakistan and the USA. India, North Korea and Pakistan have yet to sign the CTBT. The most recent nuclear technology holder country to ratify the Treaty was Indonesia on 6 February 2012.”

The 10 stamps in the pane focus on the International Monitoring System established by the Comprehensive Nuclear Test Ban Treaty Organization.

According to text in the selvage of the pane under the heading “25 YEARS Of Monitoring For Nuclear Testing Worldwide,” this system of more than 300 facilities around the globe uses four state-of-the-art technologies to make sure that “no nuclear explosion can go undetected. Data from the system also contribute to a wide range of civil and scientific work, from tsunami warnings to research on climate change.”

The first stamp in the upper left of the pane shows penguins and Hydroacoustic Station HA4 in the Crozet Islands, part of French Southern and Antarctic Territories.

The stamp in the upper right features Hydroacoustic Station HA3 in Chile.

The stamps in the second row show photographs of radionuclide stations: RN68 in Tristan da Cunha on the left and RN33 in Germany on the right.

Depicted in the third row are two infrasound stations: IS33 in Madagascar on the left and IS55 in Antarctica on the right.

The auxiliary seismic stations shown in the fourth row of stamps are AS74 in Oman on the left and AS69 in New Zealand on the right.

The stamps in the last row picture field exercises in Kazakhstan and Jordan on the left and right, respectively.

The photo in the selvage was taken at the organization’s International Data Center in Austria.

The 10 labels in the pane feature the logo of the Comprehensive Nuclear Test Ban Treaty Organization. The logo also is shown in the selvage above the stamps. In the preliminary image of the pane provided by UNPA, a QR code (a bar code that can be read by smartphones and tablets) followed by “CNTBTO.org” is included at the bottom of the pane to the left of stamps.