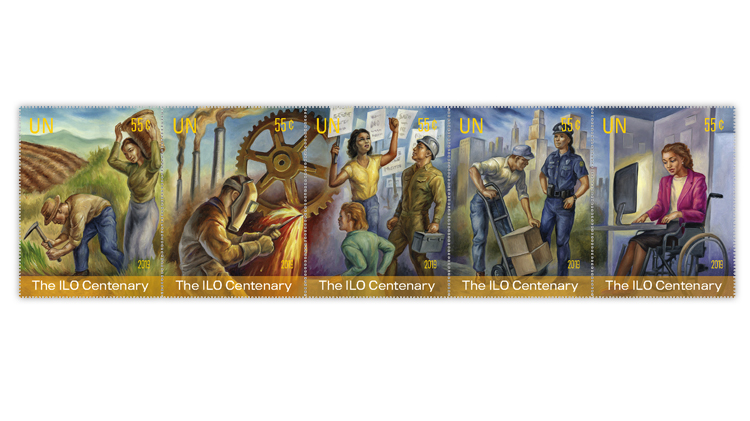 The United Nations Postal Administration celebrates the 100th anniversary of the International Labor Organization on stamps to be issued June 24. The strips of five se-tenant stamps for use from the post office at U.N. headquarters in New York City shows 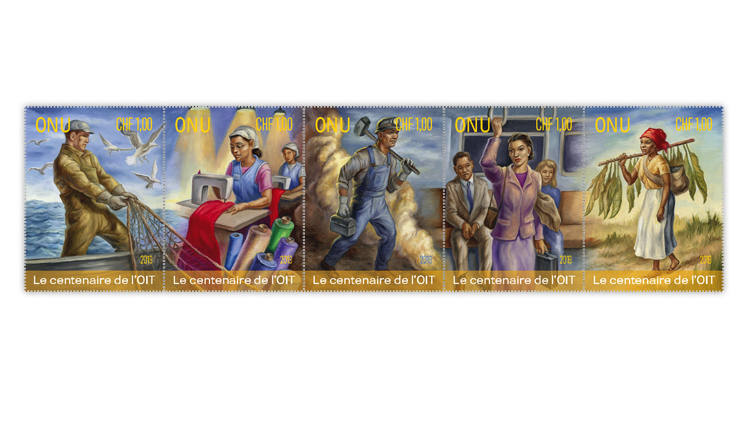 Owen Smith, an American artist known for his magazine covers and murals, also created illustrations of workers for the stamps for use from the U.N. post office in Geneva, Switzerland. 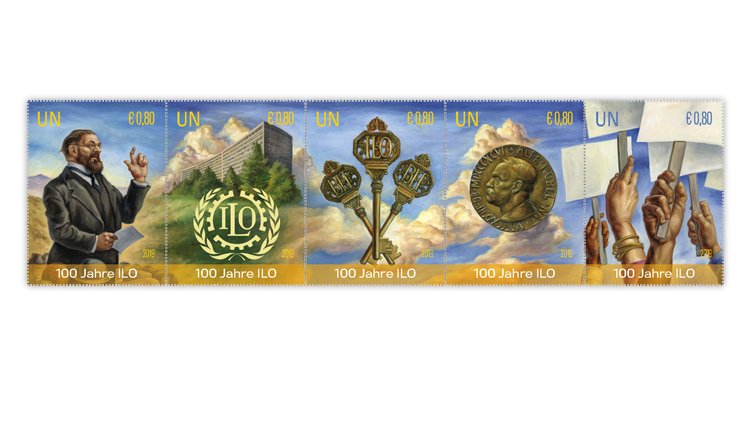 The five stamps for use from the U.N. post office in Vienna, Austria, show images related to the International Labor Organization and its history.
Previous
Next

The United Nations Postal Administration will commemorate the 100th anniversary of the International Labor Organization on 15 stamps to be issued June 24.

The ILO was founded in 1919 “in the wake of a destructive war, to pursue a vision based on the premise that universal, lasting peace can be established only if it is based on social justice,” according to information on the organization’s website (www.ilo.org).

In 1946, the ILO became the first specialized agency of the United Nations. It also is the only tripartite U.N. agency.

“Its unique structure gives an equal voice to workers, employers and governments providing a platform for promoting decent work for all women and men,” the new-issue announcement from UNPA said.

The stamps for the ILO’s centennial are in three se-tenant (side-by-side) strips of five, printed in sheets of 20.

All of the stamps feature illustrations by American artist Owen Smith with labor themes.

Smith said: “I have long been interested in art that focuses on the common aspirations and the struggles of ordinary people. I am influenced by the murals created during the Great Depression that depict the dignity of labor. The International Labour Organization advocates for social justice and work standards worldwide. These stamps celebrate the remarkable history and accomplishments of the ILO.”

Smith’s distinctive artwork, which is described as capturing “the drama of life with a dark twist,” has been displayed on numerous magazine covers, in books, in exhibits, and on murals in a New York City subway station and other locations.

His illustrations for the 55¢ and 1fr stamps picture a variety of workers, including farm laborers, a welder, a fisherman and garment workers. Images of office workers riding in a subway car and a labor strike also are shown.

While one design in the 0.80 strip also appears to show a labor strike, the other four stamp designs focus on the ILO and its history.

For example, one stamp shows the Nobel Peace Prize, which the ILO received in 1969. The organization’s headquarters in Geneva also is pictured on a stamp, and three symbolic keys representing the ILO’s tripartitism are illustrated on another. Albert Thomas is featured on the first stamp in the strip. Born in 1878 in France, he served as the first director general of the ILO until his death in 1932.

Joh. Enschede of the Netherlands printed the stamps by offset lithography. Each stamp measures 30 millimeters by 40mm and is perforated gauge 14 by 13.25.

A souvenir card pictures the new stamps and carries a statement by Antonio Guterres, secretary-general of the United Nations, and Guy Ryder, director general of the ILO.

The souvenir card is available in either mint or canceled condition, and a quantity of 6,000 cards was printed.