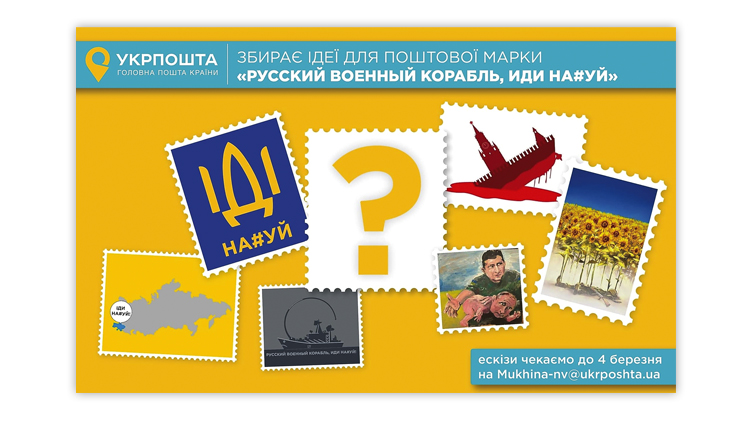 Less than a week after Russia invaded Ukraine on Feb. 24, the country’s post office, Ukrposhta, is planning to issue a stamp to illustrate “Ukrainians’ determination to defend their land,” and is asking the public to send in their designs.

According to Ukrposhta’s March 1 press release, the stamp-design contest was to be open only until March 4.

As translated from Ukrainian, the press release begins: “On March 1, on the 30th anniversary of the modern Ukrainian stamp, Ukrposhta announced the All-Ukrainian People’s Competition for the development of a sketch of the postage stamp ‘Russian military ship, go to #uy!.’ Ukrposhta will publish a sketch that will win the popular vote in a special edition in the near future.”

Ukrposhta encouraged both professional illustrators and amateurs to participate, drawing their sketches “and thus relieve the psychological stress of war.”

Ukrainians will submit their sketches by email, and they will be displayed on Ukrposhta’s Facebook page for the public to vote on, according to the press release.

The illustration receiving the most votes “will be published by Ukrposhta in mass circulation on the first Ukrainian postage stamp under martial law,” the press release said.

Ukrposhta CEO Igor Smilyansky also said that the stamp will be valid for international mail.

In addition to the press release, Ukrposhta publicized the contest on its Facebook page with the illustration shown here.