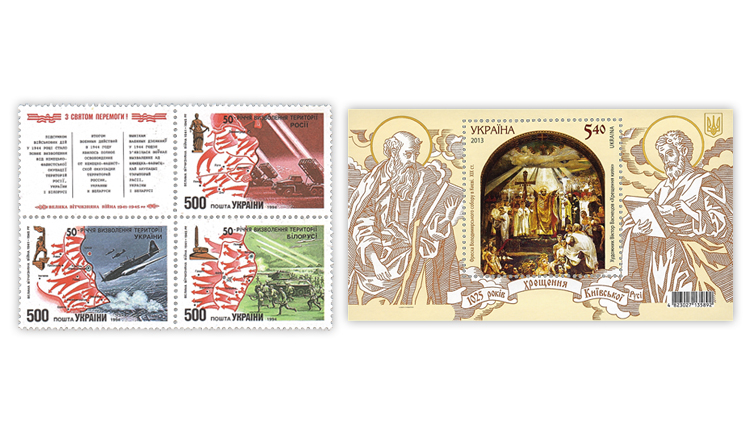 Ukraine’s post office, Ukrposhta, has said it has withdrawn from sale and destroyed two joint issues between Ukraine, Russia and Belarus: a 1994 joint issue marking the 50th anniversary of the liberation of Soviet areas during World War II and a 2013 join

Ukraine’s post office, Ukrposhta, has asked the Universal Postal Union and its members to impose philatelic sanctions against Russia related to joint issues, according to a March 18 press release on the Ukrposhta website.

The UPU describes itself as the “United Nations specialized agency and the postal sector’s primary forum for international cooperation.”

The two joint issues specifically mentioned were each between three postal administrations: Ukraine, Russia and Belarus. These three countries are among the 192 member nations of the UPU.

In a letter to the UPU that was quoted in the press release, Ukrposhta said that it had withdrawn from sale and had destroyed these two joint issues: the 1994 joint issue commemorating the 50th anniversary of the liberation of Soviet areas during World War II (Ukraine Scott 195, Russia 6213, Belarus 78) and the 2013 joint issue marking the 1,025th anniversary of the Christianization of Russia (Ukraine 930, Russia 7466, Belarus 870).

In the letter to the UPU, Ukrposhta asked the UPU “to apply sanctions to the Russian Post in order to limit propaganda through philately” and requested the removal of the two aforementioned joint issues from the worldwide numbering system for postage stamps created by the UPU and the World Association for the Development of Philately.

Known as the WADP numbering system, it includes an online database of postage stamps issued since 2002.

As of March 23, the souvenir sheets of the 2013 joint issue were still listed in the WADP database. As the database only lists stamps from 2002 onward, the 1994 joint issue was not included.

In the letter to the UPU, Ukrposhta also asked for the immediate re-election of the head of the WADP “because such a representative post cannot be headed by a representative of a terrorist country.”

The name of the head of the WADP was not listed in the letter or on the WADP website, and as of March 23, the UPU had not replied to Linn’s request asking to whom the letter referred.

At the end of the press release, Ukrposhta called for other UPU members “to be in solidarity with Ukraine and not to produce any joint stamp issues with Russian Post.”

It also invited “all UPU member countries to dedicate one its issues to Ukraine and its heroic struggle for its country,” as well as to participate in future joint issues with Ukraine “as a part of the big Europe, which defends peace and European values by its struggle.”

Ukrposhta also recently announced the postponement of Ukraine’s national stamp exhibition, Ukrfilexp 2022, which had been scheduled for May 25-29.

In that March 21 announcement, Ukrposhta said, “New dates for the exhibition will be determined by Ukrposhta together with the Association of Philatelists of Ukraine after the abolition of martial law in Ukraine.”