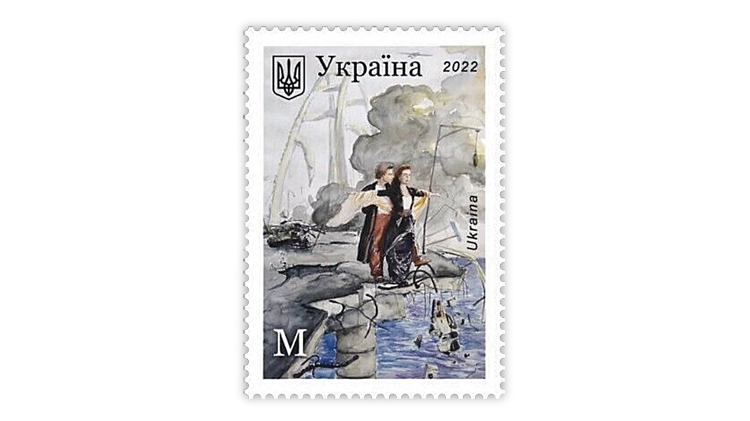 Ukraine will issue this postage stamp in early November to mark the Oct. 8 explosion on the bridge that links Crimea with Russia.

An Oct. 8 explosion rocked the 12-mile bridge that connects Kerch, Crimea, to Taman, Russia. Russia used the bridge as a supply route for its Russia-Ukraine war that began in February.

Ukraine’s post office, Ukrposhta, continues to use philately to needle Russia and bolster nationalism in Ukraine.

In April, Ukrposhta issued a defiant “Russian warship go f--- yourself” stamp to illustrate the response of the Ukrainian defenders of Snake Island. After the Russian warship Moskva sank on April 14, a follow-up stamp was issued in May.

Ukrposhta announced its latest stamp quickly. On the day of the bridge explosion, Ukrposhta took to its Facebook page to say, “The day has come: we announce the brand with the bridge,” and unveil a pane of seven stamps with two labels.

The “Crimean Bridge - Done” stamp design by Ukrainian artist Yuri Shapoval shows the bridge explosion (not exactly how it took place) and the main characters from a famous scene in the 1997 film Titanic.

There are a few parallels between the stamp design and the movie. Ukrposhta’s CEO Igor Smelyansky said that the “Titanic efforts by our people and our armed forces” are depicted through this stamp.