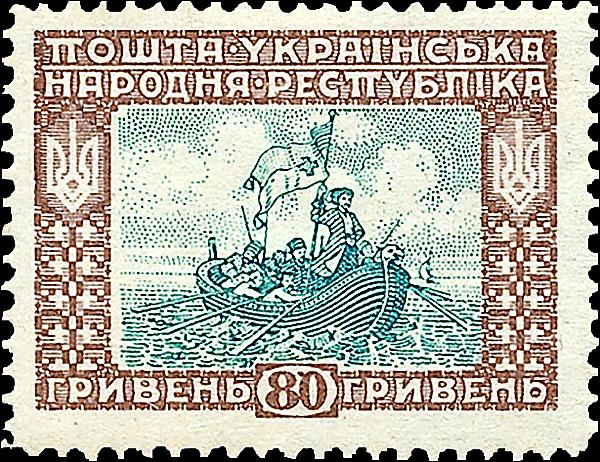 Figure 8. The 80-heller stamp is from a set of 14 lithographed stamps that was prepared in 1920 for Ukraine but never placed into use. 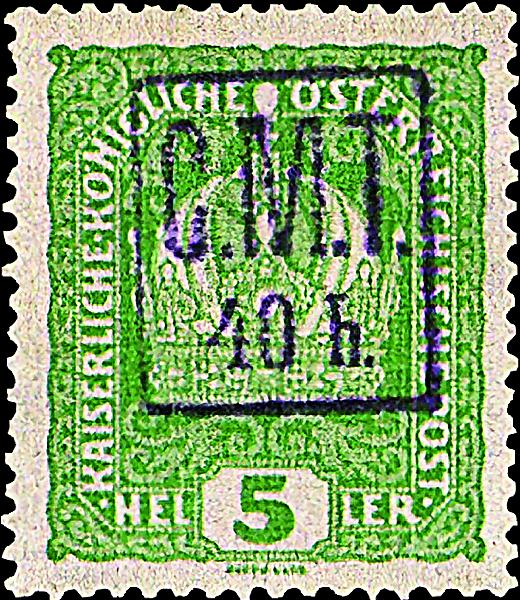 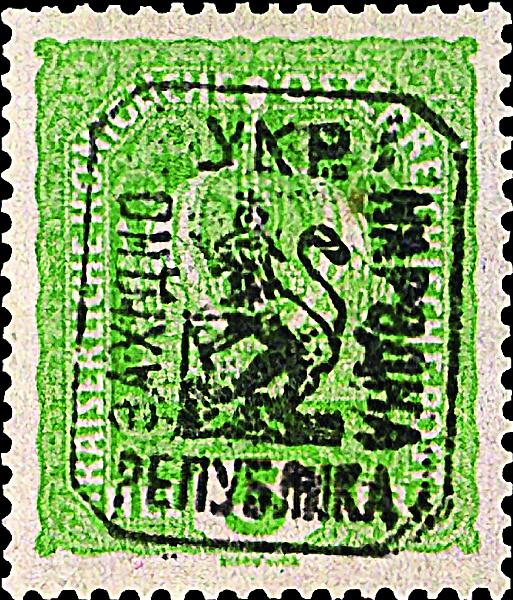 Figure 6. The 5-heller light green stamp (Scott 2) from the Lviv issue set of Western Ukraine. The Austria issue was handstamped with an octagonal overprint. 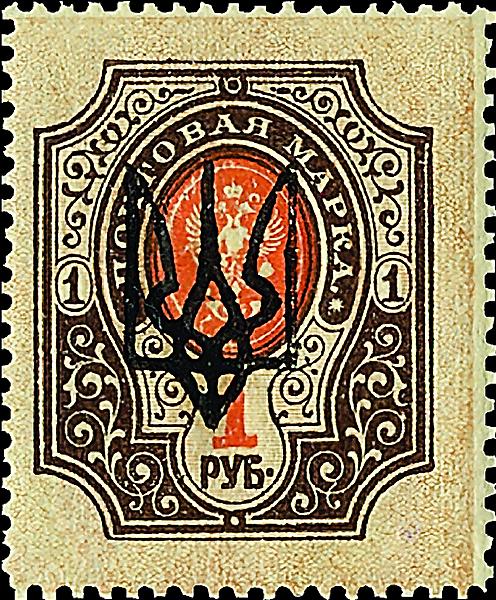 Figure 5. The Kharkiv III Trident overprint was handstamped in black with a metal device on a 1-ruble stamp (Scott 22d). 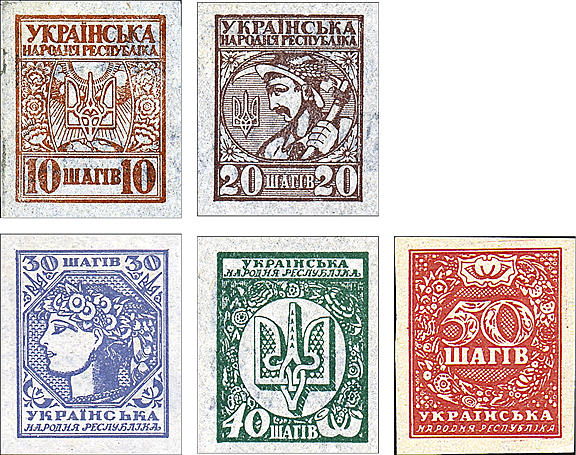 Figure 4. Ukraine’s first set of stamps feature designs that were used in April 1918 as money tokens printed on cardboard. 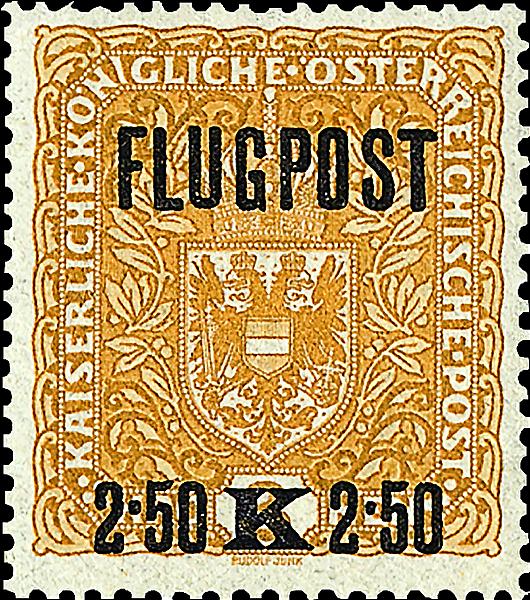 Figure 3. This 2.50-kreuzer-on-3kr stamp is one of three stamps overprinted by Austria in 1918 for airmail use. 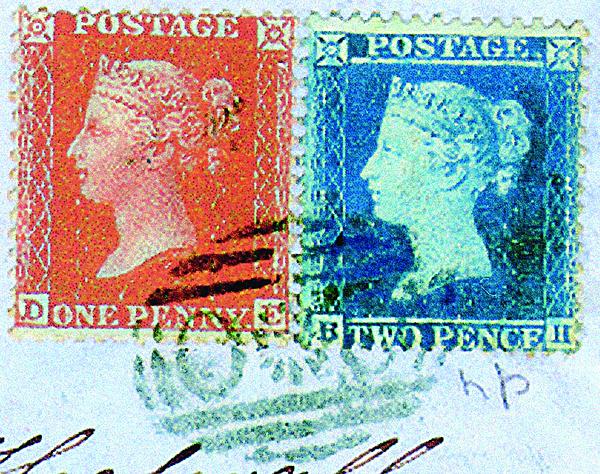 Figure 2. The Great Britain 1-penny red and 2d blue stamps are tied to a cover by a “0*0” cancellation, indicating use in Crimea. The cover has been digitally cropped. Courtesy The Classic Collector, www.sismondostamps.com. 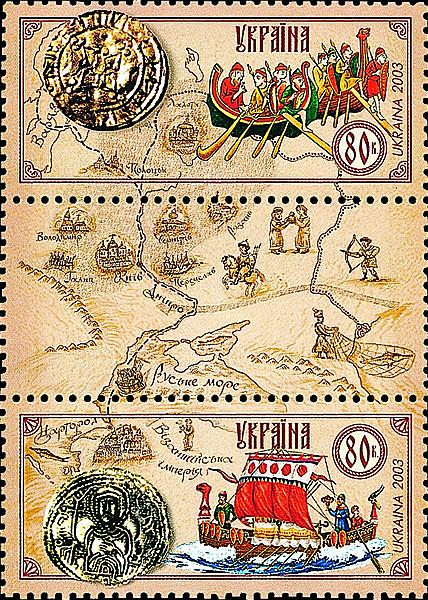 Figure 1. This pair of 80k stamps with a label features ancient trade routes developed in the Middle Ages. 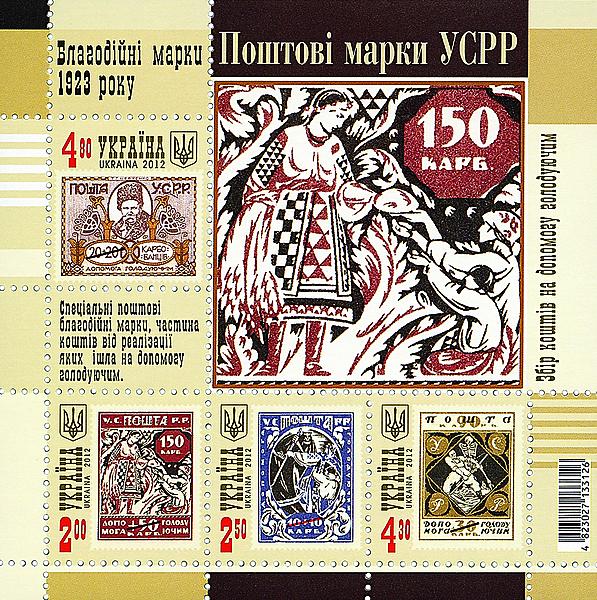 Figure 14. Ukraine issued this miniature sheet of four stamps in 2012 to commemorate the 89th anniversary of the Ukrainian Soviet Socialist Republic. The stamp-on-stamp design features semipostal stamps of 1923.

Figure 13. A pair of 1.40h stamps were issued by Ukraine in 1999 as a joint issue with Poland to promote nature conservation. 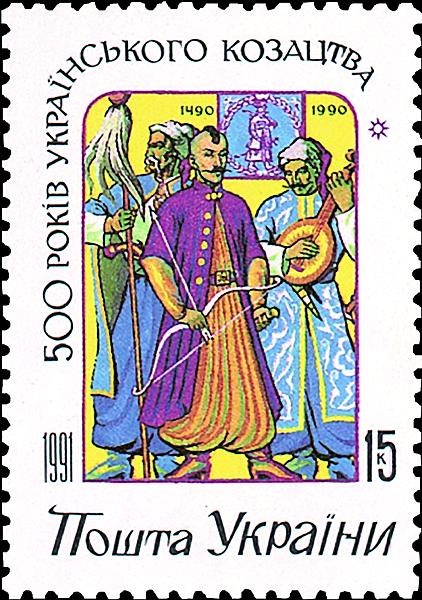 Figure 12. The Cossacks of Ukraine are featured on this stamp, one of two 15k stamps to be issued by the modern state of Ukraine in March 1992. 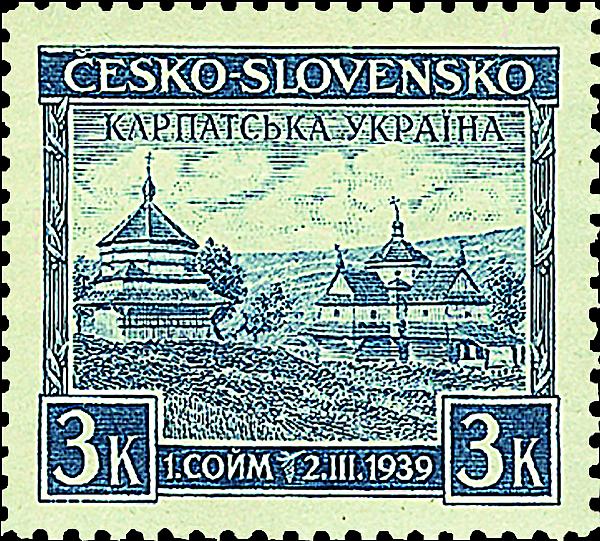 Figure 11. This 3-koruna stamp was issued in 1939 to commemorate the inauguration of the Carpatho-Ukraine Diet. The stamp pictures a view of the city of Jasina.

Figure 10. Two designs were used for the set of South Russia stamps known as the Deniken issue. The inscription on the stamps translates as “White Russia.” 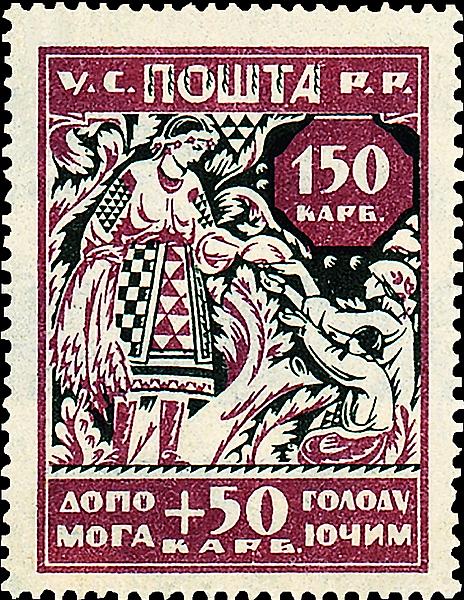 Figure 9. ‘Ukraine’ Distributing Food is the theme of this 150k+50k stamp that is included in a 1923 set of semipostal stamps issued to raise money for flood relief. 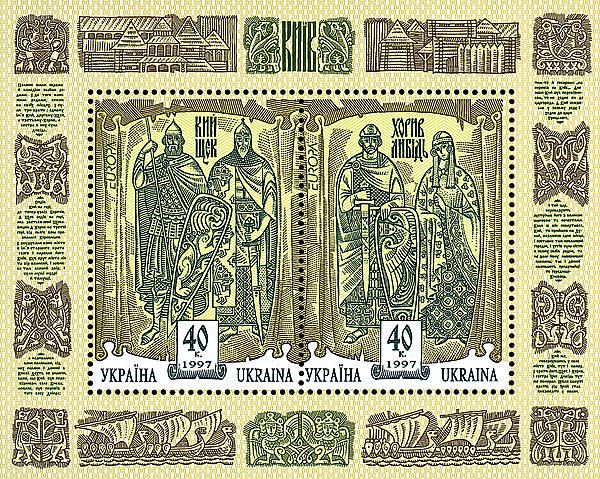 Ukraine issued this souvenir sheet of two 40-kopiyok stamps in 1997 honoring the four legendary founders of Kyiv: Kyi, Shchek, Khoryv and Lybid. The country name on these stamps is written in both Cyrillic and Latin scripts.

Recent events in Ukraine, including Russia’s attempt to take over Crimea, have thrust the country into the world’s awareness.

Like any other nation, Ukraine’s history and geography are reflected in its stamps and postal history. Though such artifacts may not paint a complete or even an objective picture, they do illuminate key moments in a tangibly human way.

Collectors wishing to build a narrative of Ukraine’s often turbulent past can do so with both contemporaneous historic items and modern stamps, issued since Ukraine became independent in 1991 on the breakup of the Soviet Union, commemorating Ukraine’s rich cultural heritage.

For better or for worse, Ukraine’s history and geography are tightly intertwined with Russia’s. The story begins some 1,200 years ago with the first Russian nation-state, which was based in Kiev, now the Ukrainian capital of Kyiv.

A souvenir sheet of two 40-kopiyok stamps (Ukraine Scott 264), shown on page 1, was issued in 1997 honoring the four legendary founders of Kyiv: Kyi, Shchek, Khoryv and Lybid. As with many post-Soviet republics, the country name on these stamps is written in both Cyrillic and Latin scripts.

The great waterway connecting the Baltic to the Black Sea made the Viking invasions possible, but also formed the backbone for a network of post roads that developed in the Middle Ages. The 2003 pair of 80k stamps with a label between (Scott 524), shown in Figure 1, features this ancient route.

There is evidence of an organized postal system in Russia and Ukraine as far back as the 11th century, much earlier than in Western Europe. Ancient letters written on birch bark survive today in museums.

Sadly, though, the first 100 years of Ukrainian philately reveal more about its wars, revolutions and invasions than its cultural patrimony. Ukraine’s borders and regimes shifted like shadows in the ancient forests, and this is easily seen in its early stamps.

Although Ukraine was not yet on the map, the first postage stamps appeared in its territory in the mid-19th century: 1850 for the western region that lay within the Austro-Hungarian Empire, and 1858 for the areas ruled by Russia. Stamps and postal cards of Austria or Russia postmarked with legible Ukrainian town names are collected as forerunners of Ukraine’s own issues.

Occupying powers also would begin to leave their mark. From 1853 to 1856, Russia fought a war in Crimea against the Ottoman Empire and its allies Britain, France and Sardinia. British soldiers sent letters home from Crimea franked with British stamps, postmarked with special field markings including a “0*0” cancellation (also known as the star and cyphers or 0X0 cancellation) in place of a town name or numeral. An example of this cancellation is shown in Figure 2. The Great Britain 1-penny red and 2d blue stamps are tied to a cover that has been digitally cropped to show the cancellation.

In 1864, Czar Alexander II reorganized rural Russia and Ukraine into local councils. Each council, or zemstvo, was given the authority to issue its own postage stamps. According to the website of the Ukrainian Philatelic and Numismatic Society (upns.org), some 39 zemstvos in what is now Ukraine issued almost 800 different stamps between 1866 and the abolition of the system in 1917.

In 1918, Ukrainian philately began to move faster — literally. The advent of the airplane meant the forested and mountainous territory between Austria and points east could be crossed with much greater ease.

The world’s first regular international airmail service was inaugurated in March 1918 between Vienna, Krakow and Lviv (then known by its German name, Lemberg). Three Austrian stamps (Austria Scott C1-C3) were reissued in new colors and overprinted “Flugpost” to carry mail on this service. The 2.50-kreuzer-on-3kr airmail stamp is shown in Figure 3.

The route would be extended to Budapest, Odessa and Kiev before the defeat of Austria-Hungary in World War I later that year led to the collapse of the service.

As the war drew to an end, Ukrainian nationalists and emigres began agitating for independence. This movement, together with the attacks and counterattacks of the Austrian, German, Polish, Bolshevik and White Russian and Allied armies, would make for a chaotic period.

In Kiev, a Ukrainian National Republic was declared in 1918. Five designs by Heorhiy Narbut, an artist and the head of the Ukrainian Academy of Arts in Kiev, were issued first as cardboard tokens to be used in place of coinage, and then on thin paper to be used for postage (Ukraine Scott 1-5). Figure 4 shows this set of imperforate stamps.

One of the designs would be adapted in 1992 for definitive stamps of post-Soviet Ukraine.

The distinctive Ukrainian trident symbol was handstamped locally on remaining Russian stamps, with numerous regional varieties. These are listed as Ukraine Scott 6-47, with different suffix letters for each region. Many of the scarcer varieties have been widely forged. Figure 5 shows the Kharkiv III Trident overprint handstamped in black on a 1-ruble stamp (Scott 22d).

Meanwhile, in the Austrian province of Galicia, the Western Ukrainian National Republic was set up. Its first postage, consisting of handstamps on Austrian issues (Western Ukraine Scott 1-4A), was in use for only two days before Polish armed forces overran Lviv. The 5-heller light green stamp (Scott 2) is shown in Figure 6.

The towns of Stanislaviv and Kolomyia issued their own Western Ukraine overprints on Austrian stamps in subsequent months, but in the summer of 1919, Romania would occupy the latter town and overprint a dozen or so Austrian stamps with a boxed “C.M.T.,” Romanian for Territorial Military Command (Scott N1-N12), an example of which is shown in Figure 7.

After that occupation ended, the C.M.T. handstamp fell into the hands of forgers, who used it on many additional stamps with no postal validity.

An attractive set of 14 pictorial definitives was prepared for Ukraine around 1920, but never issued. Nevertheless, they are plentiful and have found their way into many collectors’ albums. Though not listed in the Scott Standard Postage Stamp Catalogue, they are illustrated in a footnote after Ukraine Scott 87. The 80h from this set is shown in Figure 8.

In 1919, a Ukrainian Soviet Socialist Republic was declared in the eastern city of Kharkiv. It issued just four stamps, hauntingly beautiful semipostal designs, to raise money for flood relief (Ukraine Scott B1-B4). Figure 9 shows the 150k+50k stamp from this set issued in 1923.

The White Russian forces battling the Bolsheviks made southern Russia their stronghold, and Ukraine was the scene of many battles. A provisional government was set up by Gen. Anton I. Den­ikin, later led by Gen. Pyotr N. Wrangel, and a number of provisional overprints on Russian stamps were issued throughout the area of fighting, including Crimea.

Original designs inscribed “United Russia” were issued later in 1919 (South Russia Scott 61-71). Two stamps from this set, known as the Deniken issue, are shown in Figure 10. The White Russians were defeated, and fled from Crimea in 1920.

After years of civil war, the Communists finally took over, and in 1923 much of Ukraine was incorporated into the Union of Soviet Socialist Republics. A “Peoples of the Soviet Union” set issued in 1933 shows Ukrainian farmers on one of the 15-kopek stamps (Russia Scott 504). Numerous subsequent Soviet stamps would have a Ukrainian theme.

Western areas of Ukraine, including Lviv (known in Polish as Lwow), remained part of Poland. The province of Carpathian Ukraine was appended to Czechoslovakia by the Treaty of Versailles, because the Czechs offered the local Ruthenian population the greatest degree of autonomy.

All too soon, however, war loomed again. In 1939, Hitler broke up Czechoslovakia, and Carpathian Ukraine was briefly cast free, issuing a single stamp marking the inauguration of its own legislature (Czechoslovakia Scott 254B). The 3-koruna stamp is shown in Figure 11.

In 1941, as the armies of Nazi Germany plowed east on their way to Stalingrad, a set of 18 Hitler-head definitives were overprinted “Ukraine” for use in the area (Scott N29-34, N37-48). These remained in use until 1943, when the German army retreated and Soviet control was reasserted.

As the Soviets pushed back, their leader Joseph Stalin went further, seeking to add lands that Russia had failed to gain after the first World War. After the war, Ukraine was substantially enlarged, adding great swaths of formerly Polish, Czechoslovak and Romanian territory.

With the Soviet Union about to collapse, Ukraine declared itself independent Aug. 24, 1991, a step that was ratified by a referendum and the formal dissolution of the USSR that December.

In the early post-Soviet months, Ukrainian postmasters had to improvise postage. Some hastily printed crude labels, while others overprinted the Ukrainian trident symbol upon leftover Soviet stamps. Experts are still trying to establish the postal validity of all the local varieties.

Ukraine issued its first stamps as a modern state in March 1992, with a 15k pair honoring the 500th anniversary of the Cossacks of Ukraine and Ukrainian emigration to Canada (Scott 100-101). The Cossacks stamp can be seen in Figure 12.

In the almost quarter century since independence, Ukraine has issued hundreds of colorful and well-produced stamps commemorating its diverse culture and natural beauty.

A 1999 joint issue with Poland showcased wildlife conservation on a pair of 1.40h stamps (Scott 354), pictured here as Figure 13.

Crimea, as an autonomous republic within Ukraine, is shown on a 30k stamp issued in 2000 (Scott 397) from an ongoing series celebrating all the regions of the country.