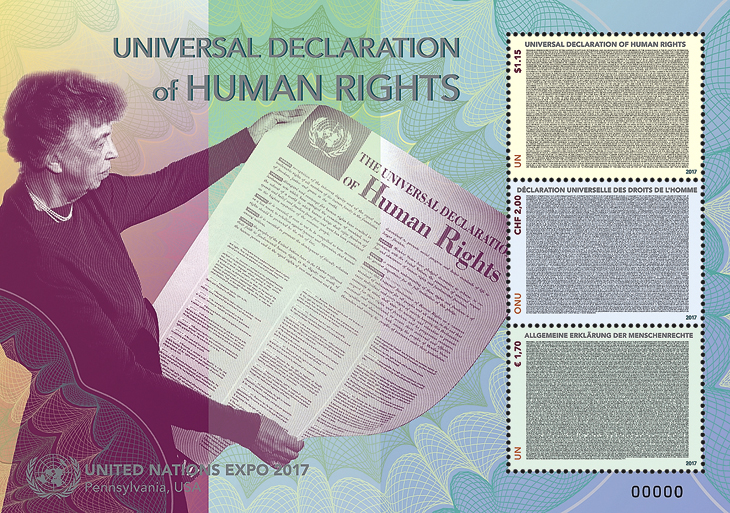 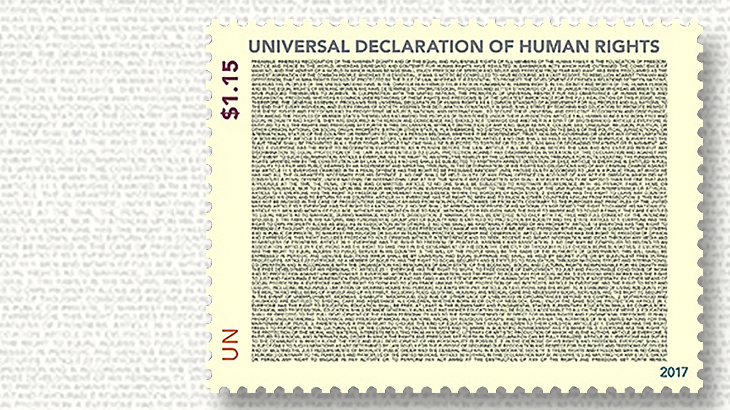 The United Nations Postal Administration issued a souvenir sheet of three stamps featuring microprinting of the text of the Universal Declaration of Human Rights and its preamble in three different languages. The declaration is in English on the $1.15 sta 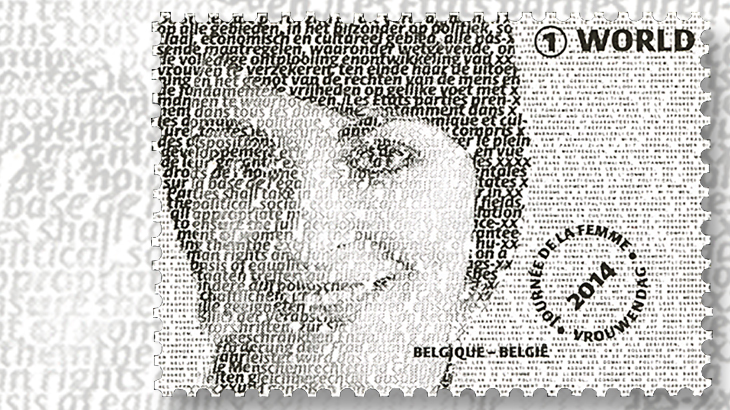 On Belgium’s International Women’s Day commemorative issued in March 2014, the woman’s face is formed by 606 words in four languages taken from the Convention on the Elimination of All Forms of Discrimination against Women. 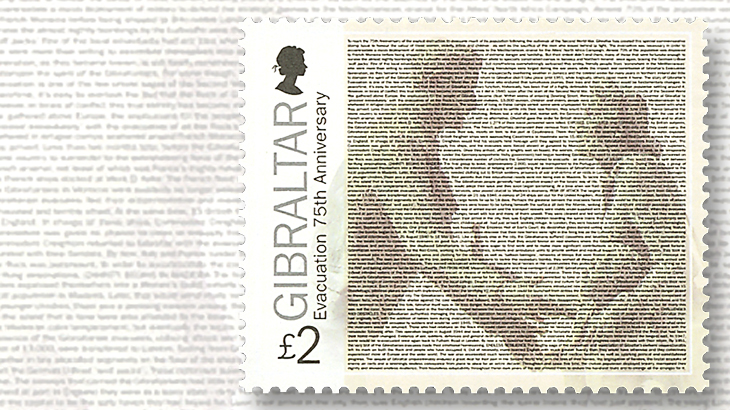 In September 2014, Gibraltar issued a stamp with 2,183 legibile words in the design. This £2 stamp commemorates the 75th anniversary of beginning of the evacuation of Gibraltar during World War II.
Previous
Next

A new souvenir sheet from the United Nations Postal Administration includes the full text of the Universal Declaration of Human Rights and its preamble in English, German and French.

These 5,400 words are microprinted on three stamps: a $1.15 stamp for use from the U.N. post office at U.N. headquarters in New York City; 2 francs for the Palais des Nations in Geneva, Switzerland; and 1.70 for the Vienna International Center in Vienna, Austria.

The souvenir sheet was issued Oct. 27, the first day of the two-day UN Expo 17, a World Series of Philately exhibition and stamp show devoted to United Nations philately, held Oct. 27-28 at Sundman Hall in the American Philatelic Center at 100 Match Factory Place in Bellefonte, Pa.

The sheet commemorates the Universal Declaration of Human Rights translation passing the 500th mark. Considered the world’s most translated document, it has been translated into 501 languages as of November 2016.

I wanted to know how many words were microprinted on the three stamps in the new souvenir sheet, so I asked the U.N. Postal Administration.

Malli Hui of UNPA replied by email with the following figures.

The online listing at www.guinnessworldrecords.com/world-records/most-words-on-a-postage-stamp reads: “The most words on a postage stamp is 606 words in four languages taken from the Convention on the Elimination of All Forms of Discrimination against Women (CEDAW). The stamp was issued by bpost (Belgian Post Group) to mark International Women’s Day 2014. The stamp depicts the face of a woman made exclusively from words. Only full words counted towards the total.”

Only a half year later, Gibraltar Post proclaimed a “new philatelic world record” for the “most words on a postage stamp.”

This £2 stamp (Scott 1474) has 2,183 legible words, according to Gibraltar Post. The design also includes figures from the Gibraltar evacuees memorial sculpture.

The stamp was issued Sept. 10, 2014, and is the high denomination of a set of five commemorating the 75th anniversary of the beginning of the mass evacuation of Gibraltar during World War II.

In announcing this set of stamps, Gibraltar Post said: “During the Second World War there was a fear that if Nazi Germany and its allies took Gibraltar and the strait, there would have been catastrophic consequences … And to accommodate the influx of military personnel required to reinforce the Rock, it was decided that 16,000 civilians who were not deemed essential to its defence, should be evacuated.”

In my reply email to Hui, I strongly suggested that the UNPA apply for a new Guinness world record for this Universal Declaration of Human Rights souvenir sheet. Hui told me that the UNPA is moving forward with this.

She added, “This is a fun fact no matter what happens.”

Joh. Enschede of the Netherlands printed it by offset, also using silver foil and a microprinting technique for the tiny text on each stamp.

The image in the selvage of the sheet is based on a photograph of Eleanor Roosevelt taken Nov. 1, 1949, during her visit to U.N. headquarters in Lake Success, N.Y.

Eleanor Roosevelt chaired the committee to draft the Universal Declaration of Human Rights.

On the website www.un.org, the United Nations said: “The Universal Declaration of Human Rights (UDHR) is a milestone document in the history of human rights. Drafted by representatives with different legal and cultural backgrounds from all regions of the world, the Declaration was proclaimed by the United Nations General Assembly in Paris on 10 December 1948 (General Assembly resolution 217 A) as a common standard of achievements for all peoples and all nations. It sets out, for the first time, fundamental human rights to be universally protected and it has been translated into over 500 languages.”