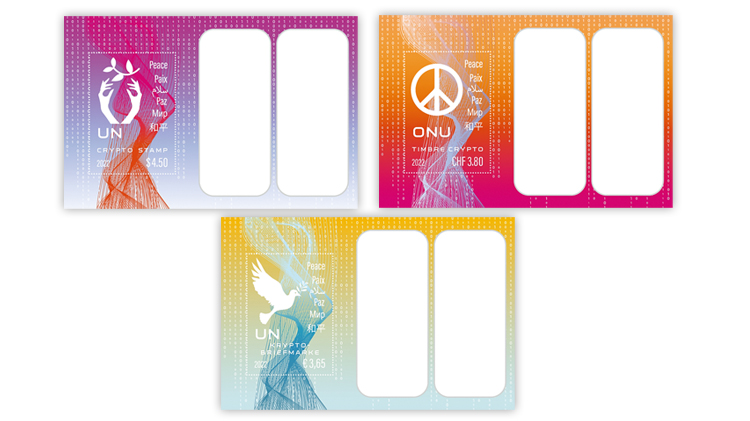 Each new Crypto souvenir sheet contains a single stamp featuring a symbol of peace and the word “peace” in the six official languages of the United Nations.

The UNPA will host a first-day ceremony for its second set of Crypto souvenir sheets at noon Friday, Nov. 18, at the Chicagopex show. The show will be held Nov. 18-20 at the Westin Chicago Northwest, 400 Park Blvd., Itasca, Ill.

The website for the sheets says that they connect “a new generation of United Nations stamps with the blockchain.”

The Merriam-Webster online dictionary defines blockchain as “a digital database containing information (such as records of financial transactions) that can be simultaneously used and shared within a large decentralized, publicly accessible network.”

Each new Crypto souvenir sheet contains a single stamp featuring a symbol of peace and the word “peace” in the six official languages of the United Nations (English, French, Arabic, Spanish, Russian and Chinese).

For example, the $4.50 stamp issued for the U.N. post office in New York City features an olive branch above two hands, with the six translations of “peace” listed to the right.

Underneath the image of the olive branch are the initials “UN,” with “Crypto Stamp” below that, and the “2022” year date and denomination at the bottom.

The 3.80-franc stamp issued for the U.N. post office in Geneva shows the symbol known internationally as the peace sign and alternately as the nuclear disarmament symbol. The inscriptions are in French.

A dove holding an olive branch appears above German inscriptions on the €3.65 stamp issued for the U.N. post office in Vienna.

The Crypto souvenir sheets were developed in conjunction with the U.N. Office of Information and Communications Technology, according to the UNPA.

Sergio Baradat of the United Nations designed the sheets. Each sheet measures 84 millimeters by 55mm, and the stamps are 25mm by 35mm. Joh. Enschede of the Netherlands printed 30,000 examples of each sheet. The UNPA described the printing processes used as “hexachrome” and “foil.”

According to the aforementioned website, each sheet includes a secret code hidden behind a scratch-off panel that “enables its owner to activate exactly one counterpart of that stamp on the blockchain as a digital collectible.”

“The creation, ownership, exchange and trading of the digital stamps is managed through a smart contract deployed on the Ethereum blockchain,” the website added.

The UNPA said that seven variations of the peace design, including a limited-edition variation, can be obtained when the digital stamps are claimed.