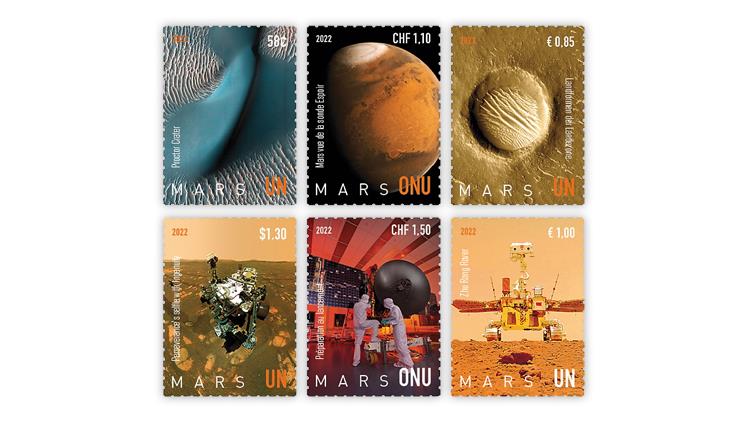 On April 24, the United Nations Postal Administration issued a set of six stamps and three souvenir sheets celebrating the recent achievements of three countries in the exploration on and around Mars. The designs show images of the planet and the equipmen 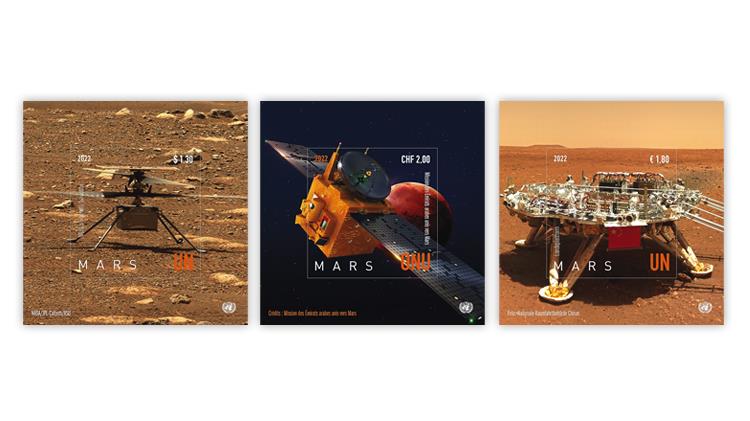 Three recent missions to destinations on and around Mars have marked a historic period of exploration of the Red Planet. A United Nations Postal Administration April 24 issue celebrates these achievements.

“As an inseparable celestial companion of Earth, Mars has been a source of curiosity for mankind since time immemorial,” the UNPA said in a press release. “The space community has long strived to uncover the mysteries of Mars and has taken exceptional steps forward in 2021.”

The stamps for use from the post office at U.N. headquarters in New York City feature the Proctor Crater of Mars on the 58¢ denomination and the Mars 2020 Perseverance Rover on the $1.30 stamp. The souvenir sheet, also denominated $1.30, shows the Mars 2020 Ingenuity Helicopter.

The image of the Proctor Crater on the 58¢ stamp comes from a Feb. 9, 2009, picture taken by the High Resolution Imaging Science Experiment (HiRISE) camera on NASA’s Mars Reconnaissance Orbiter, according to NASA.

The Perseverance Rover and Ingenuity Helicopter landed on Mars Feb. 18, 2021, as part of the National Aeronautics and Space Administration (NASA) Mars 2020 mission. The objective of this mission, expected to last at least one year on Mars (or about 687 days on Earth), is to collect rock and soil samples while seeking signs of ancient life on the planet, according to the UNPA.

The stamps for use from the U.N. post office at the Palais des Nations in Geneva, Switzerland, show a picture of Mars on the 1.10-franc stamp, preparations to launch the Emirates Mars mission on the 1.50fr stamp, and the United Arab Emirates Hope Probe on the 2fr souvenir sheet.

The United Arab Emirates Hope Probe took the picture on the 1.10fr stamp. The probe, which just entered Martian orbit Feb. 9, 2022, is studying the atmosphere and climate of the planet, according to the UNPA.

“In Hope’s first year, the orbiter confirmed the existence of a discrete aurora, a highly localized atmospheric phenomenon on the night side of the planet, and took note of water-bearing clouds that grow and shrink daily,” the UNPA said.

The stamps for use from the post office at the Vienna International Center in Vienna, Austria, show elements from Tianwen-1, the first Mars mission for the China Nations Space Administration (CNSA).

The UNPA outlined important objectives for space exploration in its press release about the stamps: “As humankind races toward Mars, it is important that countries work together to promote international cooperation and peaceful use and exploration of space, and in the utilization of space science and technology for sustainable economic and social development.”

The UNPA previously issued stamps related to peace in outer space. In 2018, the UNPA honored UNISPACE+50, the 50th anniversary celebration of the first United Nations Conference on the Exploration and Peaceful Uses of Outer Space with a set of six stamps and three souvenir sheets (Scott New York 1196-1198, Geneva 653-655, Vienna 623-625).

The UNPA held a pre-launch ceremony for the stamps April 23 at the Westpex stamp show in San Francisco.