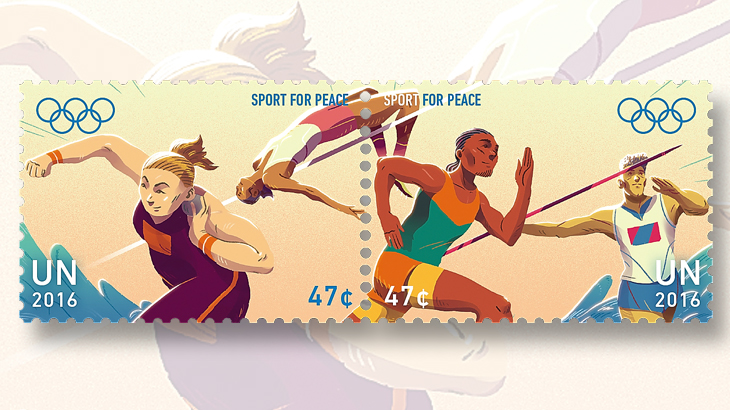 The United Nations Postal Administration is issuing a set of 12 Sport for Peace stamps July 22. The se-tenant pair of 47¢ stamps for use from the post office at U.N. headquarters in New York City depicts track and field athletes. 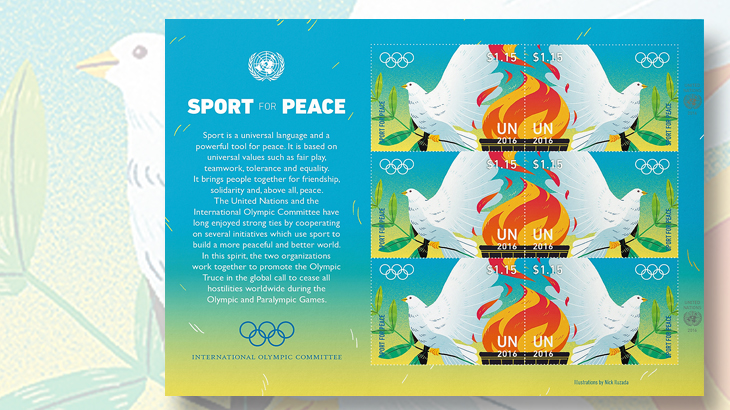 The new U.N. Sport for Peace stamps were issued in panes of six, containing three se-tenant pairs. Unlike the other stamps in the set, which show athletes, the $1.15 stamps feature a peace dove and the Olympic flame.
Previous
Next

A dozen new stamps from the United Nations Postal Administration feature the theme of Sport For Peace.

The July 22 issue date of the stamps was selected because it was exactly one week before the start of the Olympic truce period before the Summer Olympics in Rio de Janeiro, Brazil.

The truce begins July 29, seven days before the Aug. 5 opening of the Games, and lasts seven days after the close of the Paralympics on Sept. 18.

A press release from the Rio 2016 Olympic and Paralympic Games explained the origins of this truce: “The tradition of an Olympic Truce around ancient Games was vital, during times of almost constant war, to allow athletes to safely travel to the Greek city Olympia for the competitions. And it was from one of the darkest periods of recent history — the Yugoslav Wars of the 1990s — that the Olympic truce was re-born with the aim of helping find peaceful solutions to modern conflicts.”

In announcing the new stamps, the UNPA reports that it partnered with the International Olympic Committee and the U.N. Office on Sport for Development of Peace “to develop and issue these colourful stamps which feature several Olympic Sports.”

The International Olympic Committee, the supreme authority of the Olympic movement, was founded in 1894 by Pierre de Coubertin.

The U.N. Office on Sport for Development of Peace, which has its headquarters in Geneva, Switzerland, was established in 2011.

Sergio Baradat and Lindsey Thoeng of the United Nations designed the stamps using illustrations by Nick Iluzarda of the United States.

Iluzarda has created illustrations for ESPN and Runner’s World magazine, among numerous other clients.

The Sport for Peace set includes four stamps (two se-tenant pairs) for each of the three UNPA post offices located at U.N. headquarters in New York City; the Palais des Nations in Geneva; and the Vienna International Center in Vienna, Austria.

The two 47¢ stamps for use from U.N./New York show track and field athletes, including a shot putter, high jumper, runner, and javelin thrower.

The pair of $1.15 stamps features the Olympic flame and a peace dove with an olive branch.

A weightlifter is pictured across the pair of 0.68 stamps, and two fencers in action are shown on the 1.70 stamps.

Text and emblems appear in the selvage on the left side of each pane. The U.N. emblem is at the top and blue rings representing the International Olympic Committee are at the bottom.

Appearing between the two emblems are the title “Sport for Peace” and these four paragraphs:

“Sport is a universal language and powerful tool for peace. It is based on universal values such as fair play, teamwork, tolerance and equality.

“It brings people together for friendship, solidarity and, above all, peace.”

“The United Nations and the International Olympic Committee have long enjoyed strong ties by cooperating on several initiatives which use sport to build a more peaceful and better world.

“In this spirit, the two organizations work together to promote the Olympic Truce in the global call to cease all hostilities worldwide during the Olympic and Paralympic Games.”