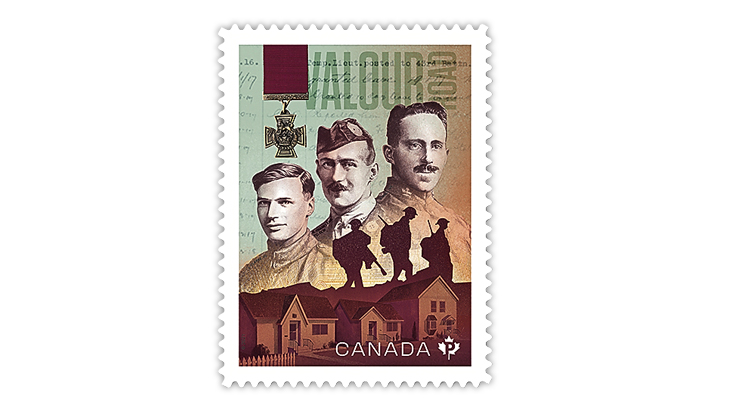 On Oct. 21 Canada Post issued a stamp to honor three Canadian servicemen who lived on the same street in Winnipeg, Manitoba, and were awarded the Victoria Cross for bravery in combat during World War I. Shown left to right on the stamp are Lionel “Leo” Cl

Three Canadians who grew up on Pine Street in Winnipeg, Manitoba, served during World War I and received the Victoria Cross for gallantry in combat are pictured on a new stamp issued Oct. 21 by Canada Post.

“A commemorative plaza erected nearby in 2005 features a stone monument in the shape of the Victoria Cross and three steel silhouettes honouring the soldiers of Valour Road.

“The stamp design features the three heroes, the Victoria Cross medal, the silhouette created to mark their courage, and artistic interpretations of their homes on the former Pine Street.”

Fewer than 100 Canadians have been awarded the Victoria Cross since it was established 1856. It is the British Commonwealth’s “highest military decoration for bravery in combat,” Canada Post said.

The Valour Road stamp was designed by Soapbox Design and illustrated by Richard Nalli-Petta. The portraits on the stamp were inspired by archival photographs.

The stamp was issued in self-adhesive booklets of 10 and a water-activated pane of five. Print quantities are 22,500 booklets and 35,000 panes.

A set of three first-day covers is also available. Each FDC is franked with a single Valour Road stamp and features an allover illustrated cachet specific to one of the three soldiers on the stamp.

Leo Clarke lived on Pine Street as a teenager and served as a railway surveyor before enlisting in February 1915.

Clarke distinguished himself during the arduous and bloody Battle of the Somme in 1916.

According to Canada Post, “Clarke and a small section of the 2nd Canadian Infantry Battalion were assigned to clear a German trench line near Pozieres, France. After every man but Clarke was killed or severely wounded in the operation, he held off a German counterattack despite a bayonet wound to his leg.”

Clarke was killed during combat not long after being promoted to sergeant. His Victoria Cross was given posthumously to his father, Henry Clarke.

Robert Shankland immigrated to Canada in 1911 and enlisted with the 43rd Canadian Infantry Battalion in December 1914.

“During the Battle of Passchendaele in 1917, Shankland’s platoon and supporting soldiers were reduced to a remnant — but they had won a foothold on the strategic Bellevue Spur ridge,” Canada Post said.

“Shankland led the surviving force against a fierce counterattack, holding the position. He then made his way through thick mud and shelling to battalion headquarters to report on the Germans’ position.”

Shankland received the Victoria Cross from King George V in 1918. Two years earlier, in 1916, he was awarded the Distinguished Conduct Medal “for leading stretcher-bearers under heavy fire,” according to Canada Post.

Frederick Hall, who immigrated to Canada in 1913, worked as a shipping clerk when he lived on Pine Street. He enlisted with the 8th Canadian Infantry Battalion not long after war was declared and rapidly rose through the ranks.

“During the Second Battle of Ypres in Belgium in 1915, Hall and two others attempted to rescue a wounded soldier less than 15 metres outside their trench,” Canada Post said.

“Earlier that day, Hall had rescued two other injured men on the battlefield. After heavy machine-gun fire wounded the other two soldiers and sent Hall back for cover, Hall tried again, reaching his comrade. As Hall began to lift him, he and the soldier were killed.”

Hall’s Victoria Cross was presented posthumously to his mother, Mary Hall, along with a letter from King George V.