Vatican is sued over artwork on 2020 Easter stamp 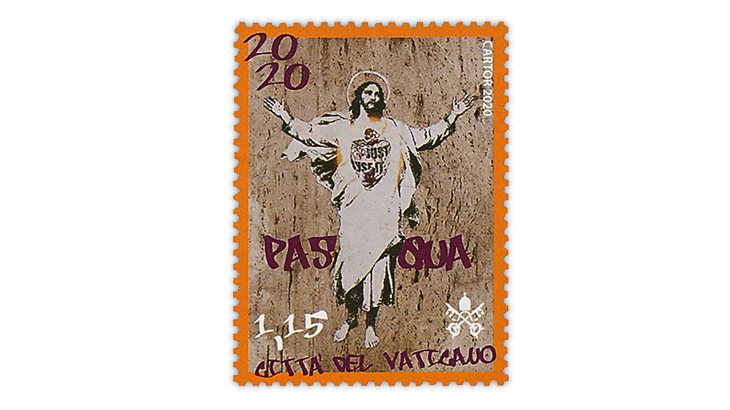 The Vatican City’s 2020 Easter stamp shows street art created by Alessia Babrow in 2019. She has filed suit against the Vatican City’s communications office for using the image without her permission.

An artist is suing the Vatican City’s telecommunications office for featuring her artwork on an Easter stamp without permission or attribution.

In announcing the stamp last year, the Vatican City’s Office of Philately and Numismatics described the stamp as depicting “a reworking — in the form of street art — of the Ascension by Heinrich Hofmann (1824-1911) located in Rome, near Ponte Vittorio Emanuele II.”

According to the May 25 report by Nicole Winfield, an Associated Press correspondent who covers the Vatican and Italy, Babrow “was shocked to learn that the Vatican had apparently used a reproduction of the image, which featured Babrow’s hallmark heart emblazoned across Christ’s chest” for the stamp.

Written across this heart in English is “Just Use It.”

Winfield reported that Babrow sued the Vatican City’s telecommunications office in a Rome court in April, “alleging it was wrongfully profiting off her creativity and violating the intent of her artwork. The lawsuit, which is seeking nearly 130,000 euros ($160,000) in damages, said the Vatican never responded officially to Babrow’s attempts to negotiate a settlement after she discovered it had used her image without consent and sold it.”

Babrow created the small (13.8 inches high) image on paper and glued it to the bridge in February 2019, according to Winfield. Babrow also showed a photo of the image on her Facebook page on March 20, 2019.

Italian websites and blogs have been covering the story about the artwork on the Easter stamp since last year.

For example, Danilo Bogoni posted an article on the ArtsLife website on Feb. 26, 2020, explaining how it came to be shown on the stamp. (At the time the article was posted Bogoni did not know who had created the original artwork.)

Bogoni wrote, “It was Mauro Olivieri of the Vatican Philatelic and Numismatic Office who ‘discovered’ the work completely by chance.”

Bogoni added that Olivieri was riding his moped when he noticed the small mural, stopped and photographed it with his cell phone. Olivieri later submitted the image for use on the Easter stamp.

A follow-up post on March 2, 2020, reported that the artwork was created by Babrow. On April 24 of this year, the ArtsLife website reported on the lawsuit.

Cartor Security Printing in La Loupe, France, printed the stamp in an initial quantity of 80,000. In addition to showing Babrow’s image of Jesus, the design includes the Italian word for Easter (Pasqua), an image of the crossed keys of St. Peter, the name of the issuer (Citta’ Del Vaticano), the name of the printer, the year date, and the denomination.

The stamp reportedly was still on sale at the Vatican post office at least one week before the May 25 Associated Press report.