Vehicles of the British army on 12 new British stamps 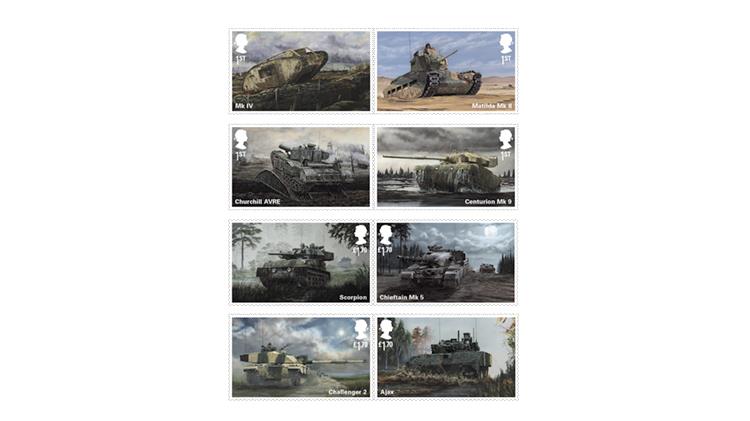 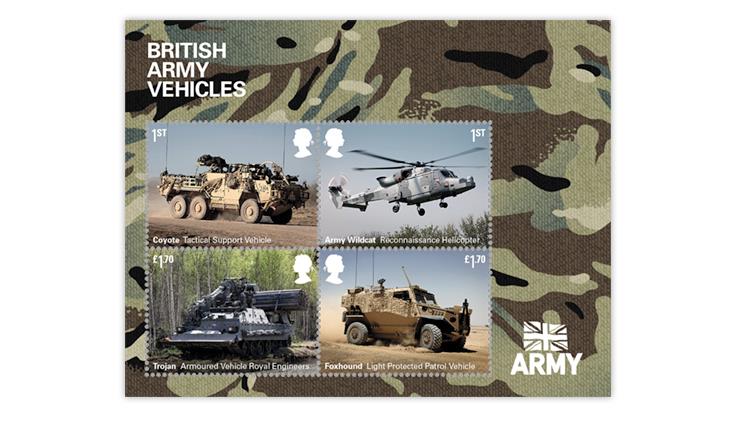 Eight different armored vehicles (tanks and other armored transports) are shown on four se-tenant (side-by-side) pairs, and a souvenir sheet of four illustrates three additional support vehicles and a helicopter.

Royal Mail worked closely with the British Ministry of Defence to plan and develop the British Army Vehicles stamps.

“A further four stamps, presented in a miniature sheet, include a range of specialist support and patrol vehicles used by the British Army.”

Matt Parkes, director of stamps and collectibles at Royal Mail, said: “These are some of the most important vehicles that have served the British Army since the First World War. Their impact both in combat and the development of armoured vehicles cannot be underestimated — and it is for this reason we mark these vehicles with a set of Special Stamps.”

Military artist Mick Graham created the illustrations on seven of the eight stamps in the se-tenant pairs. According to Royal Mail, Graham served for 15 years with the 4th Royal Tank Regiment. He was a gunnery instructor on Chieftain tanks before launching his career as an artist.

The Mark IV tank and the Matilda Mark II tank are shown on one of the two pairs of nondenominated (85 pence) first-class stamps.

More than 1,200 Mark IV tanks were constructed, making it the most used British tank before the end of World War I. Despite concerns about cost and utility, “the Mark IVs were to prove their worth in a mass attack by over 400 at Cambrai in November 1917,” Royal Mail said.

The Matilda Mark II was put into production shortly before World War II. It was a heavily armored tank, which meant that it moved at slower speeds. This enabled it to support infantry units moving on foot.

During WWII, the Matilda achieved success against Italian forces in North Africa, earning it the moniker “The Queen of the Desert.”

“Its small turret prevented the fitting of a larger gun, so from 1942 the Matilda was relegated to use in the Far East, where the Japanese fielded only lighter tanks,” Royal Mail said.

Pictured on the second pair of first-class stamps are the Churchill AVRE (Armored Vehicle Royal Engineers) and the Centurion Mark 9 tank.

D-Day, June 6, 1944, marked the debut of the formidable Churchill AVRE. Various fixtures on the tank could be adapted for different conditions such as carrying large loads or laying demolition charges.

The Centurion Mark 9 tank, which first saw service during the Korean War, is still in service today. It was the British response to the German Panther tank that was used on the Eastern and Western Fronts in Europe during WWII.

Royal Mail notes that the Centurion Mark 9 “went through 13 marks (or models) in British Army service, showing an ability to be upgraded. It started with a 17-pounder gun, then a 20-pounder, followed by the very successful L7 105mm gun.”

Pictured on the first pair of £1.70 stamps are the Scorpion tank and the Chieftain Mark 5 tank.

The Scorpion tank was developed in the 1960s using a framework of common parts and is still in service today. Its 76-millimeter gun could fire different types of ammunition, and its aluminum armor kept weight down, which allowed the tank to achieve a top speed of 45 mph.

“Two Scorpions could fit inside a C-130 Hercules transport plane, and the original width specification was to allow it to pass through Malaysian rubber plantations,” according to Royal Mail.

Scorpions saw action with the British army during the 1982 Falkland Islands conflict and the 1990-91 Gulf War. The tank was withdrawn from service in 1994.

With its superior firepower and enhanced armor, the Chieftain Mark 5 was a fixture during the Cold War for the British army.

The Chieftain Mark 5 carried a 120-millimeter gun that was incredibly accurate. However, its Achilles’ heel was its L60 engine, which was notably unreliable.

Introduced in 1967, the Chieftain went through a dozen upgrades before being removed from service in the late 1990s.

The Challenger 2 tank and the Ajax armored vehicle are illustrated on the second pair of £1.70 stamps.

Following rigorous and thorough testing in 1998, the Challenger 2 was incorporated into British army regiments.

“When going into action, extra armour can be fitted to the [Challenger 2] tank, along with a range of other devices, such as electronic countermeasures,” Royal Mail said. “As with many tanks, the vehicle is being upgraded to respond to new threats and challenges on the modern battlefield.”

The Ajax is a new addition to the British army’s vehicle fleet. Its cutting-edge features include advanced intelligence, surveillance, target acquisition and reconnaissance (ISTAR) capabilities, a telescoped armament system capable of firing different types of ammunition, and various defensive systems for threat detection.

According to Royal Mail, “The Ajax family consists of six variants based on a common chassis.” These variants are Ajax, Ares, Argus, Athena, Atlas and Apollo.

The six-wheel Coyote can carry heavier loads and up to five soldiers. Known for its excellent off-road performance, the Coyote is used for patrolling and reconnaissance.

Among the chief roles of the Army Wildcat helicopter are airborne reconnaissance, command and control, and troop transport. It also is configured to carry a “sophisticated battlefield surveillance system,” according to Royal Mail.

Clearing obstacles is the primary mission of the Trojan armored vehicle. The front of the vehicle can be fitted with a bulldozer blade or a mine plow. It can also use its excavator arm to “position a fascine — a large bundle of plastic pipes — in a gap to allow other vehicles to cross,” Royal Mail said.

With a top speed of 70 mph, the Foxhound patrol vehicle has a special V-shaped underside that can deflect the blast from a mine or improvised explosive device. This speedy vehicle carries a crew of two and can transport a maximum of four troops in its rear compartment.

Royal Mail Group Ltd. designed the eight British Army Vehicles stamps using the exclusive artwork by Graham for all but the Challenger 2 stamp.

International Security Printers printed all 12 British Army Vehicles stamps by lithography. The eight stamps in se-tenant pairs of stamps were issued in four sheets of 48 (sold in panes of 24 at most postal outlets). Each stamp measures 50 millimeters by 30mm and is perforated gauge 14.

All 12 British Army Vehicles stamps are moisture-activated with PVA gum, according to Royal Mail.

The text of the presentation pack was written by David Willey, curator of the Tank Museum in Bovington, Dorset, England. “The presentation pack explores the evolution of armoured vehicles from WWI, through WWII and into the Cold War,” Royal Mail said.